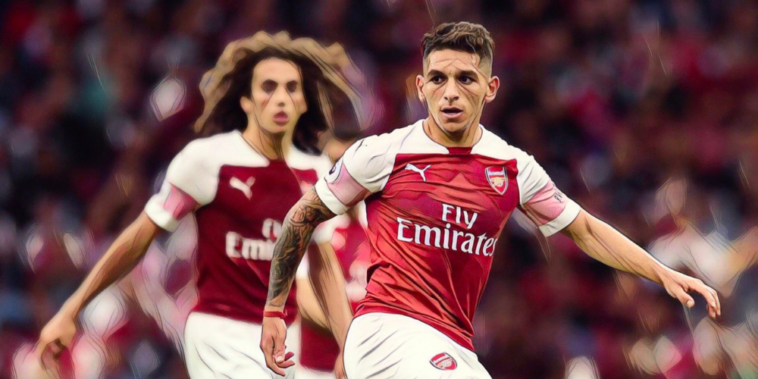 After several seasons of stagnation, things appear to be moving in the right direction at Arsenal with the club’s summer business raising hopes – and expectations – of a Champions League return.

The recent upturn under Mikel Arteta is a world away from sub-standard recruitment of previous regimes, including the incomings of former head of recruitment Sven Mislintat.

The former Borussia Dortmund chief was in charge of Arsenal’s business between December 2017 to February 2019 and signed eight players during his time at the Emirates. Just three-and-a-half seasons after his departure, each of those eight have now moved on with Bernd Leno and Lucas Torreira the last of Mislintat’s signings ushered out the exit door.

Those eight players were bought and sold at a total loss in excess of £100m and we’ve decided to rate each signing from a forgettable regime.

Here are our ratings of every Arsenal arrival during Sven Mislintat’s time as head of recruitment.

The biggest success story of Mislintat’s tenure, even if his exit came in acrimonious fashion. Arsenal raided Mislintat’s former club Borussia Dortmund to sign Aubemayeng, breaking the club’s transfer record to secure a £56m deal for the forward.

The Gabon international had scored 141 goals in 213 appearances for Dortmund and finished ahead of Robert Lewandowski as the Bundesliga’s leading scorer in 2016/17.

Aubameyang hit the ground running in the Premier League with ten goals in 13 games during his first six months in north London, before maintaining that form into his first full campaign.

Aubameyang ended the 2018/19 campaign as the joint-leading scorer in the Premier League to win a share of the division’s Golden Boot, as he hit 60 goals across his first two full seasons with the Gunners.

His performances saw the forward named as club captain and he inspired Arsenal to FA Cup success in 2019/20, scoring both goals in the final win over Chelsea at Wembley.

However, just 18 months later he was allowed to leave, following a dip in form and his removal as captain for alleged disciplinary breaches. He joined Barcelona on a free transfer in January 2022, having scored 92 goals in 163 appearances for the club.

A bagful of goals, but a £56m loss on the club’s accounts.

Arsenal agreed a deal to sign Lucas Torreira from Sampdoria in 2018, with the Uruguayan signed to add bite into the club’s midfield.

Torreira began brightly in the Premier League and scored his first goal for the club in a memorable north London derby win over Spurs.

He suffered a serious ankle injury during his second campaign and struggled to regain favour under new manager Mikel Arteta, before being allowed to leave on loan for Atletico Madrid in 2020/21.

Torreira spent the 2021/21 campaign on loan at Fiorentina before a permanent move to Galatasaray this summer. His £5.8m exit means the Gunners made a £20.2million loss on the midfielder.

The Germany international signed in a £22.5m deal from the Bundesliga side and immediately became a regular. Leno made 117 appearances across his first three seasons in north London, but lost his place in the side following the arrival of Aaron Ramsdale in 2021.

Having been signed as a modern sweeper-keeper, he instead fell to second choice due to Ramsdale’s superior distribution. In search of regular minutes he signed for Fulham in an £8m deal this summer, handing Arsenal’s balance sheet another sizeable loss.

Mislintat regularly looked to familiar faces during his time at Arsenal, with three of his eight signings having had previous connections to Borussia Dortmund.

The Gunner signed Sokratis from the Bundesliga side in 2018, securing the signature of the Greece international for a fee of £17.6m.

Sokratis largely failed to convince across his three-and-a-half seasons at the Emirates, with Arsenal keeping just nine clean sheets in the centre-back’s 44 league appearances.

Having failed to make an appearance across the first half of the 2020/21 season he was allowed to join Olympiacos on a free transfer in January 2021, after his contract was cancelled by mutual consent.

Talented but temperamental, Matteo Guendouzi made quite the impression during his time at Arsenal. The French midfielder was signed in a £7m deal from Lorient and made 48 appearances in all competitions during an encouraging debut campaign.

However, a fall-out with Mikel Arteta saw Guendouzi ostracised from the squad. The Arsenal boss was unhappy with the player’s conduct after clashing with Neal Maupay in a 2-1 defeat at Brighton.

Guendouzi joined Hertha Berlin and Marseille on loan spells across the following two seasons, before joining the latter on a permanent deal in 2022. The £9m fee ensured Guendouzi was one of just two Mislintat-signed players to return Arsenal a profit. Just.

Mavropanos was brought in as one for the future from PAS Giannina with Mislintat seeing potential in the Greek teenager.

The centre-back struggled to make a breakthrough however, and made just eight appearances for the Gunners in all competitions. He spent time on loan with FC Nürnberg and Stuttgart before signing for the latter on a permanent basis in a deal that earned Arsenal a profit of £1.5m.

The man behind the deal? Sven Mislintat.

Lichtsteiner came as an experienced back-up from Juventus, arriving on a free transfer before leaving for nothing a season later.

In between were a series of sub-standard showings from a full-back past his best, but Mislintat remains convinced that the Swiss defender was an astute piece of business.

“(Petr) Cech and Lichtsteiner are prototypes of winners. They improve your whole team with their mindsets, just being in the dressing room,” Mislintat told The Athletic in 2021.

“That’s why we added Stephan. He played 23 games in all competitions, he was meant as a back-up and came on a free. Tactically, he’s one of the best full-backs ever.”

That last line sounds like a huge claim to us.

Another of the ex-Dortmund alumni, Arsenal signed Mkhitaryan in a high-profile swap deal that saw Alexis Sanchez head in the opposite direction to Manchester United.

The Armenian had sparkled across his time in the Bundesliga, including a brilliant final season that saw Mkhitaryan score 23 goals in all competitions and finish as the league’s leading assist provider in 2015/16.

The midfielder struggled to replicate that form at United and similarly struggled for consistency at Arsenal, mixing moments of real quality with ineffective performances.

He scored nine goals in 59 appearances for the Gunners before joining Roma on a free transfer.