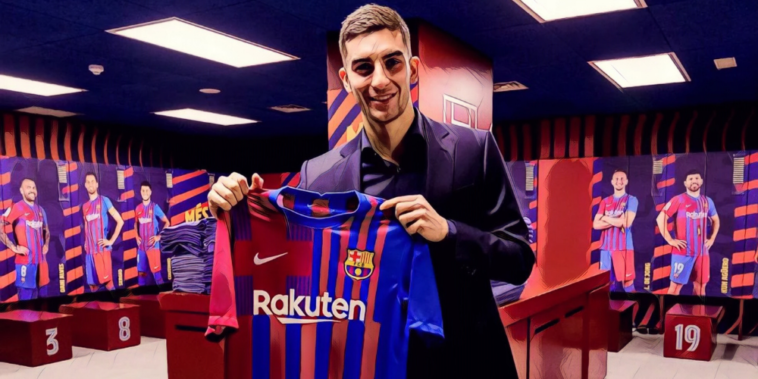 Barcelona are in a financial mess right now, the mismanagement of the cash-strapped Catalan club having led to a decline in their on-pitch fortunes.

Central to the Spanish side’s demise has been their woeful recent record in the transfer market, splashing out huge sums on players who have failed to prove worth their exorbitant outlay.

Barcelona will be hoping that Ferran Torres can be an improvement on previous big-money signings, having secured a €55m deal to sign the forward from Manchester City this month.

The deal for Torres makes him the ninth most expensive player in the club’s history and following his arrival at the Camp Nou we’ve decided to rate the club’s biggest buys (prices according to transfermarkt).

Perhaps amongst the most forgettable of Barcelona’s biggest buys of recent years, the Spanish side hijacked Roma’s deal for the Bordeaux winger to sign Malcom in a €41m (£36.5m) deal.

The Brazilian had impressed with his performances in Ligue 1 but was barely afforded an opportunity following his move to Barcelona, starting just six league fixtures and scoring once during a disappointing single season in Spain.

He was allowed to move on at the end of the campaign and signed for Zenit Saint Petersburg in a €40m deal as Barcelona recouped their investment, with Malcom having since scored ten goals and provided 14 assists in 60 appearances for Zenit, winning two Russian Premier League titles.

Barcelona will be hoping Torres can prove a shrewd signing, having invested €55m to sign the forward from Manchester City this month.

Torres impressed despite limited involvement during his first season in English football, scoring 13 goals across all competitions and becoming a regular in the Spain national side.

Having began as a winger, he has featured in a central role for La Roja and has compiled a goalscoring record of 12 goals in 22 games for the national side.

Whilst too soon to provide a rating for Torres following his recent arrival, he adds to a strong contingent of home-grown prospects at the Camp Nou with the likes of Pedri, Ansu Fati and Gavi all expected to be crucial components of both Barcelona and Spain in the coming seasons.

Miralem Pjanic’s move to Barcelona was an example of the short-sighted nature of past regimes, securing a swap deal for the 30-year-old midfielder that saw Arthur head in the opposite direction.

Whilst Pjanic had been a proven performer across nine seasons in Serie A with Roma and Juventus, it was a short-term deal that failed to work out as the Bosnian midfielder struggled at Barcelona.

Pjanic spent just one disappointing season in Catalonia before being loaned to Besiktas as the Spanish side desperately sought to lower their wage bill. The midfielder has recently warned former Juventus teammates Alvaro Morata and Matthijs de Ligt – each rumoured to be transfer targets for Barcelona – over the potential pitfalls of moving to Spain.

Pep Guardiola sanctioned the €70m signing of Zlatan Ibrahimovic in 2009, a deal that saw Samuel Eto’o head to Inter Milan in part-exchange and brought one of Europe’s most intriguing talents to the Camp Nou.

Ibrahimovic has scored goals at every port of call in his nomadic career across Europe’s superpowers and netted 21 goals in 45 games during his single season at Barcelona.

Lionel Messi’s desire for a central role also proved problematic in fitting the egotistical Swede into the side and he was allowed to join AC Milan on loan the following season, before joining the Rossoneri on a permanent deal at a huge loss.

Ibrahimovic has scored 329 club goals since his exit from Barcelona and continues to operate in one of Europe’s top five leagues despite turning 40 in October. He was, however, the wrong fit at the wrong time for Barcelona.

Luis Suarez arrived at Barcelona from Liverpool after completing one of the Premier League’s great individual seasons in 2013/14, scoring 31 league goals in 33 games to win the division’s Golden Boot and European Golden Shoe.

Suarez scored 25 goals as Barcelona won a La Liga, Copa del Rey and Champions League treble during his debut season, netting in the latter final as Juventus were beaten in Berlin.

The following campaign saw the Uruguayan score a staggering 59 goals in all competitions, finishing as the leading scorer in Spanish football – the sole winner of the Pichichi Trophy outside of Cristiano Ronaldo and Lionel Messi in the past 12 years.

Suarez scored 198 goals for Barcelona across six seasons and is the club’s third-highest goalscorer of all-time, departing for Atletico Madrid in 2020 where he helped the capital club to title success last season.

Having flourished as part of a talented Ajax side, Barcelona beat off competition from Europe’s leading clubs to sign Frenkie de Jong in 2019.

The midfielder’s technical talents appeared ideally suited to Barcelona’s long-held principles, but his arrival has coincided with the team’s decline and had an adverse impact on his showings.

Despite bright moments the Netherlands international has failed to truly justify his outlay and hopes will be high that new manager Xavi, perhaps the perfect coach to guide the 24-year-old, can bring the best from De Jong in a new-look side.

Barcelona won the race to sign Neymar from Santos in 2013, with the forward having risen to prominence as Brazil’s brightest young talent.

After a period of adaptation in Spain he became an increasingly influential figure at the Camp Nou, dovetailing to electrifying effect with both Lionel Messi and Luis Suarez in Catalonia.

He starred during Barcelona’s run to Champions League success in 2014/15, netting in the final win over Juventus and finishing as the tournament’s joint-leading scorer.

Neymar scored 105 goals across four seasons with Barcelona to establish himself amongst the word’s finest footballers, before moving on to Paris Saint-Germain after the Ligue 1 side broke the world transfer record to secure his signing.

His £198m move to Paris earned Barcelona a huge profit after four seasons of stellar service, a rarity in their modern recruitment.

Antoine Griezmann arrived at Barcelona as one of La Liga’s best talents, having starred during spells with Real Sociedad and Atletico Madrid.

The Catalans spent €120m to prise the France international from the latter, but he failed to find his feet in the presence of Lionel Messi at the Camp Nou.

The transition from star talent to supporting cast at Barcelona proved challenging for Griezmann who scored 35 goals in 102 games, before being loaned back to Atletico in 2020 as the club look to cut their wage bill.

Having netted 20+ goals in five consecutive campaigns at Atletico it was a modest return for a player of his talent.

Barcelona’s signing of Ousmane Dembele was a deal that stunned Europe, securing a €135m deal for the winger who had spent just one season with Borussia Dortmund.

With the market inflated following Neymar’s world-record exit from the Camp Nou, the Catalans splashed a sizeable chunk of that income on Dembele after the youngster had starred during the Bundesliga campaign.

It has proven a frustrating period for the France international – part of Les Bleus’ 2018 World Cup-winning squad – in La Liga, however, with an inability to keep fit hindering his chances of making a genuine impact.

He has won two La Liga titles but a return of just 55 league starts in four-and-a-half seasons tells the story of his time in Spain, whilst he could walk away – aged just 24 – on a free transfer this summer after failing to agree terms on a new deal.

Philippe Coutinho appeared the perfect player for Barcelona for much of his time in the Premier League, with the Catalans splashing out a record fee to sign the Liverpool midfielder.

The Brazilian’s technical talent and penchant for the spectacular had attracted Catalan interest, but after a bright start he struggled to establish himself and has been viewed as one of the club’s greatest market mistakes.

Coutinho spent the 2019/20 season on loan at Bayern Munich and has failed to regain his place on a regular basis after returning to the Camp Nou, with a loan return to England to link up with former Reds teammate Steven Gerrard at Aston Villa having dominated the headlines this week.

Read  – One ideal January signing for each ‘big six’ side