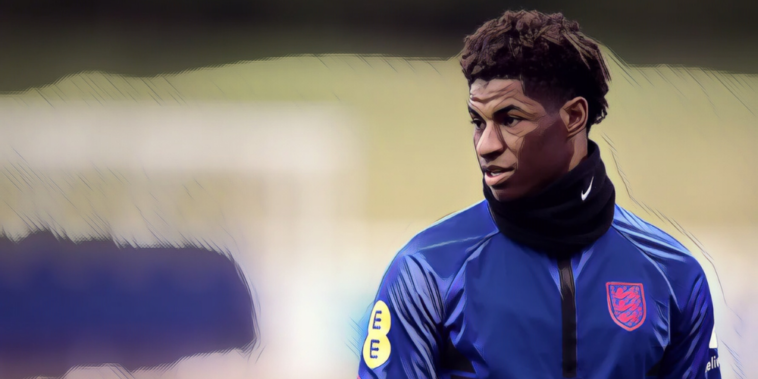 Marcus Rashford insists there is ‘no point fearing the past’ and has urged England to make ‘history’ against Germany on Tuesday.

England face their old rivals at Wembley in the last 16 of Euro 2020 next week, with the Three Lions looking to improve a poor record against Germany in the knockout stages of major tournaments.

England have not beaten Germany in the knockout stages of a major tournament since the 1966 World Cup final on home soil, with the latter emerging victorious in semi-final clashes in both 1990 and 1996, in addition to a 4-1 thrashing of Fabio Capello’s side at the 2010 World Cup.

Rashford insists his side will not fear the past however, insisting Gareth Southgate’s team have been handed an opportunity to make their own ‘history’ next week.

“We are being put in a position where we are blessed to be part of that history,” Rashford told the Guardian. “Our main focus is to win the game, but if we do, it gets put in history. That’s how great teams are remembered for many, many years. There is no point fearing the past. You can’t go back and change it. What we can change is the result of the next game and put ourselves in the best possible position to win.”

Rashford has been struggling with a shoulder injury during the finals and is yet to have started a fixture at Euro 2020, though the 23-year-old says a decision has not yet been made on whether the problem will require surgery following the tournament.

Rashford also admitted he has been disappointed with his own performances and says he has been managing the issue throughout the season, insisting he has not regrets about not taking time to sort his shoulder and that he wants to be available for every game.

“I am not performing at my best,” he said. “It has been going on since early on in the season. I managed to get through the season with United. I think I had 36 goal involvements so I can’t look back at the year and say: ‘Mmm, I should have taken time off to do this and do that.’ That’s just not the way I look at things. I just want to be available for every game.”

England’s clash with Germany represents one of the most challenging last 16 ties after being drawn to face the runners-up from the tournament’s ‘Group of Death’, though the Manchester United star says the Three Lions ‘have to beat the best teams’ to win Euro 2020.

“We know to win the tournament we are going to have to beat the best teams,” he said.

“We have to bring the best version of us. We want to win the ‘England Way’ – show some good football, work hard for each other and score and create goals.”