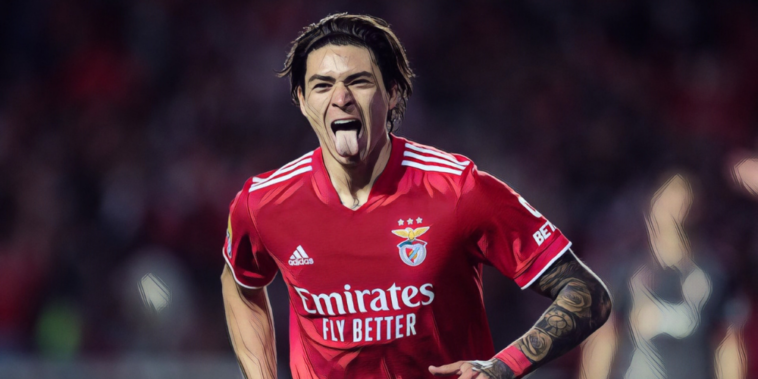 European football’s goalscoring charts have been dominated by familiar faces across the past decade, but there is a new wave of emerging talent bidding to become the goalscoring greats of their generation.

There will be a time in the not too distant future when the likes of Cristiano Ronaldo, Lionel Messi, Robert Lewandowski and Karim Benzema are no longer tormenting defences.

We’ve decided to look at the next wave of prolific prospects and rank the u23 players playing in top-flight European leagues with the most goals scored in all competitions in 2021/22.

Erling Haaland is a name who needs no introduction following his explosion onto the European scene in recent seasons, the Norwegian having broken a whole host of records during a thrilling emergence.

Haaland has scored 23 goals across all competitions for Borussia Dortmund this season, despite seeing his season interrupted with fitness issues.

The 21-year-old’s 23 goals have come in just 21 appearances and he has averaged a goal-per-game in his 80 appearances for Dortmund since arriving from Red Bull Salzburg.

Haaland became the fastest footballer to reach 20 goals in the Champions League (14 appearances) on his way to finishing as the competition’s leading scorer last season and the forward is expected to secure a move away from the Westfalenstadion when his €75m release clause becomes active this summer.

Real Madrid and Manchester City are understood to be leading the race to sign a talent who could break countless goalscoring records across the next decade.

Dusan Vlahovic’s performances have seen the Serbian striker emerge as one of the most exciting young talents in European football, having enjoyed a prolific period in Italian football.

The 22-year-old equalled Cristiano Ronaldo’s calendar year record for Serie A goals in 2021, having netted 33 league goals for Fiorentina.

Those performances persuaded Juventus to secure his signing in a €70m deal in January and he has made a promising start to his career with the Bianconeri, netting four goals from seven starts.

He took just 32 seconds to score on his Champions League debut for the club against Villarreal last month and is one behind Ciro Immobile in the race for the Capocannoniere award as Serie A’s leading scorer.

Kylian Mbappe has achieved an awful lot in football at the age of 23. Having burst onto the scene at Monaco, the forward has since developed into one of world football’s most exciting talents since swapping the principality for Paris.

Mbappe has scored 158 goals in just 207 appearances for Paris Saint-Germain, with only Edinson Cavani having ever netted more for the Ligue 1 side.

Winner of the Golden Boot in France in each of the past three seasons, he leads the rankings once again in pursuit of a fourth accolade and has 26 goals for the campaign in all competitions.

Add in a World Cup winners’ medal and a record of 56 goal involvements in 53 career appearances in the Champions League and Mbappe has already evolved into one of the world’s best.

Real Madrid will be relishing the prospect of him illuminating the Bernabeu next season if, as expected, he completes a free transfer move to the Spanish capital.

Nunez scored 14 goals during his debut campaign at Benfica last season, but has reached new levels during the current campaign and has 26 from just 33 appearances in all competitions.

Benfica break the deadlock in Amsterdam! 😤

Onana comes out to try and catch Grimaldo's free-kick, but it's Darwin Nunez who pounces first and powers home a header.

A HUGE goal in the tie 💥#UCL pic.twitter.com/6WB90JCnH4

The leading scorer in the Primeira Liga has averaged a goal every 119 minutes in Portugal’s top flight this season and there is reason why West Ham were strongly interested in signing the Uruguayan during the January transfer window.

If he continues at his current rate, however, his price-tag will increase considerably ahead of the summer.

Arthur Cabral’s blistering form for Basel attracted interest from Europe in January, with Fiorentina completing a €16 million deal for the Brazilian.

Cabral arrived as a replacement for the aforementioned Vlahovic after scoring 27 goals in 31 appearances for the Swiss side across the first half of the campaign, enjoying a particularly productive period in Europe with 13 goals in 12 Europa Conference League appearances.

No u23 player playing in a top-flight European league has scored more goals in all competitions this season than Cabral, who earned a first call-up to the Brazil squad during October’s internationals.

He has scored once in five appearances for Fiorentina and will be now hoping to replicate his prolific period at Basel after stepping up to a major European league.