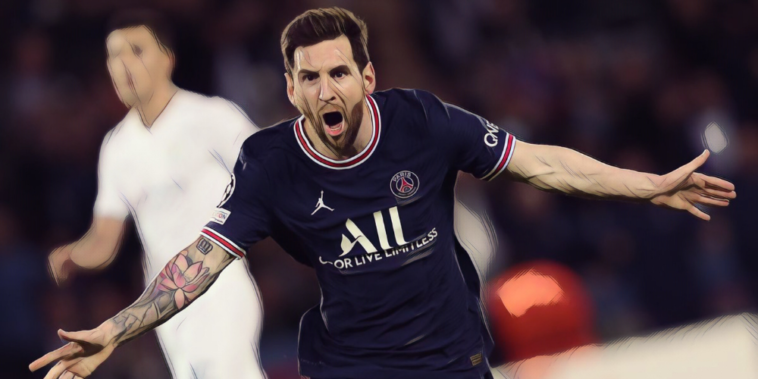 Manchester City face Paris Saint-Germain in the Champions League this week, with the former tasked with stopping Lionel Messi at the Etihad.

Messi scored in the reverse fixture between the two teams and has compiled an excellent goalscoring record against English opposition in the Champions League, one the six-time Ballon d’Or winner will be hoping to extend against the Premier League champions.

Ahead of the clash we’ve looked at the most prolific players against English sides, here are the players with the most Champions League goals scored against Premier League teams.

One of the finest forwards of his generation, the Uruguayan currently scores goals in the colours of an English side after signing for Manchester United in 2020.

Prior to his move to the Premier League however, Cavani was a regular menace of English defences in Europe and has scored eight career goals against Premier League teams in the Champions League.

He netted his very first goal in the competition for Napoli against Manchester City in 2011, with the Cityzens and Chelsea his preferred opponents, scoring three times against each side.

Karim Benzema has also scored eight Champions League goals against English teams, his haul including a final effort as Real Madrid defeated Liverpool in the 2018 showpiece.

Benzema has scored four of his eight goals against Liverpool, part of an overall haul of 75 goals in the Champions League – the fourth-highest tally in the competition’s history.

The France international is also one of just two players – alongside Lionel Messi – to have scored in 17 consecutive Champions League campaigns.

Benzema, who has won the trophy four times during his glittering career at the Bernabeu, has already netted four times from four appearances in the 2021/22 season.

Samuel Eto’o ranks alongside both Cavani and Benzema on eight goals, with the Cameroon international having been a prolific presence on the European stage for Barcelona and Inter Milan.

Eto’o twice won the competition during his time at the Camp Nou, scoring in final successes against both Arsenal and Manchester United as Barcelona ruined English dreams of conquering Europe.

The forward also scored against Chelsea – a side he would later sign for during a short spell in the Premier League – during Inter Milan’s run to success during the 2009/10 edition of the tournament.

The fourth footballer to have scored eight UCL goals against Premier League teams, Rivaldo was a regular scourge of English opposition during his period as one of the world’s best in the late nineties.

Rivaldo memorably scored twice during a thrilling 3-3 draw with Manchester United in 1998/99, a performance which contributed to his coronation as winner of the Ballon d’Or and FIFA World Player of the Year accolades later that year.

🔵🔴 Magic from Rivaldo at the Camp Nou! 👏👏👏 #UCL @FCBarcelona pic.twitter.com/pqofPqDbgL

The Brazilian also netted against Arsenal, Chelsea, Leeds and Liverpool in the Champions League, the latter a deflected free-kick for Olympiakos during a dramatic group stage tie at Anfield in 2004/05.

Thomas Muller is the third name on this list to have scored against an English side in a Champions League final, though the German’s effort ultimately proved in vain as Chelsea fought back to claim the 2012 trophy against Bayern Munich.

That goal was Muller’s first against Premier League opposition in Europe, with the Germany international having since scored a further nine Champions League goals against English sides.

Arsenal have been a favourite opponent of the forward despite their recent absence from the competition, Muller scoring five of his 10 goals against the Gunners.

His most recent effort against an English side came against Tottenham during the 2019/20 season, as Bayern twice beat the north Londoners in the group stages on their way to claiming the trophy.

Five of those goals came during Bayern’s run to success in the competition in 2019/20, scoring twice in the Bundesliga’s side’s memorable 7-2 thrashing of Tottenham in the group stages, before netting in both legs of the last-16 win over Chelsea.

The Poland international also scored in both legs of a convincing 10-2 aggregate win over Arsenal in 2016/17, with his current record standing at 81 goals from 100 UCL appearances.

No player has ever scored more goals across their first century of appearances in the competition.

The first three of those came in all-Premier League encounters on the Champions League stage, his first a towering header as Manchester United met Chelsea in the 2008 final in Moscow.

Ronaldo scored twice in the semi-finals as the Red Devils beat Arsenal the following season, before regularly haunting Premier League teams after leaving for Real Madrid in a world-record deal.

The Portugal captain – who returned to Manchester United during the summer – has twice scored against the Red Devils as an opposition player, netting for Real Madrid in 2012/13 and for Juventus in 2018/19.

Lionel Messi is far and away the leading UCL scorer against English sides, having scored a staggering 15 more goals than second-place Cristiano Ronaldo.

Messi has netted 27 goals in total against Premier League teams in Europe, including scoring in both finals as Barcelona beat Manchester United in 2009 and 2011 respectively.

Amongst Messi’s most iconic performances on the Champions League stage also came against English opposition, as the Argentine genius scored all four goals in a 4-1 quarter-final win against Arsenal in 2010.

Messi’s record against the Gunners stands at an impressive nine goals in just six appearances, whilst he also boasts a strong record against this week’s opponents having scored on seven occasions against Manchester City – including a hat-trick during the 2016/17 season.

His overall record stands at 27 goals from just 35 games against English teams, a phenomenal rate that he will be looking to continue at the Etihad.