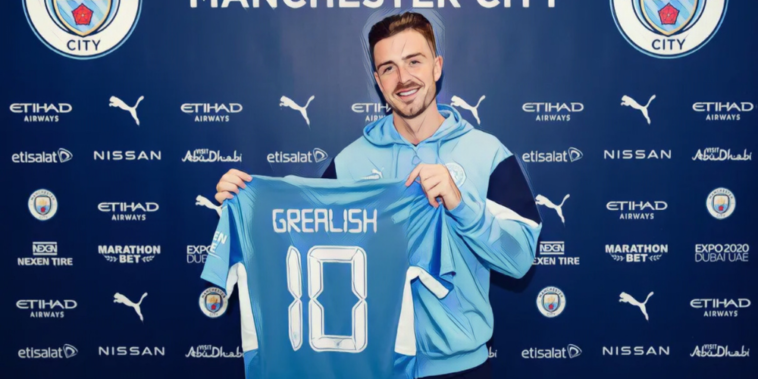 English talent often comes with a premium for Premier League clubs, who have spent huge fees on homegrown names in recent campaigns.

Raheem Sterling and Kalvin Phillips are the latest players to have moved for significant sums this summer, with the England internationals joining Chelsea and Manchester City respectively.

Sterling’s £47.5m move to west London is the second time the 27-year-old has made a major move between Premier League clubs and, following his latest big-money move, we’ve decided to look back at the most expensive English players of all time.

Wan-Bissaka had impressed after coming through the Eagles’ academy ranks, winning the club’s Player of the Year accolade during his final season at Selhurst Park.

The right-back was an almost ever-present during his first two seasons at Old Trafford, winning admirers for his strength in one-against-one duels.

However, the defender’s forward threat has been criticised and he fell out of favour in 2021/22, making just 20 league appearances for the Red Devils.

Wan-Bissaka’s lack of attacking impetus has seen his long-term future questioned and he has been linked with an exit this summer.

Raheem Sterling’s move to Chelsea has moved him inside the top 10 for a second time, though falls just short of the fee that took the winger from Liverpool to Manchester City in 2015.

Sterling excelled after swapping Merseyside for Manchester, where he won four Premier League titles and scored 131 goals in all competitions across his seven seasons at the Etihad.

He won the FWA Footballer of the Year and PFA Young Player of the Year award in 2018/19, before enjoying the most prolific campaign of his career with 32 goals the following season.

154 – Raheem Sterling finished on the winning side in 154 of his 225 appearances in the Premier League since signing for @ManCity in 2015-16, the most of any player:

The 27-year-old is an integral part of Gareth Southgate’s plans with England and has made 77 appearances for the Three Lions.

He will add an injection of quality into Thomas Tuchel’s plans after making another major move to Chelsea this summer.

Ben White’s rapid rise culminated in a £50m move to Arsenal last summer, becoming the fourth most expensive English footballer of all time.

White had shone during Leeds’ promotion to the Premier League in 2019/20, before earning a regular role with Brighton upon his loan return from Elland Road.

That win was needed!! A clean sheet was the icing on the cake. Lovely to hear you all at the Emirates today. pic.twitter.com/tLLCMG8McD

One season of Premier League football with the Seagulls was enough to convince Mikel Arteta and Arsenal, who spent £50m to bring White to north London.

The centre-back – who has earned four caps for England – made 37 appearances in all competitions for the Gunners last season, forming part of the team who narrowly missed out on Champions League qualification.

Manchester United secured the signing of Jadon Sancho from Borussia Dortmund last summer, after a long chase to sign the winger.

Sancho began his career at Manchester City before departing in search of first-team football, starring after a move to the Bundesliga.

Sancho provided 114 goals and assists in 135 appearances for Dortmund, a return which persuaded the Red Devils to spend £72.9m to bring the England international to the Premier League.

It's just the beginning for our no.25 📈#MUFC | @Sanchooo10 pic.twitter.com/aHDPFmqnK4

The 22-year-old endured a difficult debut season as United finished sixth in the Premier League and will expect improvement on a return of just three league goals in 2021/22.

Harry Maguire became the most expensive defender in football history in 2019, signing for Manchester United in a record-breaking £80m deal.

Maguire had impressed for England at the previous summer’s World Cup and was viewed as a long-term solution at centre-back, where his immediate impact saw the defender named as club captain during his debut campaign.

The 29-year-old has since made 144 appearances in all competitions for the Red Devils, but endured a disastrous 2021/22 campaign as he struggled for form and confidence.

Disappointing end to a season full of lows , we are so hurt with how this season as gone. The squad take full responsibility and we know that what we have shown is nowhere near good enough for this club. pic.twitter.com/Q8ZFBkfJ5K

Erik ten Hag has confirmed that Maguire will remain as club captain for the coming season, though his place in the side is far from assured without marked improvement from last season’s performances.

Grealish had become one of the division’s most influential talents at Aston Villa, but has taken time to settle since moving to the Etihad.

The 26-year-old made just 22 league starts last season and while a Premier League winners’ medal was vindication for leaving Villa, he will hope to make a greater contribution next season than the three goals and three assists he registered in 2021/22.