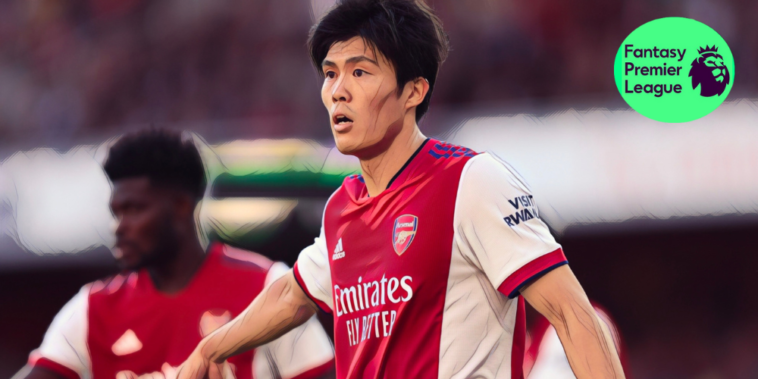 Finding a cheap asset who can contribution is key to success in Fantasy Premier League, with budget options allowing managers to invest in superstar signings elsewhere.

We’ve decided to pick out some of the low-cost defenders who have caught our eye following the new season’s launch, looking at five of the best budget defenders priced at £4.5m or under.

The best budget defenders in FPL:

If you’re looking a cheap route into the Premier League’s ‘big six’ and an almost guarantee of regular starts, look no further than Arsenal’s Takehiro Tomiyasu.

The Japan international made a big impression following his arrival from Bologna last summer, becoming an instant fans’ favourite in north London.

The 23-year-old’s missed much of the second half of the campaign with a calf problem, but will hope to return at full fitness this season and reestablish himself as Mikel Arteta’s first-choice right-back.

Tomiyasu lacks the attacking threat of other options at this price point with just one assist from 20 league starts last season, but the Gunners’ promising run of fixtures to start the season should make the defender a popular selection.

Tariq Lamptey has the potential to outperform his modest price-tag of £4.5m, in a Brighton team who will have ambitions of building on their best-ever Premier League finish last season.

Lamptey had a slow start to the 2021/22 campaign after missing the opening months through injury, but returned to feature regularly for a Seagulls side who had the sixth-best defence in the division, behind only the Premier League’s top four and Wolves.

The 21-year-old will hope to get back to his explosive best with a full pre-season of preparation, whilst he can expect to feature high up the pitch in Graham Potter’s preferred wing-back system.

Marc Guehi’s impressive debut season at Crystal Palace resulted in England honours, with the centre-back having earned three caps for the Three Lions since his debut in March 2022.

Signed in an £18m deal from Chelsea, the defender captained Palace for much of last season and will be a certain starter for Patrick Vieira’s team this season.

Palace posted a strong defensive record last season, particularly on home soil where their xGA (expected goal against) ranked behind only Manchester City and Liverpool.

Guehi’s return of 123 points in FPL last season was the second-highest total among defenders priced at £4.5m or under, behind centre-back partner and teammate Joachim Andersen (124).

Guehi possesses the greater threat from set-pieces however, having scored four goals in all competitions last season.

Rayan Ait-Nouri’s performances last season saw the wing-back linked with a summer exit from Wolves, with both Manchester City and Chelsea credited with an interest in the youngster.

Ait-Nouri is expected to command a regular role in the Wolves side once again this season and has the potential to earn returns at both ends of the pitch, with Bruno Lage’s side posting the fifth-best defensive record in the Premier League last season.

The 21-year-old registered one goal and two assists in 2021/22, but will hope to improve on those numbers after a season of top-level experience.

A lovely bit of skill from Rayan Ait-Nouri ✨ pic.twitter.com/XSFLkp9MNH

Ait-Nouri’s teammate, Jonny, will also attract interest at £4.5m and his ability to feature on both flanks could aid his cause for more minutes. The latter scored twice in 10 league starts after returning from injury last season and boasts a better goal threat, but Ait-Nouri’s 4.8 crosses per 90 far outweigh Jonny’s 1.3 and point towards the potential for greater returns.

Neco Williams has emerged as a superb enabler in FPL, having completed a move from Liverpool to Nottingham Forest.

Williams will begin the game at the lowest price point given his peripheral status at Anfield, but he will be viewed as Forest’s first-choice at right-back next season.

I’m proud to announce I’ve signed for @NFFC ! Excited for this new challenge and to help this great club move forward in the @premierleague . Can’t wait to get going and to play in the famous city ground. Now it’s go time !!!🌳🔴 pic.twitter.com/xXLCLYv9fI

The 21-year-old scored twice and provided two assists in 14 league appearances for Fulham last season, having joined the Cottagers on loan for the second half of the Championship campaign.

He will be granted a licence to get forward in Steve Cooper’s system and represents the perfect low-risk enabler for FPL squads.