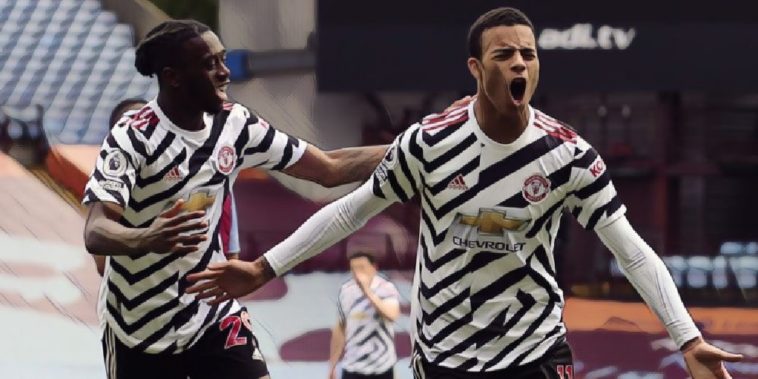 Mason Greenwood made more Manchester United history on Sunday, the forward netting his 16th league goal for the club to become the Red Devils’ highest scoring teenager of the Premier League era.

Greenwood has made a huge impact since coming through the academy ranks to establish himself as one of English football’s brightest young talents, bursting onto the scene with 17 goals in all competitions last season – a joint-record for a Manchester United teenager.

The 19-year-old’s goal against Aston Villa this weekend has now moved him outright for league goals by a teenager in the Premier League era and following his achievement we’ve decided to look back at United’s best teenage talents.

Here are the five teenagers with the most Premier League goals for Manchester United.

Cristiano Ronaldo signed for Manchester United as a precociously talented teenager from Sporting Lisbon, having impressed the Red Devils’ recruitment staff during a pre-season friendly between the two sides.

It would be during six seasons at Old Trafford that Ronaldo developed into arguably the best player in world football, winning three league titles, the Champions League, two PFA Player of the Year awards and the Ballon d’Or amongst his list of honours.

His progress was gradual during his initial seasons in the Premier League however, scoring four league goals during his maiden campaign and eight before his 20th birthday.

Ronaldo’s development accelerated rapidly soon after though, including scoring 31 league goals to win the division’s Golden Boot in 2007/08 and netting more than a century of goals in all competitions for the club.

He departed in a world-record £80m deal in 2009, later becoming the greatest goalscorer in the history of Real Madrid, the Champions League and the Portuguese national side.

Greenwood joins a long list of illustrious names to have graduated from the club’s academy system, none more successful than Ryan Giggs who became the most decorated player in English football history during a glittering one-club career at Manchester United.

Giggs made his debut for the senior side in the pre-Premier League era as a 17-year-old, later becoming a key figure in a team that became the division’s dominant force under Sir Alex Ferguson.

The former Wales international scored 12 goals in the Premier League whilst still in his teens, forming part of the side that won the title in the competition’s inaugural season and adding a staggering 12 further winners’ medals throughout a career that lasted more than two decades.

No player has ever made more appearances for the club than Giggs’ total of 963 in all competitions, whilst the winger also scored five further league goals for United in the old First Division, before the foundation of the Premier League ahead of the 1992/93 season.

Marcus Rashford burst onto the scene after scoring twice on his senior debut against FC Midtjylland in the Europa League, the youngster handed his chance amid an injury crisis and seizing it with a brilliant performance.

Just days later the forward scored twice on his Premier League debut against Arsenal and from there has largely been a fixture in the Manchester United side.

Rashford finished his first half-season as a regular with five league goals and managed 13 in the league before leaving his teens, the star having been a regular source of goals for the Red Devils in the seasons since.

The England international has 20 goals in all competitions this season and is quickly closing in on a century in club colours, having already made 267 appearances for the Red Devils since his debut as an 18-year-old just over five years ago.

Wayne Rooney became the most expensive teenager in football history when signing for Manchester United from Everton in 2004, the forward having shot to prominence after announcing himself with a first Premier League goal aged just 16.

He starred as an 18-year-old at the European Championship with England that summer to cement his status as a teenage star before making the move to Old Trafford, where he made an immediate impact with a hat-trick on his debut in the Champions League.

Rooney’s first season saw him score 11 league goals to be named as the PFA Young Player of the Year, an accolade he retained the following season following another impressive campaign.

Rooney scored 15 league goals as a teenager for the club, part of an overall haul of 253 in all competitions that saw him eclipse Sir Bobby Charlton as the Red Devils’ record scorer.

He finished his career as the leading scorer of all-time for both club and country, whilst only Alan Shearer scored more than Rooney’s 208 goals in the Premier League.

Greenwood’s goal against Aston Villa saw him move past some stellar names to become Manchester United’s highest-scoring teenager of the Premier League era, a sharp turn beyond Tyrone Mings freeing the space for the forward to net his 16th in the division.

The 19-year-old has won plenty of plaudits for the calibre of his finishing since breaking into the first-team fold, Greenwood deadly off either foot when afforded space to shoot.

Greenwood’s 17 goals in all competitions last season saw him level Rooney, George Best and Brian Kidd for most goals by a Red Devils’ teenager in a single season, whilst he has overcome a difficult start to 2020/21 to register 11 for the season to date in all competitions.

Already capped by England at senior level, Greenwood is a player who could star for club and country for the next decade.