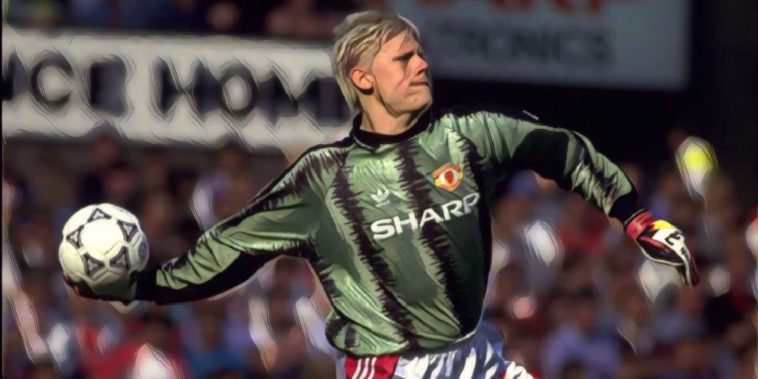 Manchester United’s goalkeeping position has been subject of much discussion this season, with Dean Henderson having replaced the under pressure David de Gea as first choice in recent weeks.

Despite his indifferent recent form De Gea has proven one of the very finest shot-stoppers to have adorned the club’s colours in the Premier League era, a history of goalkeepers that sits all-time greats Peter Schmeichel and Edwin van der Sar alongside the less fondly remembered Mark Bosnich and Massimo Taibi.

We’ve decided to look back at the most successful Manchester United goalkeepers of the modern era, here are the five goalkeepers to have kept the most Premier League clean sheets for the Red Devils:

Amongst a series of post-Schmeichel succession plans that failed to solve a glaring weakness in Sir Alex Ferguson’s sides shortly after the turn of the millennium, Carroll spent four seasons at Old Trafford after signing from Wigan Athletic without really cementing a regular position.

The Northern Ireland international made more than ten league appearances in just one of his four campaigns as a United player, struggling to establish himself amid competition from the likes of Fabien Barthez and Tim Howard.

Carroll’s most notorious moment came with an infamous goalkeeping gaffe against Tottenham in 2005, spilling a speculative half-way line effort from Pedro Mendes over his own goal-line – only to have his blushes spared as some incompetent refereeing saw the officials fail to spot the ball had gone in.

He made 49 league appearances and kept 24 clean sheets before joining West Ham on a free transfer, the fifth-highest number of clean sheets amongst United’s Premier League goalkeepers.

Ferguson’s failings in finding a long-term replacement for Schmeichel led to the big-money acquisition of Fabien Barthez in 2000, the France international coming with a big reputation having won the Champions League, World Cup and European Championship amongst his major honours.

Barthez initially began brightly and helped United secure the Premier League title in his debut season, whilst his eccentric style – refusing to obey by traditional goalkeeping stereotypes – endeared him to the Old Trafford faithful.

‘The Divine Bald One’ rarely seemed content with just keeping goal and regularly liked to involve himself in the play, often taunting opposition forwards with daring dribbles and audacious step-overs.

Barthez’s unique style ultimately led to a series of high-profile mistakes, however, and he failed to build on his promising debut campaign despite winning a second league title in 2002/03, the goalkeeper returning to France with former side Marseille having amassed a record of 30 clean sheets in 92 appearances.

After six years of sub-standard showings and spills, United secured the signing of veteran goalkeeper Edwin van der Sar from Fulham in a deal which proved an inspired signing.

The experienced Netherlands international established himself as one of the best goalkeepers in Premier League history during a six-season stint as the Red Devils’ number one, winning four league titles and helping the club to Champions League success in 2008.

Van der Sar averaged almost a clean sheet every other game as he kept 90 shut-outs in 186 appearances, including setting a new record of 14 consecutive clean sheets during an incredible run during the 2008/09 campaign.

The £2m capture of a 35-year-old goalkeeper raised eyebrows but Van der Sar proved a brilliant servant to the club, bringing an air of authority to the backline to be remembered as an Old Trafford favourite.

Regarded by many as the greatest goalkeeper in the history of the Premier League and one of the best of all-time, Peter Schmeichel arrived at Manchester United as a relative unknown before leaving as one of the key figure’s in the club’s history.

The Dane’s £500,000 arrival from Brondy ranks amongst Ferguson’s finest signings with the formidable presence of the goalkeeper a key factor in the Red Devils’ early dominance of the Premier League era.

Schmeichel spent seven seasons thwarting opposition forwards in the colours of United, his signature ‘star-jump save’ now commonly used amongst ‘keepers in the modern game.

David de Gea’s reputation may have been dented by his downfall of late, but no Manchester United goalkeeper has ever kept more Premier League clean sheets than the Spain international.

De Gea overcame a difficult start to life in English football to establish himself as one of the best goalkeepers in world football, his lightening reactions seeing him often single-handedly win points for his side.

The 30-year-old’s moved past the legendary Schemeichel for clean sheets on the final day of the 2019/20 season, De Gea having kept 122 clean sheets in his 337 league appearances for the club since signing from Atletico Madrid.

That decade spell has also seen the goalkeeper win the club’s Player of the Season accolade a record four times, whilst being named in the PFA Team of the Year on five occasions, more than any other goalkeeper in Premier League history.