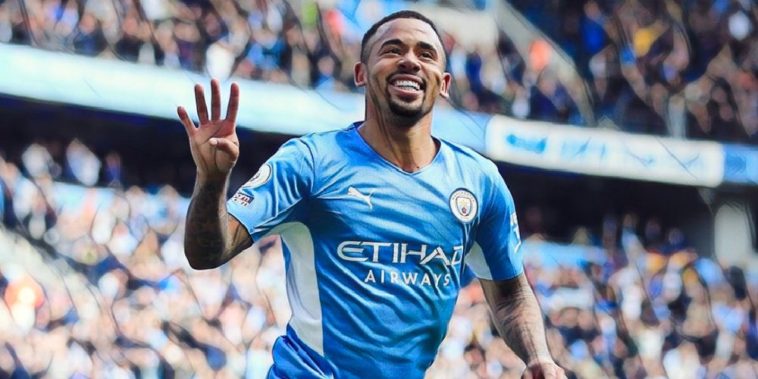 Gabriel Jesus has refused to commit his future to Manchester City amid speculation linking the forward with a move to Arsenal.

Jesus has struggled for regular first-team football at Manchester City this season but underlined his value to the squad with a fine performance against Watford this weekend, scoring four goals and setting up another as the Premier League champions won 5-1 at the Etihad.

The Brazilian has provided 15 goal involvements in just 17 Premier League starts during the current campaign, but has been linked with an exit after a sporadic role under Pep Guardiola with Arsenal believed to be interested.

City are thought to be closing in on the signing of Erling Haaland from Borussia Dortmund and the forward’s arrival would further increase the competition at the Etihad.

Jesus was asked whether he would like to stay and fight for a place if a new forward arrives this summer but refused to discuss his long-term future.

“It’s not time to think about this,” he said according to The Guardian. “You expect me to say this, but it’s true.

“This is no time to think about this. Now is the best moment of the season. I want to enjoy, to keep focused on my team, with my teammates, to fight for the Premier League. I won it with my teammates three times. And I know how that feels and I want to have that feeling again. And then of course we also have the tough game on Tuesday against Real Madrid [in the Champions League] and that is my focus.”

Jesus admitted he would like to start more regularly under Guardiola, but admitted City’s squad is full of talent that would all like a more regular role in the side.

“It’s not just me, it’s [all] the players. If you ask, everyone’s going to say ‘I want to play’ and the season that I arrived here I played a lot, I think.

“I know what I expect of course but I know we have very good players who can play every game as well and sometimes it’s not just me, it’s Riyad [Mahrez], sometimes Raz [Sterling], and [Jack] Grealish arrives this season and sees how it is here. We have a lot of good strikers, wingers and forwards.”

The 25-year-old has featured predominantly from a position on the right this season and says his qualities are working hard to regain possession and attack quickly in advanced areas.

“A street player,” the Brazilian said on his style and best position. “Like you go there and play up front, run everywhere and then try to fight to regain the ball to attack, to do the actions quickly. I think this is my quality.”