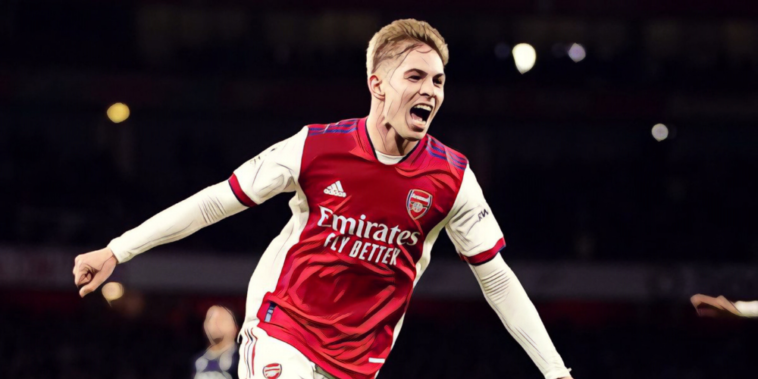 Gareth Southgate’s task of picking an England squad has become ever more scrutinised and difficult in recent times, with there now a plethora of home-grown talent shining brightly on the Premier League stage.

While the season may still be in its early days, there have already been a number of standout English performers, with the Three Lions boss facing the unenviable task of having to decide between the growing list of talent at his disposal.

Here’s a look at the five Englishman to have made the most goal contributions in the top-flight so far this season, with some of the names below perhaps a tad unfortunate not to have earned an international call-up this month.

One man still waiting for his first taste of international football is Jarrod Bowen, with the West Ham winger overlooked for the upcoming World Cup qualifiers, despite his impressive form in recent seasons at the London Stadium.

The Three Lions’ current wealth of attacking options has hindered the 24-year-old’s hopes of inclusion, though on current form he no doubt deserves a look in, having bettered the likes of Phil Foden, Bukayo Saka and Jack Grealish for goal contributions in the early weeks of the season.

The former Hull City man has netted twice and registered four assists in the Premier League so far this term, including two assists in the recent enthralling 3-2 win over Liverpool, which saw the Hammers move ahead of the Merseysiders into third place.

Jarrod Bowen has now provided more assists than any other West Ham player in the Premier League this season (4). 💪 pic.twitter.com/0dW4ChmKmV

That haul included a mazy run and a brilliant threaded pass for Pablo Fornals to make it 2-1, before the forward whipped in a fizzing corner to tee up summer signing Kurt Zouma to head home just minutes later.

Such a display only served to emphasise Bowen’s importance to David Moyes’ side, having made the transition from the Championship to the top tier with remarkable ease, netting 11 Premier League goals since his move to east London in January 2020.

That included eight league goals last season as West Ham narrowly missed out on a top-four spot at the end of a sensational campaign, with the current season already shaping up to be even better, following bright starts in both the Carabao Cup and the Europa League, as well as in the league.

Unlike the man above, Emile Smith Rowe did earn inclusion in Southgate’s squad for the first time this week, albeit belatedly, having been a late call-up after both Marcus Rashford and Mason Mount pulled out of the squad.

While the 21-year-old had been a surprise omission to begin with, it is testament to his form that he did eventually receive the nod from the England boss, edging out the likes of Jesse Lingard and Jadon Sancho who have suffered for their lack of game time at Manchester United.

Things appear to be on the up at the Emirates at present, with Arsenal currently fifth in the table amid a strong run of form of late, with the Gunners enjoying a ten-game unbeaten run in all competitions.

Having previously been rock bottom of the table at the end of August, the key catalyst behind their recent resurgence has been Smith Rowe, with the playmaker having made the joint-most goal contributions (6) – alongside Bowen – by an Englishman in the Premier League since the start of September.

That tally includes three goals in his last three league games, including what proved to be the winner in the recent 1-0 win at home to Watford, with the youngster now an integral part of the first-team three years on from his initial debut.

He has no doubt had to bide his time, enduring frustrating spells out on loan at Huddersfield Town and RB Leipzig, although he has now become a mainstay of Mikel Arteta’s side, having been thrust into the action in the Boxing Day win over Chelsea last season. He hasn’t looked back since.

Like Bowen, another player who can count themselves unlucky not to have earned a senior call-up is Conor Gallagher, with the 21-year-old currently enjoying a real purple patch in his new surroundings at Selhurst Park.

The all-action midfielder enjoyed a positive stint on loan at West Bromwich Albion last season despite their eventual relegation, before shining at Crystal Palace this term with Gallagher having already bettered his goal contribution total from last season.

The Eagles have enjoyed a positive start to the new season under the management of Patrick Vieira, with Gallagher one of the main factors behind that strong opening with four goals and two assists to his name thus far.

That tally includes a brace in a 2-2 draw with West Ham early on in the season, while he also netted a fine finish in the recent 2-0 win over champions Manchester City, before grabbing his fourth goal of the campaign in the victory over Wolves at the weekend.

Reece James is amongst the most in-form players in the Premier League at present, with the Chelsea right-back currently the club’s leading scorer with four goals in all competitions, in addition to providing more goal contributions than anyone else at Stamford Bridge.

In fact, only three players have contributed to more goals in the Premier League so far this season – Jamie Vardy (8), Michail Antonio (9) and Mohamed Salah (16) – a feat made all the more impressive considering he isn’t even a forward player.

The 21-year-old has enjoyed a particularly profitable last few weeks, netting in the 7-0 win over Norwich City, before bagging a brace in the 3-0 victory over Newcastle United at St James’ Park.

Reece James in the Premier League this season:

James fired in two stunning efforts – one from each foot – to showcase his expert ball-striking ability, before supplying an exquisite assist for Kai Havertz in the recent draw with Burnley, with perhaps only Liverpool’s Trent Alexander-Arnold having a better quality of service from full-back.

The problem both men face at international level, however, is the presence of Kyle Walker – who starred at Euro 2020 – with the Manchester City defender one of Southgate’s trusted lieutenants, leaving the England boss seeking a solution to squeeze in his stellar list of right-back talent.

Leading the way for goal contributions this season, however, is one man who won’t be earning an England call-up any time soon, with the now-retired Jamie Vardy in typically lethal form in front of goal for Leicester City.

While the veteran striker would no doubt still be a valued asset at international level, he is perhaps seeing the benefits of his decision to call time on his Three Lions career, with the former Fleetwood Town man still looking remarkably sharp at the age of 34.

Having netted 15 league goals in 2020/21, the striker already looks on course to better that tally with seven in just 11 Premier League games so far this season, his haul coming despite a frustrating start to the campaign for the Foxes.

After once again missing out on Champions League qualification last season, Brendan Rodgers’ side are perhaps suffering something of a hangover, with the FA Cup holders currently in 12th and seven points off the top four.

As for Vardy, however, he has continued his prolific scoring rate in the top-flight, with his total tally now sitting at 125 goals in 256 appearances in the competition, a remarkable feat considering his late emergence into professional football.