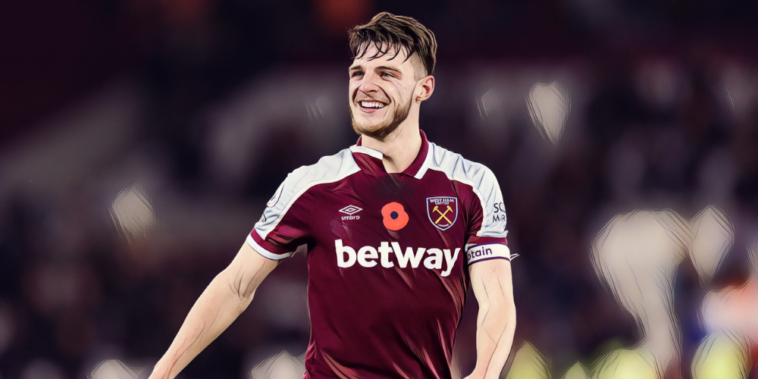 Declan Rice is a footballer in demand with a number of the Premier League’s leading sides monitoring the progress of the West Ham midfielder.

Rice has been a vital part of a West Ham side that has made huge progress under the guidance of David Moyes, securing a top-six finish last season before pushing hard for Champions League qualification in the early stages of the 2021/22 campaign.

The 22-year-old has evolved into one of the most complete holding midfielders in the division and has become an integral figure for club and country, with speculation continuing to surround a potential big-money exit from the London Stadium.

So for those of you interested in top online casino Australia sites, here are the favourites to sign the England international.

Manchester City have been priced at odds of 16/1 to secure the signing of Rice, with the Premier League champions potentially in the market for defensive midfield reinforcements as Fernandinho approaches the end of his Etihad career.

The impressive progress of Rodri has lessened the need for a midfield anchor, but Rice is undoubtedly a player who will appeal to Pep Guardiola given his tactical and positional intelligence.

Rice currently ranks joint-third in the division for interceptions and leads the Premier League for progressive carrying distance, his ability to regain possession and drive his side forward the major factors behind the sizeable interest in his services.

Could there also be potential for City to use Rice at centre-back? The midfielder began his career as a defender and Guardiola has previous for positional changes, including the conversion of Javier Mascherano into a ball-playing defender at Barcelona.

Liverpool are priced alongside City at odds of 16/1 to sign Rice, despite the Reds’ links to the midfielder having been tentative in comparison to their Premier League rivals.

Georginio Wijnaldum’s departure for Paris Saint-Germain last summer left a midfield berth that was not addressed with a new signing, though the presence of Fabinho as the anchor of Jurgen Klopp’s team means there is no clear role for Rice in the side.

The 22-year-old is, of course, capable of operating further forward and his ball-winning ability would prove a valuable asset in Klopp’s counter-pressing system, but it remains to be seen whether Liverpool would spend such a significant sum on Rice remawith other areas perhaps of more pressing concern.

David Moyes last month claimed that the £100m price-tag placed on Rice last summer was a ‘bargain’ no longer available and it would surprise many to see Liverpool – frugal spenders in recent windows – to invest a record-breaking fee on the England midfielder.

Manchester United’s need for midfield reinforcements has been well-documented and there appears few more obvious candidates for the Red Devils than Rice.

The much-maligned ‘McFred’ midfield axis has had more than its fair share of criticism, with the duo of Scott McTominay and Fred having had their limitations exposed during United’s dismal derby defeat to Manchester City on November 6.

Rice is a footballer capable of anchoring the side and providing much-needed presence in the engine room, the West Ham star possessing drive and a prolific ability to regain possession and place his side on the front foot.

The summer signings of Cristiano Ronaldo, Raphael Varane and Jadon Sancho added quality to the Red Devils’ ranks, but without upgrades in midfield the club’s hopes of challenging for the title appear distant at best.

Few would be surprised to see the Red Devils break the bank to prise Rice from the London Stadium, a signing that would instantly improve and bring balance to the side.

Chelsea and Manchester United are the joint-favourites to secure Rice’s signing, with the West Ham midfielder having regularly been linked with a return to Stamford Bridge in recent windows.

Rice began in the academy system at Chelsea before his release as a teenager, crossing the capital to sign for the Hammers and emerging from their ranks as one of English football’s most talented youngsters.

Thomas Tuchel has a wealth of midfield options at present, but with both N’Golo Kante and Jorginho heading into their thirties – and Saul Niguez having struggled during a loan spell from Atletico Madrid – a move for Rice could secure Chelsea’s midfield for the next decade.

Rice would no doubt relish a move to Chelsea and linking up with a whole host of the Blues’ home-grown contingent, the likes of close friend Mason Mount, Reece James and Callum Hudson-Odoi amongst an English core that can remain intact for seasons to come.

Chelsea’s interest in Rice would certainly gain the approval of former captain John Terry, who declared the midfielder as ‘the best in his position in world football’ following West Ham’s weekend win over Liverpool.