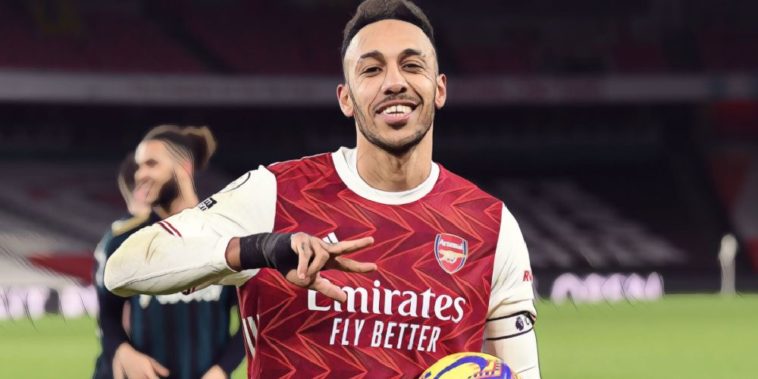 Pierre-Emerick Aubameyang returned to form last weekend after netting a brilliant hat-trick in Arsenal’s win over Leeds, the forward scoring his first-ever Premier League treble as the north London side won 4-2 at the Emirates.

Aubameyang has scored prolifically since signing for Arsenal from Borussia Dortmund and joins a long list of players to score a Premier League hat-trick from the club, the Gabon international the 21st player to claim a match-ball in the division for the Gunners.

Following his feat, we’ve decided to look back at each Arsenal player to net a Premier League treble and rank the club’s hat-trick scorers:

Arsenal fans must have thought they had a future star when Jermaine Pennant scored a hat-trick on his first league start, scoring three times in a 6-0 win over Southampton in a game that saw the winger and Robert Pires become the first teammates to score Premier League trebles in the same game.

Pennant later revealed he had a fair few drinks after attending an FHM party in the early hours before his dream debut, a perhaps symbolic incident in the career of a player who never fulfilled his early potential.

Another star who promised plenty during an ultimately underwhelming period in north London, Arshavin signed for Arsenal in a £15m deal after being the fleet-footed inspiration of an exciting Zenit St Petersburg side that won the 2008 UEFA Cup and the Russian national side who reached the last four of the European championships.

He seemed a player tailor-made for Arsenal with his speed, skill and ability to score goals, though the moments of magic were mixed with inconsistent periods and a talented footballer never truly found his groove as a Gunner.

All except for that one night on Merseyside, Arshavin scoring all four goals in a thrilling 4-4 draw with Liverpool in an electric performance that will live long in the memory.

Kevin Campbell came through the academy system at Arsenal and made 228 appearances in all competitions, but the forward only makes it onto 19th in our rankings of the Gunners’ hat-trick heroes.

However, the presence of Ian Wright restricted his minutes and he departed for Nottingham Forest in 1995.

Emmanuel Adebayor may now be about as popular as a fart in a closed lift to all those of an Arsenal persuasion, but for a short time in the club’s colours, it must be remembered he was very, very good.

The Togolese target-man’s best season saw him plunder 30 goals in all competitions for the Gunners, including becoming the first player in Premier League history to score a hat-trick home and away against the same side (Derby) in the same season.

Ranking in at number 17 is the gorgeous Gallic goalscorer that is Olivier Giroud, a man who became the spearhead of some truly classic Gunners’ goal-scoring moves.

Giroud racked up over a century of goals for the north London side before crossing the capital to sign for Chelsea, where he continues to spend his days convincing a succession of managers that he’s actually a rather fine footballer.

Not quite the second coming of Thierry Henry as first hoped, but a more than useful player for more than a decade.

Two FA Cup wins and 108 goals in 387 appearances is certainly not to be sniffed at, his tally including three top-flight trebles.

Wiltord’s winner at Manchester United to seal the league title in 2001/02 ensured his place in Arsenal folklore, and the Frenchman was a capable member of the club’s supporting cast during a golden era under Arsene Wenger.

He won two league titles and scored 49 goals, including a hat-trick against West Ham during his debut season in north London.

Kanu arrived at Arsenal with a wealth of winners’ medals to his name and would leave with plenty more, the Nigerian forming part of a Gunners’ squad who two league titles in the early 2000s.

The forward produced some truly exhilarating moments including one of the most iconic hat-tricks the Premier League has seen, scoring three times in the final 15 minutes of a London derby with Chelsea to snatch victory from the jaws of defeat at Stamford Bridge.

He was, until Aubameyang’s treble last weekend, Arsenal’s most recent hat-trick scorer in the Premier League after netting three times against Everton in December 2018.

We’re not quite sure what similarities Marc Ovemars saw when he bestowed Ray Parlour with his ‘Romford Pele’ moniker, but it’s one that stuck for a midfielder who enjoyed great success after coming through the club’s youth ranks.

Parlour would run himself into the ground for the cause and developed a handy knack of arriving into the box dangerously, memorably netting a Premier League hat-trick against Newcastle in 2000 and scoring an FA Cup final special against Chelsea in 2002.

A player so irresistibly talented his teammates would instruct him which foot to take set-pieces with, Santi Cazorla’s best years were sadly hindered by a succession of injury problems.

At his best though, the Spaniard was an incredible talent, a wonderfully gifted technician who controlled games with an effortless ease, and his treble against Reading in 2012 sees him included in this exclusive list.

Arsenal’s club captain may have endured a difficult spell this season but he has been nothing short of a superb signing for the north Londoners, netting 62 goals in just 105 league appearances after his weekend treble against Leeds.

Mikel Arteta will hope it’s the start of the Gabon international returning back to his brilliant best, his goalscoring exploits – scoring 22 league goals in each of the past two campaigns – sneaking the 31-year-old into our top 10.

Devastating and dangerous at Arsenal, disappointing and disillusioned at Manchester United.

What really happened to Alexis Sanchez whose fall from grace remains one of the sharpest the Premier League has seen.

Amongst Arsene Wenger’s best buys, Nicolas Anelka was signed for just £500,000 before being sold to Real Madrid in a club-record deal £22.3m deal just over two years later.

In between, there was a domestic double and a PFA Young Player of the Year award, alongside a number of explosive performances from the most exciting teenage talent in the Premier League, including a hat-trick against Leicester in 1999.

Marc Overmars arrived in the Premier League having formed part of Ajax’s iconic side of the nineties, and following a brief adaptation, he lit up English football as Arsenal emerged as contenders for major honours.

Full-backs of that era saw little more than a blur as the blistering speed over Overmars gave the Gunners a lightening threat on the counter-attack, the Dutchman providing the cutting edge to a winning machine under Arsene Wenger including scoring three times against Middlesbrough in a 5-1 win in 1999.

Robin van Persie’s defection to Manchester United is a transfer that still rankles at Arsenal, the club captain departing for a direct rival and inspiring his new side to Premier League title success.

Van Persie was majestic at his best for Arsenal after recovering from a frustrating spell with injuries, including winning a Footballer of the Year double and Golden Boot following a 30-goal campaign in his final season at the Emirates.

The Dutchman would net three hat-tricks for Arsenal, including one as part of a 5-3 win over London rivals, Chelsea.

Plucked from obscurity before becoming a cult hero in north London, Ljungberg starred as a hard-running and goalscoring wide-man in Arsenal’s best teams of the Premier League era.

Ljungberg was brilliant during the club’s domestic double-winning season in 2001/02 to be named as the Premier League Player of the Season, netting 17 goals in all competitions – his sole treble coming as part of a 4-0 win over Sunderland.

Arsenal’s title-winning teams of the early 2000s were sprinkled with stardust and Robert Pires was a player capable of jaw-dropping moments of genius.

After a slow start, he burst into life to become one of the Premier League’s brightest talents, dovetailing superbly with the likes of Thierry Henry and Ashley Cole as one of the division’s first inverted wingers.

The fleet-footed Frenchman brought a Gallic guile to the Gunners’ left flank and scored a succession of superb goals, including a brilliant hat-trick against Southampton in 2003.

Ian Wright’s goalscoring exploits made him – for a few years at least – the greatest goalscorer in Arsenal’s history, netting a repertoire of goals that included 30-yard strikes and tap-ins from inside the six-yard box.

There are few players as popular in the north London side’s list of eternal heroes, Ian ‘Wright Wright Wright’ scoring five Premier League hat-tricks during a phenomenal career with the capital club.

Bergkamp’s brilliance places him second in our rankings of Arsenal’s Premier League hat-trick scorers, though his treble against Leicester remains perhaps the greatest the division has ever witnessed.

Somewhat remarkably, it was the only hat-trick Bergkamp scored in the league for the club, in a career that delivered three league titles and Footballer of the Year double.

The greatest footballer in Arsenal’s history and arguably the best the Premier League has seen, his sensational Premier League career seeing him net eight hat-tricks for the Gunners.

There was never going to be any other name at the top of this list.