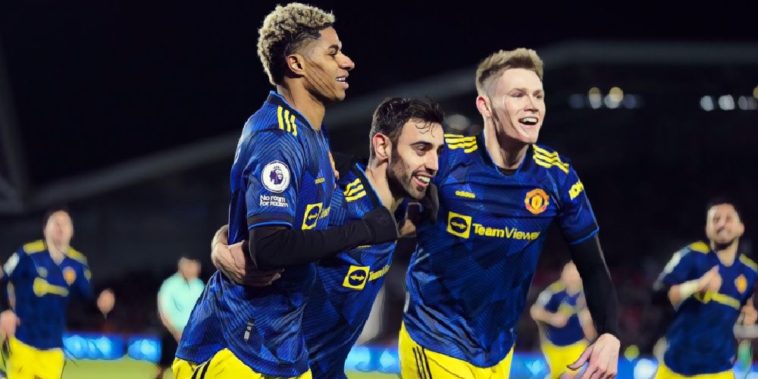 Manchester United got back to winning ways, earning a hard-fought 3-1 win over an energetic Brentford side in West London.

The trip to the Brentford Community Stadium has been a tricky assignment for a number of sides this season, and while it was Manchester United that had more of the ball, it was Brentford that had by far the better of the first half chances, with David de Gea making a number of saves and the defenders in front of him also pulling off a number of crucial blocks.

United – who were too passive in the opening 45 minutes – came out with more intensity in the second half, and went ahead 10 minutes after the restart, Fred curling a ball in behind the Bees’ defence to find the darting run of Anthony Elanga, the teenager taking a touch before nodding the ball beyond Jonas Lossl in what was a smart finish from the Sweden U21 international.

It was two just seven minutes later as United finished off a ruthless attack, Scott McTominay clipping the ball into Cristiano Ronaldo who produced a lovely chested pass to find the driving run of compatriot, Bruno Fernandes. The Portuguese galloped forward into the box, before squaring it to Mason Greenwood who held his run to stay onside before tapping in to double his side’s advantage.

United had squandered a two-goal lead to drop points against Aston Villa at the weekend, though would add a extra layer of comfort to the scoreline with 13 minutes to play. Scott McTominay – who was excellent throughout – battled his way through midfield before laying the ball to Bruno Fernandes. The 27-year-old slipped it into the overlapping run of Marcus Rashford who smartly lashed into the roof of the net.

United have, however, struggled for clean sheets all season, and they would again concede with five minutes to play, a long throw from the Brentford right not being dealt with by the Red Devils defence as Ivan Toney eventually steered home at the back post.

Ralf Rangnick’s side would however hold on to earn a 3-1 win and move to within two points behind fourth placed West Ham, and speaking after the game the German was asked about his half-time message after what had been a lacklustre first-half.

“It was not a strong conversation, but obviously we had to change a few things,” he told BT Sport.

“First half was not good in all aspects of the game. In the second half we were more urgent, attacking higher up the pitch and taking the right decisions in the counter attack and we scored, which is the big difference.

“Anthony Elanga followed up on the performance he showed at Villa Park. He was outstanding in the second half, put in a lot of work against the ball and then scoring the first goal.

“But I am happy for all our young players tonight – three young English goal scorers.”

While United were clinical in the second half, they had David de Gea to thank for two or three fine saves before the break, the Spaniard having been in influential form this season, making the most saves of any goalkeeper in the Premier League to date.

“He’s been doing that the last couple of weeks,” Rangnick said. “Brilliant saves in first half. He is one of the best keepers in the world, I would say.”

Cristiano Ronaldo was absolutely furious as he was replaced before United’s third, with Rangnick bringing on Harry Maguire as he switched to a back three in a bid to make sure of the points. Asked about the veteran’s angry reaction to being brought off, Rangnick said: “That is normal – a striker wants to score – but he has come back from a little injury and it was important to remember we have got another game coming up.

Cristiano Ronaldo was not happy at being withdrawn in the 70th minute with Man Utd 2-0 up against Brentford… pic.twitter.com/gx0uur4GZf

“Also after what happened at Villa Park, we had to defend the lead this time and it was important that we went back to a back five and while we didn’t keep the clean sheet it was important to make sure nothing else happened.”

Next up for United is a game against West Ham on Saturday afternoon, a game that could see them leapfrog the visitors into the top four.