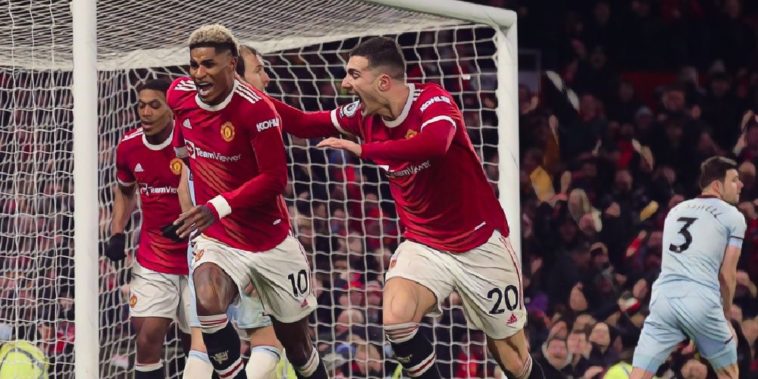 For the second time this season, Manchester United netted a late winner to earn all three points against West Ham.

The two sides came into the game separated by just two points, with Manchester United knowing a win would see them leapfrog the Hammers into the top four places, though Arsenal and Spurs still have games in hand.

United started the brighter and enjoyed plenty of the control that Ralf Rangnick has demanded, though the game was devoid of too many clear-cut chances, with Cristiano Ronaldo’s attempt to reach a sumptuous Bruno Fernandes cross one of the best chances of the first half., while the United number 7 also had a soft shout for a penalty waved away.

Fred would sting the palms of Alphonse Areola in the second half, and Jarrod Bowen rippled the side-netting with an effort, while Raphael Varane and Tomas Soucek both saw their headers from corners go narrowly astray of the target.

However, with the game in the final minute of stoppage time, United snatched all three points as all three second-half substitutes combined. Cristiano Ronaldo poked the ball into Anthony Martial, who in turn slipped it into the path of Edinson Cavani. The Uruguayan timed his run to perfection before squaring it to Marcus Rashford at the back post who had the simplest of tap-ins from three yards to send Old Trafford wild.

Speaking afterwards, Rangnick felt that it was his side’s best defensive performance of his tenure as they restricted to West Ham to minimal chances, though said there was still room for improvement.

“If I look at the shots on goal and the chances during the game, I think we deserved a 1-0 win,” Rangnick said.

100% of Marcus Rashford’s Premier League goals this season have come off the bench:

“For me, it was clear from the very beginning it would take some patience against a well-organised team like West Ham. It was not always easy for us to find the best possible solutions in the final third.

“Defensively I think it was probably the best performance in the last eight weeks, the way that we were always trying to win balls back, our counter-pressing.

“The physicality of the game was really outstanding and we know we still have to improve with possession of the ball.”

While admitting he would much prefer to win by a bigger margin, Rangnick said that a last-minute winner is the best time to score.

“Of course, we would also like to have more games like Brentford at the end when we were 3-0 up,” he said.

“But if you score with the last seconds of the game, the big advantage is there is no time for the team to reply and that was a good one about the goal.”

Matchwinner Rahshord has endured a difficult spell since his delayed start to the season following his return from injury, though having also netted in the 3-1 win over Brentford in midweek, Rangnick hopes the goals provide him with much-needed confidence.

Marcus Rashford has scored more 90th-minute winners in the Premier League than any other Man Utd player in the competition's history:

“He’s one of the top strikers in England,” Rangnick said. “He’s an English international, who regularly played in the Euros and we all know what quality he has.

“He has almost everything a modern striker needs. He’s got the pace, skills, he’s got the size and physicality of a striker and in the end, it’s all about confidence for strikers.

“I’m pretty sure that those two goals have raised the level of confidence within Marcus but now it’s about taking steps, to show that on a regular basis.

“It’s about continuity now and I think he can play a very important role for the rest of the season for us.”