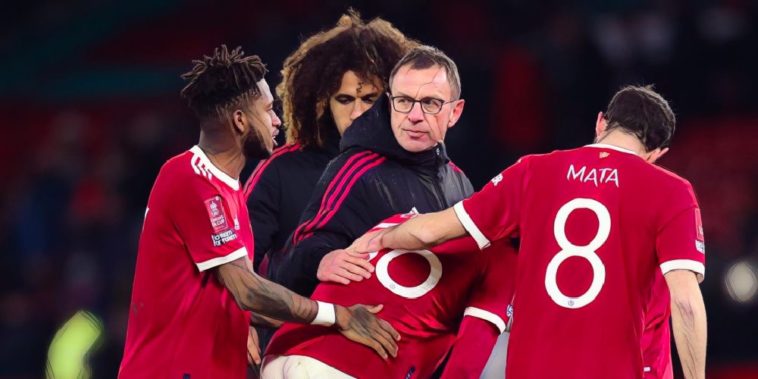 The first fixture of the FA Cup fourth round served up the first upset as Middlesbrough beat Manchester United 8-7 on penalties at Old Trafford.

The Red Devils started brightly and squandered several half chances during the opening exchanges, and looked like dead certs to take the lead on 20 minutes when Cristiano Ronaldo stepped up to take a penalty after the returning Paul Pogba had been taken down in the area.

However, much to everyone’s surprise the Portuguese superstar fired his spot-kick effort wide of the left hand post.

Five minutes later though and Manchester United deservedly took the lead through big-money summer signing, Jadon Sancho. The former Borussia Dortmund man expertly took down a Bruno Fernandes ball over the top, beat his man and fired a left-footed strike into the bottom corner from a tight angle.

However, it just seemed to be one of those nights for United as Ronaldo, Bruno Fernandes and Marcus Rashford all missed hugely presentable opportunities at either side of the break.

Eventually, Chris Wilder’s Boro side would punish the home team for their profligacy in front of goal, though the equaliser would come in controversial circumstances. Duncan Watmore seemed to control the ball with his arm before he knocked it past Dean Henderson for boyhood United fan Matt Crocks to finish from close range.

VAR ruled that Watmore’s handball was accidental, and therefore allowed the goal to stand, with the game going into an additional 30 minutes of play and eventually penalties.

After 15 flawless penalties, Manchester United youngster Anthony Elanga stepped up only to fire his spot-kick over the bar to send 9,000 Boro fans into wild jubilation and their team into the fifth round.

Speaking after the game, United interim boss Ralf Rangnick was stunned that the Championship side’s equaliser was allowed to stand, but said his side were far too wasteful in front of goal.

“How can it be accidental if he controls the ball up in the air with his hand?” he said on Match of the Day. “It was clear it should not stand but in the end I was really surprised it stood.

“In the first half we should have easily been 3-0 up and second half we had chances too. We should have won the game in normal time. On penalties it can happen what happened today.”

The German offered words of support to Sweden U21 international Elanga following his decisive miss in the shoot out.

“We will try to encourage him again, be there for him and it can happen to more experienced players. We could not have had more players to take it, there was Luke Shaw, Phil Jones and the goalkeeper.”

The game saw the return of Paul Pogba to the United side for the first time since November following injury, and Rangnick was seemingly pleased with his performance.

“Paul Pogba played OK, what I expected him to play.”

Next up for the Old Trafford outfit is a trip to face Burnley at Turf Moor on Tuesday night.