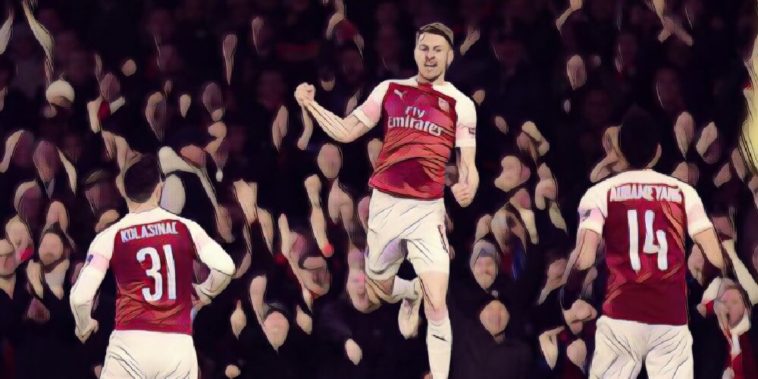 Aaron Ramsey says that Arsenal have a great opportunity of progressing to a second successive Europa League semi-final after beating Napoli 2-0 at the Emirates.

Juventus bound Ramsey opened the scoring for Arsenal on 14 minutes, before Lucas Torreira’s 25th minute strike deflected off Manchester United target Kalidou Koulibaly to make it 2-0 to the hosts.

The result puts Unai Emery’s side firmly in the driving seat ahead of next week’s second leg in Naples, although the Welsh midfielder said he and his teammates were made to suffer against a ‘tough’ Italian side.

“To keep a clean sheet and score a couple of goals is a lovely way to start the first leg. We’re delighted with that,” he told BT Sport.

“We suffered a lot. They’re a good team and keep the ball well. We had to dig in.

“I should have scored in the second half again. We can go into the second leg with a little bit of a cushion. But we know it will be a difficult place to go.

“They were unlucky not to go through [in the Champions League]. They are a quality team. They’re a tough team to play against. We have given ourselves a great opportunity.”