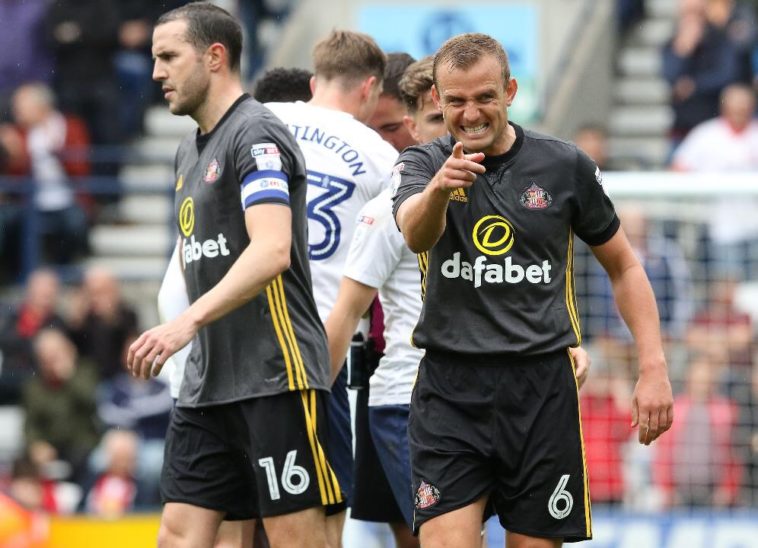 Sunderland travelled to Deepdale for a Championship clash with manager Simon Grayson’s former side Preston North End. The Lilywhites have been in decent form recently, unlike the Wearsiders who only have one league win all season.

Aiden McGeady returned to his former stomping ground, and didn’t get the best of receptions from the home crowd. Callum McManamam was on the bench after picking up a knock at Portman Road midweek. Jonny Williams joined him after returning from illness. Jason Steele retained his place in net despite shipping five to Mick McCarthy’s men on Tuesday. Local lad Jordan Hugill started up front for North End.

Tom Barkhuizen made a clever run to create the first chance of the game but Hugill’s shot was charged down, claims of hand ball against the centre half were waved away.

Sunderland then had their first chance through winger George Honeyman. The corner was cleared to the edge of the area only as far as the Prudhoe born wingman, but his first time volley sailed wide of Maxwell’s goal.

The Black Cats then broke the deadlock through Honeyman. Ty Browning’s deep free kick from halfway found James Vaughan’s head. It was flicked it down to the Californian Gooch; he backheeled it to Honeyman who smashed home.

Later in the first half, a long thrown by makeshift left back Adam Matthews caused chaos. Vaughan headed down for former Preston loanee McGeady who switched onto his better foot and bent a shot just over the woodwork.

The visitors dropped off for a few minutes early on in the second period, this would become costly for Simon Grayson. Josh Harrop, the Manchester United youth academy product hit a free kick from the far side. A deflection took it beyond Steele although he was credited with the goal.

Minutes later North End took the lead. Harrop played the ball into the area along the turf but the Black Cats failed to clear their lines. Former Seaham Red Star striker Hugill was on hand to rifle a volley into the roof of the net. A thunderbolt that no goalie would’ve saved.

However the lead was short lasted. McGeady was played in by Gabon midfielder Ndong. The Glasgow born winger slid in to keep possession before getting up and curling into the bottom left from the edge of the box. McGeady then ran the length of the field to celebrate in front of the home fans who’d been giving him a tough time.

A long ball down the left saw substitute Duncan Watmore chasing. Goalkeeper Chris Maxwell came racing out to the touchline, it appeared that he parried the ball away from Watmore. It was plain to see that he’d handled it outside his area, unfortunately for the 3000 travelling supporters referee Chris Kavanagh somehow managed not to see it. Not only that his linesman failed to spot the blatant handball which would’ve seen an early bath for Maxwell and increased chance of all three points for Sunderland.

Not long from the end Duncan Watmore’s injection of pace crippled the home defence as he strieded through and pulled it back on the byline. Lee Cattermole was on the end of it, the last person some fans would’ve wanted on it as he’s only scored twice in 8 years, this stat would live on. The centre back managed to get a block in and deflect the ball wide of the open goal.

In injury time Watmore again charged forward and was taken out by full back Earl, again the referee Kavanagh sparked controversy by not awarding a spit kick.

A massive improvement from the tonking that Sunderland received off Ipswich but not a top half performance.

Again, I’m not one to b the referee but he is paid to make decisions and he seemed scared to make any big calls. People say refereeing is a hard job but Mr Kavanagh chose to do it and will more than likely get a good wage for it therefore he deserves all the criticism he gets.