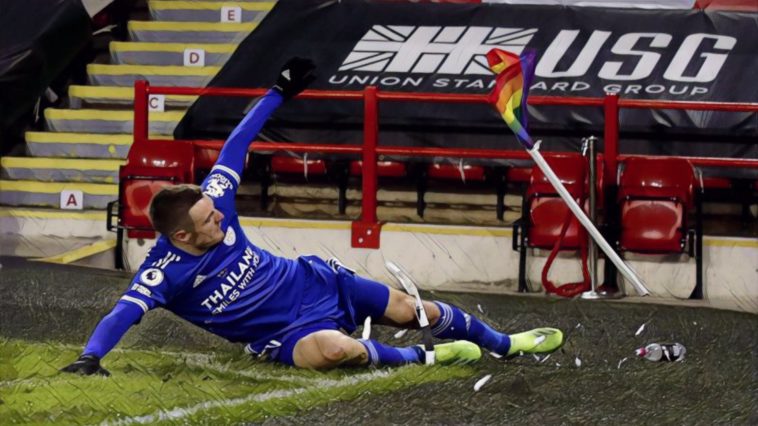 When you score a last minute winner against your most hated team, then the only way to celebrate is by furiously smashing the corner flag into pieces as Leicester City striker Jamie Vardy did on Sunday night.

The optics of smashing a corner flag with the pride rainbow on it probably isn’t the best, but we’ll just put it down to over-exuberance. After all, what a way to win a match.

We often take into account the level of opposition when deciding Player of the Week in this column – hence why Riyad Mahrez’ hat-trick against lowly Burnley wasn’t enough to win it last week – but Wilfried Zaha deserves it despite facing one of the worst teams in the league.

The Crystal Palace winger scored twice against West Brom on Sunday while his shot was responsible for the own goal which opened the scoring. The Baggies, who are second last in the table with just six points from 11 games, were reduced to ten men in the first half, which naturally made it easy pickings for the Eagles.

But Zaha oozed class here, emphasising just how big an impact he has on this Palace team. Having missed the past two games, the South London outfit failed to score in two eminently winnable matches against Burnley and Newcastle United. With him, they never looked in doubt of winning here.

This might have been the most difficult week to pick out the best goals, as there was a plethora of phenomenal strikes across gameweek 11. But the quality of Heung-min Son‘s goal against Arsenal – the technical perfection, the aesthetic aspect of it, the difficulty of the chance – puts it over the top in a very crowded field.

This goal will never get old.

Kalvin Phillips provided a wonderful pass in behind the Chelsea defence to set Patrick Bamford loose against his former club, giving Leeds United the lead on Saturday.

Caoimhín Kelleher made a number of good saves on his Premier League debut against Wolves, but the Corkman’s stopping of Daniel Podence’s effort was the best of the lot.

For the third time in four weeks, Timo Werner is the ‘winner’ of our Miss of the Week. The Chelsea forward missed three good chances against Leeds, but the worst of the lot came from just a yard out from goal. It looked like a great save from Illan Meslier at first, but in reality Werner should have buried it home.

According to The xG Philosophy, the German striker has missed six chances worth more than 0.40 expected goals each this season. His pace and power is giving defences so many problems, and the positions he’s putting himself in are very encouraging, but he really needs to be putting away more of these golden opportunities.

The J Rodriguez Derby is officially a thing.

Conor Coady didn’t so much get pickpocketed by Mo Salah as empty his pockets and let the Egyptian take what he wanted for the opening goal. A rare howler from Wolves’ Liverpudlian centre-back.

As already mentioned, West Brom’s chances of getting anything out of their meeting with Crystal Palace were ended the moment they went down to ten men. The worst part of it is, there was absolutely no need for Matheus Pereira to get sent off. His needless kick out at Patrick van Aanholt was a soft red, for sure, but it was completely idiotic at the same time.

This season is already going to be tough enough for the Baggies, they don’t need their own players making it tougher for them.