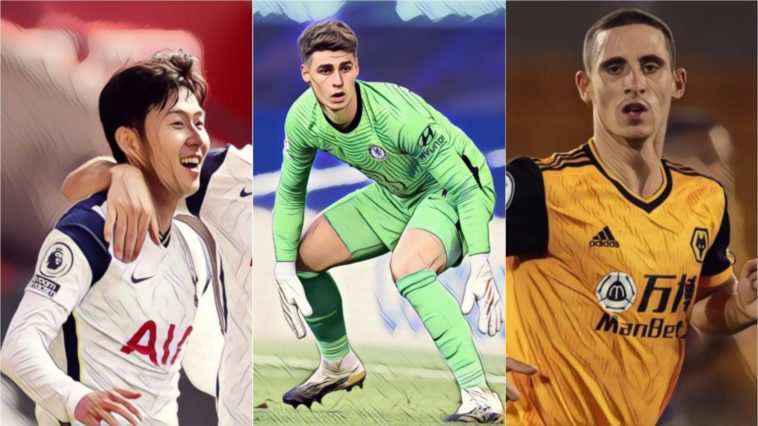 Kevin De Bruyne might be the reigning PFA Player of the Year, but he’ll have to hand over all of his honours and accolades to Daniel Podence after the Portuguese nutmegged him before assisting Raul Jiménez for Wolves’ goal. Those are the rules.

Despite Jose Mourinho’s attempt at humour when saying Harry Kane was the true man of the match on Sunday, Heung-min Son is our player of the week.

Every now and again the Korean absolutely explodes out of nowhere in a match, and this was one of them. On last week’s Fantasy Faithful podcast, I surmised that Son would take advantage of Southampton’s high line, and particularly that of the full-backs, to get opportunities on goal.

It went even better than I expected, as he tore them asunder time and again in this game. The Saints defence were naive in the extreme, but Son did exceptionally well to take advantage of it in the way he did.

It did seem like Calvert-Lewin had sealed it in the first match of the weekend with his hat-trick against West Brom, which moved Carlo Ancelotti to compare him with Filippo Inzaghi – high praise indeed.

Dennis Praet hasn’t been overly impressive in replacing James Maddison since the English midfielder suffered an injury last season, but he came up with a piece of magic against Burnley on Sunday evening. Pick that one out!

Harry Kane could make numerous cases for winning this award after deciding he had had enough being an elite striker and tried his hand at being a number ten. With four assists in this match maybe he’s been played out of position all this time.

However, we’re giving it to Kyle Walker-Peters instead, after the former Spurs full-back hit a wonderful ball over the top and into space for Danny Ings to score the game’s opener. Ings first touch and finish were also brilliant.

Danny Ings is a certified bagsman.

Some ball by Walker-Peters. pic.twitter.com/jIR8T1Eu5K

Premier League team of the week for gameweek two

It wasn’t the strongest of penalties, but Alisson Becker‘s save from the spot is enhanced by the fact that Jorginho had never missed a penalty in the Premier League for Chelsea in five attempts. The Brazilian’s hop technique has bamboozled many a goalkeeper over the years, but his compatriot was equal to it to make his first ever penalty save for the Reds.

Penalty save and clean sheet ✅

We also have to give massive props to Emi Martinez, who kicked off his Aston Villa career in the best way possible – with a penalty stop and a clean sheet. It looks as if this is the move the former Arsenal goalie’s career has been craving for years.

James Milner is the only constant in our lives.

First time James Milner hasn't been in the matchday squads for a Leeds Premier League game since Everton 4-0 Leeds in September 2003. https://t.co/s398kbSDrS

The neverending fall of Kepa Arrizabalaga has been agonisingly interminable and there seems to be no end in sight to his misery. The Chelsea goalkeeper was responsible for Liverpool’s second goal when his pass was closed down by Sadio Mané and turned into the goal.

Brilliant from Sadio Mane, but not one Kepa will want to see again 🙈

Liverpool are now in a commanding position against Chelsea.

It’s gotten to the point where you can’t help but feel sorry for him. The Spaniard arrived as a record-breaking signing but has been easily the worst goalkeeper in the Premier League over the past 18 months. Being replaced by the incoming Edouard Mendy might be a small mercy for the current number one.

When Kieran Gibbs lashed out at James Rodriguez on Saturday afternoon, West Brom losing by just one goal to Everton at half-time. Following his sending off the Baggies went on to get smashed 5-2 by the hosts at Goodison Park. The ex-Arsenal defender sabotaged his own team’s chances earning of precious points and severely let down his teammates in the process.

But what really sealed his crowning as this week’s donkey is what happened immediately after his red card, which we know thanks to a lack of crowd noise and the wonder of pitchside mics. Gibbs could be heard saying “I’ll f*cking do it again”, as if he had just doled out some form of righteous justice when in reality he was just being an idiotic wanker.

Thankfully Seamus Coleman was on hand to put him in his place, telling the centre-back: “No, you won’t do it again. Who you talking to, you’ll do it again? Hard man. F*cking hard man.” And that is why he is Everton’s captain.

Coleman is from rural Donegal, a wind-scarred landscape of mountains & barren landscapes.

He cut his teeth on the blasted heaths of Donegal minor football.

He’d eat a dilettante like Gibbs for breakfast, stuffed between two thick cuts of Brennans sliced pan. With brown sauce.

Incidents like these just make me want to see footballers mic’d up for matches like they are in the NFL even more.

Read: Why the soft treatment of media darling Lampard is unsavoury

See Also: Five Premier League players who had a mare this weekend