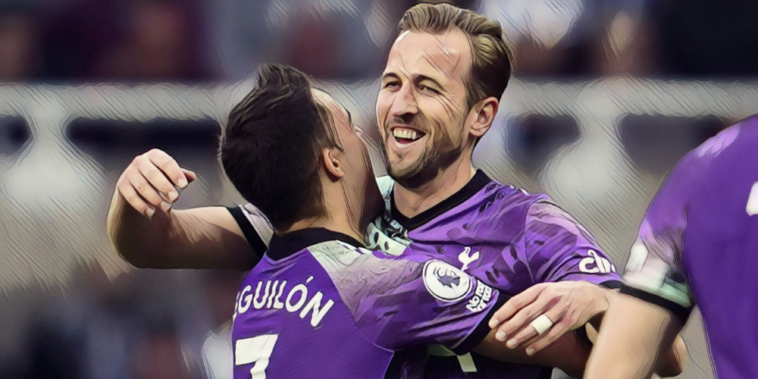 The football world witnessed traumatic scenes during the summer following Christian Eriksen’s collapse for Denmark at Euro 2020, a distressing scenario that demonstrated the importance of the necessary medical services and equipment inside stadia.

Similarly worrying scenes were witnessed at St James Park this weekend, and huge credit must go to Sergio Reguilon and Eric Dier for their actions during Tottenham’s win at Newcastle this weekend, the duo aiding the arrival of urgent medical treatment for a stricken fan amongst the stands.

"I went to the referee and said 'look at this – stop the match'."

Sergio Reguilón explains what happened during the incident during the first-half of #NEWTOT… pic.twitter.com/L9ayEFWuhx

Reguilon’s alerting of the referee to the situation and Dier’s demand for swift action contributed to the stabilisation of the fan at a hospital, their quick-thinking ultimately saving the supporter’s condition from worsening.

It was also fitting that David Ginola was a guest on Sky Sports coverage of the game and the former Tottenham and Newcastle winger spoke eloquently on the matter during the game’s suspension, having himself been resuscitated following a collapse and cardiac arrest during a 2016 charity game.

Sky Sports guest David Ginola talks about the importance of CPR – something which saved his life when he collapsed during a charity game in 2016. pic.twitter.com/vfvYczR7k2

Whilst scenes such as Eriksen’s collapse and the incident this weekend are distressing, the greater spread of awareness for treatment and quick response can only benefit similar situations further down the line.

Bruno Lage’s side had found themselves two goals down with just ten minutes of normal time remaining, only to fightback to earn all three points at Villa Park.

Mohamed Salah might just be the best footballer on the planet right now.

Salah’s scintillating start to the season continued with another sensational showing for Liverpool this weekend, the Egyptian in devastating mood as the Reds thrashed Watford 5-0 at Vicarage Road.

It’s now seven goals and four assists in eight Premier League appearances for the 29-year-old so far this season, with his goal and assist against the Hornets of the very highest order.

Not content with scoring a Goal of the Season contender against Manchester City last time out, Salah repeated the feat with another solo stunner against Watford, leaving three defenders in his wake with some fine footwork before putting Craig Cathcart on his backside and firing home.

A goal that 𝐧𝐞𝐞𝐝𝐬 to be seen from every angle 💫🤩@MoSalah’s display of individual brilliance, presented by @Sonos 🎥 pic.twitter.com/eg2hyPWBHA

Salah’s goal – one which has him leading the race for the Golden Boot alongside Jamie Vardy – was something special, as was his pass for Sadio Mane to open the scoring, an exquisite piece of vision and execution with the outside of his boot.

Salah’s solo effort was one of a number of special goals scored across the division this weekend, with Youri Tielemans’ whipped cross-shot, Tanguy Ndombele’s curled effort, and sweet strikes from Jamie Vardy and Ben Chilwell amongst the finest to have rippled Premier League nets in matchday eight.

However, our Goal of the Week award goes to Mason Greenwood, whose spectacular effort was the highlight of an otherwise disappointing defeat for Manchester United at Leicester.

A superb fourth goal of the season for @MasonGreenwood.#MUFC pic.twitter.com/9tdMVCmTnY

Cutting inside from the right flank, the wonderfully gifted youngster scored his fourth goal of the campaign as he unleashed a swerving effort that gave Kasper Schmeichel no chance.

Norwich remain bottom of the Premier League without a win in eight fixtures this season, the Canaries having scored just two goals since promotion from the Championship.

Daniel Farke’s side secured a spirited goalless draw with a Brighton side that currently sit fourth in the Premier League, but it could have been so much better for Norwich had summer signing Josh Sargent not spurned a guilt-edged opportunity.

Robert Sanchez raced out of the Brighton goal before making a hash of his clearance and colliding with defender Lewis Dunk, allowing the forward to gather the loose ball and head towards the vacant goal.

📸 Josh Sargent failed to get a shot on target in this situation. pic.twitter.com/p7qywhNLtO

The US international – without a league goal this season – produced a tame finish however, a feeble effort which rolled harmlessly towards goal and allowed Shane Duffy to clear.

Norwich will need to be more clinical if they are to have any chance of survival this season.

Harry Kane was back amongst the goals as Tottenham secured a 3-2 win at Newcastle this weekend, scoring his first Premier League goal of the season and sixth in just eight appearances at St James’ Park.

Kane’s goal moved the England captain to 88 away goals scored in the Premier League, the second-most of any player behind only Wayne Rooney (94).

Kane’s haul of 88 goals on the road has come in just 128 appearances in the division, a remarkable statistic when assessed against the leading away scorer’s in the division’s history.

88 – Harry Kane has scored 88 goals in 128 away games in the Premier League, now the outright second-most of any player:

It took Wayne Rooney 243 away games to reach his record tally of 94 strikes, whilst the man Kane overhauled to move second, Alan Shearer, scored his total of 87 away goals in 219 games – a huge 91 more games than the Spurs striker has played in his career to date.

Manchester United’s season is in danger of unraveling after a third league game without a win, losing 4-2 at Leicester as the Foxes scored three times in the closing stages to earn three points.

Ole Gunnar Solskjaer chose to select Harry Maguire in his starting XI, the defender returning to the team against his former side after three weeks out with an injury.

The decision backfired as Maguire looked well off the pace throughout, the centre-back culpable for three goals in a disappointing defeat for the Red Devils at the King Power Stadium.

Maguire was first caught in possession for Leicester’s equaliser, before finding himself as the deepest of the United defenders to play Caglar Soyuncu onside for the Foxes’ second.

The England international could have perhaps done better to close the space as Jamie Vardy netted the third, before woefully losing Patson Daka for Leicester’s fourth in a performance he will be keen to forget.

Watford’s Danny Rose – tormented time and time again by the irrepressible Mohamed Salah – is fortunate to miss out on this dishonourable award.