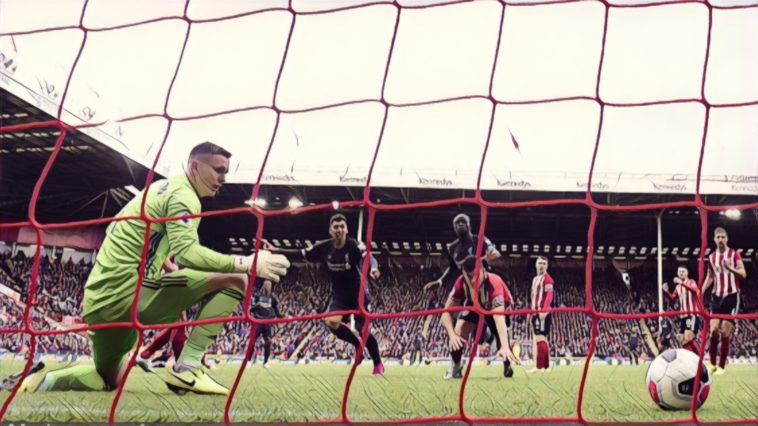 Everton fans showed their solidarity with Moise Kean by hoisting a fan-funded banner that read “No al razzismo”.

The former Juventus forward was on the receiving end of racist abuse in his native Italy last year after scoring against Cagliari.

Manchester City‘s success on Saturday had many fathers, but the standout performance came from Riyad Mahrez.

The Algerian’s splendid free-kick goal aside, he ran the show at Goodison Park on the way to a 3-1 win and was back to the kind of form that won him the Player of the Year award in 2016.

This is why it’s handy having a £60m backup winger in the squad, slotting in without a bother in place of the injured Leroy Sané. If he keeps producing performances like that, it might make it very easy for City to sell their German wide forward in January.

The midfield enforcer isn’t known for scoring stonkers, but after the ball bounced in front of Wilfred Ndidi as he took a touch in the box, he swivelled and swung it towards the far corner.

One day, opposition teams will defend that right channel that Kevin De Bruyne continually finds space in to hit sumptuous assists. That day is not today.

Ilkay Gundogan won’t want to watch this one back.

Miss of the season?

Ilkay Gundogan smashes the bar from THREE yards out!

At what point does Mauricio Pochettino replace Hugo Lloris with Paulo Gazzaniga? The Tottenham Hotspur goalkeeper’s brain short-circuited at the weekend to gift Southampton a goal.

The Frenchman has now made nine errors leading to goals since the start of the 2016/17 season – only Asmir Begovic (10) has made more – not including the howler he made in last year’s World Cup final.

Howler of the Week that wasn’t made by Hugo Lloris

Liverpool got lucky once again, as Dean Henderson laid an egg to hand the Reds a precious win over Sheffield United at Bramall Lane on Saturday.

Serge Aurier deserves to be castigated for his absolute foolishness at the weekend, getting two needless yellow cards in quick succession against the Saints, but there was no bigger donkey than Pep Guardiola.

The City manager defended a racist caricature that Bernardo Silva tweeted out last weekend; the Portuguese posted a picture of teammate Benjamin Mendy as a child alongside a character which appears on popular Spanish chocolates Conguitos with the caption ‘Guess who?’.

Then the Spaniard doubled down on his defence, only making the whole thing worse for himself by unhelpfully pointing out that Mendy and the caricature do in fact look alike. “It looked the same, it happens a thousand, million times with white people … It’s a cartoon and the face is quite similar.”

A pure face-palm moment from Pep, which also put another one of his players in an awkward position. Raheem Sterling – who has been very vocal about racist abuse in the past year – came out in Silva’s defence, but with the manager coming out to bat so hard for him, he was hardly going to contradict his boss.

"I don't think Man City have handled it well"

After City’s 3-1 win over Everton, Victor Anichebe spoke well on the whole debacle, noting that the club should have dealt with it better than they did. Guardiola (and by extension City) has taken a bad situation and made it worse than it needed to be.

Read: How young is too young? The potential risks, dangers and benefits of thrusting teenagers into senior football