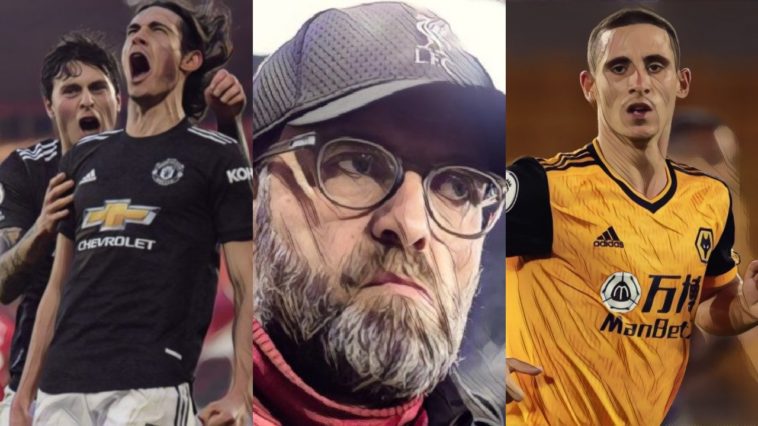 This week’s column features Jurgen Klopp and Des Kelly going at it on live television, Edinson Cavani putting in a masterclass, and Daniel Podence putting Arsenal to the sword.

Whether you were on Jurgen Klopp’s side or Des Kelly’s, their back-and-forth post-match interview on BT Sport was box office stuff.

Klopp made some salient points about kickoff times and the fixture schedule, but Kelly responded with some good points of his own, refusing to be blown down by the Liverpool manager, who was incensed by another injury to his squad.

A fascinating interview between Jurgen Klopp and @TheDesKelly discussing Liverpool's draw with Brighton, the Reds' injuries and fixture schedule. pic.twitter.com/s0BhahlUsP

This was a case of both men having a point while debating it for our entertainment on television, which isn’t what happened when Klopp previously raised the issue in his post-match obligations and Sky Sports cut it out of the live broadcast.

Managers have been complaining about the fixture schedule, particularly the early kickoff on a Saturday, ever since the Premier League was created, but club owners haven’t listened. Perhaps it’s time they did.

Manchester United‘s recent signing only played one half on Sunday, but Edinson Cavani, put in one helluva performance against Southampton. The scoreline was 2-0 to the Saints when he was introduced at the interval and it was 3-2 to the Red Devils by the end.

At 33-years-old the Uruguayan doesn’t have the legs in him to play 90 minutes week in week out anymore, but his movement is still as intelligent as ever. After laying on an assist for Bruno Fernandes, he made two goals for himself with his runs in the box, heading home to complete a terrific turnaround for United.

The prize for silkiest touch and finish this week goes to Daniel Podence, whose wonderful goal ensured Wolves left North London with all three points from a 2-1 win over Arsenal.

Man United arguably should have had more than one goal in the first half at St. Mary’s, but a combination of profligate finishing and great shot stopping from Alex McCarthy kept them scoreless by the break.

The Southampton made a particularly brilliant double save in the opening 45, stopping Mason Greenwood before denying Fernandes from close range.

Southampton keeper has his pass out the back cut out by Greenwood but the keeper saves the first shot.

THEN the keeper gets up and saves Bruno on the second attempt.

Is Pep Guardiola’s contract extension really something to be celebrated?

When you’re one-v-one with the goalkeeper, you have to make them work, but Aaron Connolly failed to apply that golden rule on Saturday against Liverpool. The Brighton striker was slipped through beautifully by Neal Maupay with a pass in behind the defence, but he shot wide of the goal.

He’s only young, but you have to be hitting the target at the very least with opportunities like that.

Controversy of the Week

If there is one decision this season that shows the folly of Video Assistant Referees in its current guise, it the offside decision against Ollie Watkins during Aston Villa’s 2-1 defeat to West Ham United at the London Stadium.

The Villa striker’s arm was deemed offside by a hair’s breadth, which feels like a wholly unnecessary part of the body to consider in these decisions, and it’s not even clear the VAR paused the video at the exact moment the ball was hit by Matt Targett.

On top of that, it seems pretty clear that Angelo Ogbonna is fouling Watkins in the process. What we end up with is a goal that would have been fine pre-VAR being disallowed. And is the game any better for it?

Papa Bouba Diop scored three goals in the 2002 World Cup. Only one player has scored more in a single World Cup for an African country: Roger Milla (4) for Cameroon in 1990. No African has got more goals from midfield.

Honourable Mention: Thomas Müller’s “you have to show it on a windy night in Stoke.”

One of the most uncomfortable sights in the Premier League came during the match between Arsenal and Wolves, when David Luiz and Raul Jimenez’ heads collided, causing a shuddering thud that had everyone fearing the worst.

The Mexican striker, it later turned out, had fractured his skull. Thankfully he’s conscious and recovering from surgery, but it so easily could have been worse.

Luiz was the luckier of the two and came away with just a bloodied head, but many are questioning why he wasn’t substituted off immediately. He was instead replaced at half-time.

Arsenal and Mikel Arteta made the wrong call here. If a player’s head is involved in a collision that cause them to bleed profusely, never mind cause the other player a fractured skull, then there shouldn’t be any leeway; they need to be taken off for their safety.

We, of course, don’t know if the defender was concussed in that moment, but we have heard too many stories in sport of athlete’s forgetting entire games or suffering a delayed reaction from such incidents.

The quicker the rules are amended to allow for concussion subs the better.