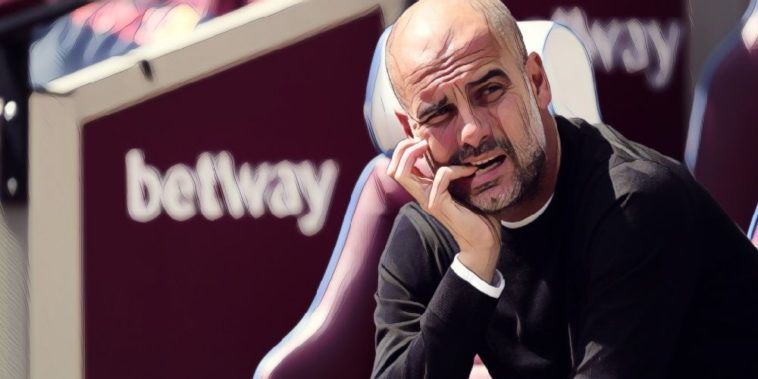 Manchester City’s 5-0 deconstruction of West Ham on the opening day of the 2019/20 season was as comprehensive as the score-line suggests. The home side had no answers to City’s fluid, intelligent movement. They crumbled under the ferocious high press. They chased shadows. To use old-fashioned parlance, it was men against boys throughout.

It is interesting to revisit the media’s response to this game and the language deployed for a contest that raised the curtain to a brand new season, revealing a vista that stretched into the far distance, supposedly full of unknowns.

The victory had been ‘brutal’. Pep Guardiola’s side had been ‘merciless’. The contest had amounted to a ‘strangulation’. The Daily Telegraph went one further, deeming the latest example of City’s slick and unparalleled football to be ‘boring’, even going so far as to equate the ‘5-0 whitewashes’ to the one-nils prevalent at Arsenal under George Graham.

A week before the campaign began – a week before a ball had been kicked – the BBC asked the new Premier League chief executive Richard Masters if he was ‘concerned’ about City’s supremacy.

This collective fear that Manchester City were making the Premier League ‘uncompetitive’ – a charge that was thrown at the club around this time – had risen to hysterical levels after two full seasons of peerless Pep-ball that saw the Blues amass 198 points.

In 2017/18 they scored an astonishing 106 goals romping home 19 points ahead of their nearest rival. Twelve months later they won a clean sweep of domestic honours, becoming the first English side to ever accomplish the feat.

So immense, brilliant, and multifaceted was this City creation that often they would psychologically begin matches with a two-goal head-start. Opponents – and not just relegation fodder but good sides like Manchester United and Everton – would stick ten men behind the ball and desperately hope to emerge with a slender defeat.

Occasionally, a forward would do something dumb like score early and they were able to do so because the chink in City’s armour was an exposed back-line due to their relentless attacking elan. That was a bad move. It only made De Bruyne and co angry.

Sure, we can bring Liverpool into the equation here and rightfully acknowledge that in City’s second season the title scrap went all the way. But let’s stay focused on that West Ham massacre and what the general perception was back then.

The suspicion was that Jurgen Klopp’s men had achieved nigh-on perfection for eight solid months, their performances enhanced by a phenomenal front three with Salah immaculate throughout. They had run the race of their life, losing only once all season. They were incredible, not to mention brutal and merciless.

Yet they had still failed to top Guardiola’s magnificent machine, these incredible, brutal and merciless Reds. What chance then did the rest have? What chance did football have of ever stopping Manchester City?

What nobody could have predicted however back in early August 2019, with City off to an entirely predictable flying start, was that the Hammers game would be one of the last big huff and puffs from the big, bad scary wolf.

Granted, in the 15 months since there have been other remarkable displays, namely a masterly triumph at the Bernabeu, and a trouncing here and there, also too a 4-0 walloping of Liverpool in the league. But these accomplished and commanding performances have now become few and far between. A rarity. A man suffering from amnesia experiencing the occasional bout of lucidity.

Elsewhere, City disappointed last term. They underwhelmed too often and over-all they visibly regressed, toiling to create were so recently it all flowed so effortlessly and beautifully. Something wasn’t quite right. Something was missing. Ultimately, City lost just shy of a quarter of their games and each defeat chipped away at the fear factor. Each defeat drained a little more of the player’s inherent self-belief.

As a Manchester City supporter, I became increasingly perplexed and alarmed at seeing this though beneath the consternation logic reassured me that it would only be a temporary lapse. It was, after all, impossible to expect a group of players to strive and attain other-worldly standards week in, week out, for a third consecutive year, especially after they had been so richly rewarded for doing so previously.

That summer, in hindsight, an overhaul was needed – a refresh – only City inexcusably failed to replace the departing Vincent Kompany and then cruelly they had to endure long-term absences to Aymeric Laporte and their difference-maker Leroy Sane.

So here was a squad jaded, who had proven themselves extraordinary many times over, and now they were weakened also. Of course, they would dip from being brilliant to merely very good. It made sense.

Only the problem is that we are now a quarter of the way through this season and despite making three successful signings in the transfer window and despite the established personnel very much having a point to prove I am seeing precisely no improvement.

City currently lie 13th in the table with a negative goal difference and most worrying of all, the blueprint that used to produce regular magic appears to have a nostalgic sheen to it. It has resided in a drawer in Pep’s office for some time, unused: forgotten.

Where have the overloads gone and the constant seeking of them that used to drag teams out of their shape and out of kilter? Where has the quick, one-touch passing gone that used to facilitate this? Where is the energy and endeavour in midfield that used to crucially protect a back four forever in danger of being isolated? Where are the clinical finishes and clever, incisive one-twos that made them possible? Where is the magnificent, brutal and merciless Manchester City of 2017 to 2019? Can they make themselves known? Do they still exist?

I’m beginning to think not and should that be the case then the contract extension agreed upon by Pep Guardiola last week is as much a cause for unease as it is for celebration.

Because though I still believe the Catalan is the greatest coach in the world he has never before had to rebuild from scratch on his own creation and from the evidence to date it looks like he might be struggling with this particular skill-set. I hope I’m wrong.

My doubts are justified because frankly the metaphorical full-stop that occurred on the final whistle at West Ham in August 2019 was an awfully long time ago now. And just because you have witnessed a miracle once does not mean you can assume another is on its way.