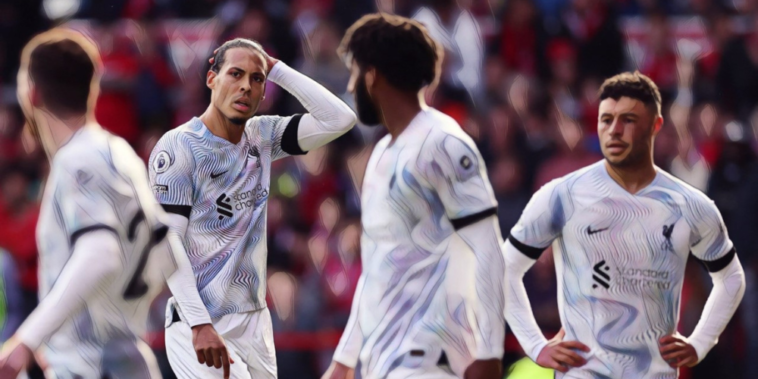 Could Liverpool miss out on the top four?

The longer Liverpool’s slump extends, the greater the questions over whether this is a period or poor form or genuine decline. Back-to-back wins over Manchester City and West Ham had increased confidence, but one step forward has been followed with two steps back after a humbling at Nottingham Forest.

“It feels as low as possible,” Jurgen Klopp said at full-time after a 1-0 defeat at the City Ground. “Massive, massive blow because I have no idea how we can lose this game to be honest.”

Liverpool have lost as many games this season as they did last season 🤯 pic.twitter.com/veSaBtFWy0

Klopp’s team were poor in possession and lacked spark in Thiago Alcantara’s absence, with the reliance on an injury-prone 31-year-old for creativity a major issue in a midfield which represents a glaring weakness. Fabinho’s form is also major concern, and Liverpool lack presence as the Brazilian looks a shadow of his former self. But for the performances of Alisson, the Reds could be even further off the pace in the pursuit of Champions League football.

Before October has ended the title already appears unreachable, while questions are being asked over whether this team can secure a place in the top four. Few would have expected that before a ball had been kicked, but Liverpool continue to look out of sorts as rivals improve around them.

There’s good reason the midfield is dubbed the ‘engine room’, with performance elsewhere dependent on the success of a side’s centre. At present Liverpool’s midfield is malfunctioning and there appears no immediate fix. The task will be remaining in the top four race until the issues can be addressed.

Aston Villa were a team transformed this weekend as the club made a stunning start to life post-Steven Gerrard, a side who had struggled for invention and goals reborn against Brentford.

Villa were bright, vibrant and full of attacking verve, characteristics rarely seen under Gerrard’s tenure with the fans having turned on the now departed head coach following a series of stagnant performances.

Under interim boss Aaron Danks, Villa ran riot. It was 2-0 inside seven minutes and three before a quarter of an hour had been played, with Ollie Watkins adding a fourth to seal an emphatic 4-0 win. Danks made changes and the tactical tweaks paid dividends, as Leon Bailey delighted in a more familiar role off the left and Emiliano Buendia was handed a long-awaited chance as the club’s sole number ten.

The 4-2-3-1 formation saw Watkins rove from the right and Danny Ings lead the line, providing Villa with a four-man forward line capable of interchanging and – crucially – scoring goals. There had been a sense that Villa were vastly underperforming given the talent available and rarely has that been clearer than here.

Pereira has found home at the Cottage

Andreas Pereira’s career had been a stop-start existence until this season, with the midfielder having failed to establish himself at Manchester United with his tenure at Old Trafford punctuated with a number of loans – with mixed success.

Fulham took a chance on the Brazilian during the summer as the west Londoners looked to build a squad of Premier League quality, spending around £10m to sign Pereira.

It has proven a shrewd investment so far this season, with the 26-year-old having made a strong start. Pereira has impressed in a free role between Fulham’s leading talents, tasked with providing invention in pockets of space between the steel of midfield anchor Joao Palhinha and the free-scoring Aleksandar Mitrovic further forward.

His delivery from both open play and set-pieces has proven invaluable and the midfielder took his haul to four assists for the campaign at Leeds this weekend, as he created goals for Mitrovic and Bobby Decordova-Reid. Unable to nail down a regular role at United, he has found a home at Fulham this season.

Chelsea remain undefeated in eight games since Graham Potter’s arrival as manager, but issues remain despite positive signs so far.

The west Londoners were held to a 1-1 draw by Manchester United this weekend, with the conceding of a stoppage-time Casemiro equaliser a sucker-punch at Stamford Bridge. While elements of Potter’s Brighton have been seen so far, there has not been the consistent chance creation that was often associated with a Seagulls side boasting less natural talent.

Creative but wasteful was the theme of that team, but Chelsea – who have scored just once from open play across their last three fixtures – have been unable to replicate that brand of football to date. Chelsea are 12th in the Premier League for xG since Potter’s arrival and given the lack of a prolific goalscorer to make the most of their opportunities, that is a statistic that must improve and fast.

Potter will also want to rid his side of the unwelcome habit of letting leads slip, with top four rivals Tottenham and Manchester United having both come from behind to rescue late draws at Stamford Bridge.

Normal service was resumed this weekend in the Premier League, as Erling Haaland extended his lead at the top of the goalscoring charts.

The Norwegian’s double to down Brighton saw City close the gap on leaders Arsenal, with Haaland back on the scoresheet after a first blank of the campaign at Liverpool last time out.

It’s now 17 league goals for Haaland this season, a figure just three players – Mohamed Salah, Son Heung-min and Cristiano Ronaldo – bettered across the entirety of last season. The ‘race’ for the Golden Boot appears a procession, with the 22-year-old chasing immortality and records.

🤝 The assist
💪 The strength
🤩 The finish

He’s already half way to the Premier League’s all-time record of 34 goals in a season, one shared between Andy Cole and Alan Shearer – each of who completed the feat in a 42-game season.

At his current rate, Haaland will reach that figure after just 22 appearances. It’s been well repeated on these pages during the opening weeks of the season, and will no doubt continue to be as the season progresses, but the numbers are truly extraordinary.