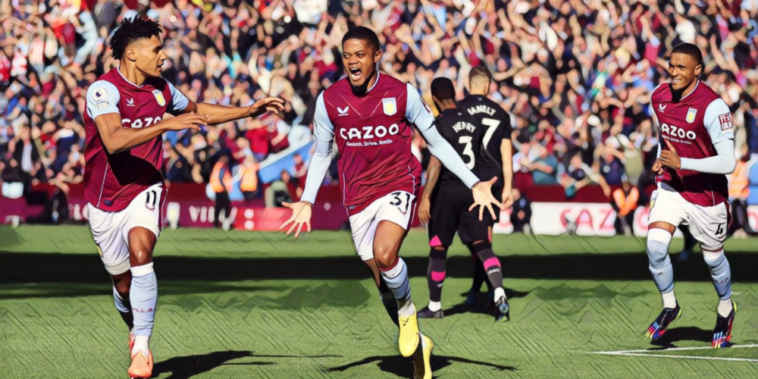 The Premier League weekend kicked off with a huge result at the City Ground, as Nottingham Forest upset to the odds to earn their first win since August against Liverpool.

Jurgen Klopp’s side had appeared to have turned a corner after successive wins against Manchester City and West Ham, but the Reds were flat in a poor performance.

It was a familiar face who did the damage, as Taiwo Awoniyi struck the decisive goal for Forest. The Nigerian was farmed out on loan seven times during his six seasons at Liverpool and never made a senior appearance for the Merseysiders, but came back to haunt his former side this weekend.

Dean Henderson is in amongst the supporters! 😂

Look at the scenes from the City Ground. Incredible. pic.twitter.com/OHXilYodXk

Liverpool struggled to cope with Awoniyi, whose goal sealed a famous win for Forest on an occasion the club’s fans will cherish after more than two decades outside the top division. Steve Cooper will hope confidence can increase around his squad, as Forest look to climb from the bottom of the division.

A special mention goes to Danny Ings, who joined mascot Riley Regan in wearing ear protectors when leaving the Villa Park tunnel this weekend. A fantastic moment of solidarity and empathy from the Aston Villa forward.

The vibrancy and verve of Aston Villa this weekend was everything the side had lacked under Steven Gerrard, who must surely have felt some frustration as his former side thrashed Brentford.

Villa swatted aside the Bees in a rampant first-half performance, racing into a three-goal lead inside 14 minutes with Leon Bailey in devastating mood.

The winger has struggled to find rhythm and consistency since moving to the Premier League, but showcased the best of his electric game during a superb individual performance. He scored the opener with a brilliant effort from a well-worked set-piece, before turning creator for two further goals as Villa ran riot.

Bailey was full of pace, purpose and penetration in the final third, with Mads Roerslev enduring a difficult day up against the Jamaica international. The Holte End – who bellowed out a chorus of ‘Are you watching Stevie G?’ – will want and demand more of this.

Why did Jose Sa even bother?

It’s hard to think of a more redundant dive than Sa’s attempt to keep out this truly thumping thunderbastard from Youri Tielemans, who opened the scoring in Leicester’s 4-0 win at Wolves with one of the strikes of the season so far.

A bouncing ball towards the edge of the area is often an invitation too difficult to turn down, but rarely is the execution as perfect as this. Unstoppable from the Belgian midfielder.

Tielemans’ stunner is a deserved winner of our Goal of the Week accolade, though there was no shortage of great goals this weekend.

Everton’s third against Crystal Palace was particularly pleasing on the eye, as Dwight McNeil and Alex Iwobi combined in fluid fashion.

Dean Henderson came to Nottingham Forest’s rescue this weekend, with the goalkeeper making a string of saves during the club’s 1-0 win over Liverpool.

The best of the lot came in stoppage-time, as he got down brilliantly to keep out Virgil van Dijk’s goal-bounder header and ensure Forest secured a crucial three points.

This save is UNREAL! 🤤

The 92nd minute as Liverpool pile on the pressure, Dean Henderson does this to deny Virgil van Dijk.

Another week, another statistic that emphases the mind-boggling start of Erling Haaland at Manchester City.

The Norwegian plundered another two goals against Brighton to add to his already absurd total, with the City star on a crusade towards Premier League goalscoring records.

He now has 17 goals in the league alone this season, the same amount that Harry Kane managed across the entirety of last season.

It’s October. The clocks haven’t even gone back yet. City still have 27 games left.

Just where he is going to end up is anyone’s guess.

It’s pretty difficult not to like Bruno Guimarães, a man already on his way to iconic status at Newcastle.

What a wholesome interview! Bruno Guimarães on becoming a father for the first time 👶❤️ pic.twitter.com/EYkFFPIqdE

Wolves’ interim coach Steve Davis revealed that his players are forced to watch through re-runs of their performances and mistakes, though Jonny Otto might just be watching his display against Leicester through his fingers.

The Spaniard endured a nightmare performance as Wolves were plunged further into a relegation battle, with the defender at fault for each of the opening two goals at Molineux.

Jonny conceded a needless free-kick in the build-up to Leicester’s opener, before Harvey Barnes bamboozled the full-back for the Foxes’ second in an emphatic 4-0 result. It came as a surprise when the 28-year-old reappeared for the second half, such were his struggles this weekend.