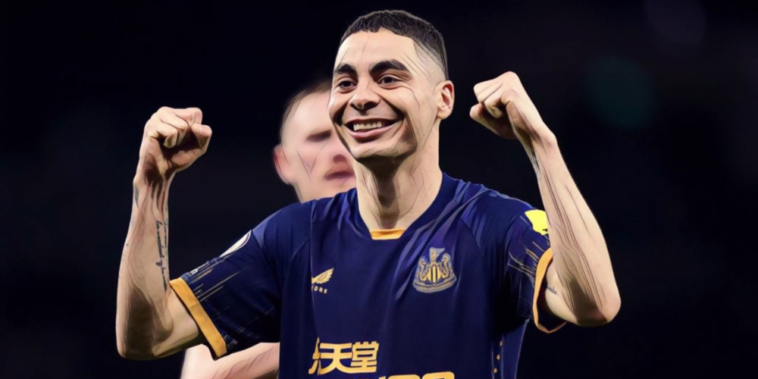 Manchester United left it late to rescue a point at Chelsea, while Newcastle capitalised on that result to move into the Champions League places with an impressive win at Tottenham. Meanwhile, it was a weekend of huge results down at the bottom, with Nottingham Forest upsetting Liverpool and Leicester, Aston Villa and Everton all securing emphatic wins.

Nottingham Forest produced the upset of the weekend to beat Liverpool at the City Ground, with a second successive clean sheet behind the club’s crucial win.

Dean Henderson made a series of saves to frustrate the visitors, who could find no way past the Forest rearguard. The on-loan goalkeeper was in fantastic form to deny Trent Alexander-Arnold and Virgil van Dijk, with his save from the latter a save of the season contender to palm away the defender’s header in stoppage-time.

Made some unbelievable saves. 😮‍💨🧤 pic.twitter.com/VEODMaNLRH

Henderson has been vital to Forest’s upturn in results, having made 14 saves during the past two fixtures with Brighton and Liverpool. He has conceded no goals during that time.

Kieran Trippier departed on the winning side on his first return to Tottenham since leaving in 2019, as Newcastle climbed into the Champions League places with a 2-1 success in north London.

Trippier, as ever, was the creative outlet for his side down the right as he racked up a century of touches and provided a consistent stream of ammunition to the final third.

He led the contest for crosses and passes into the box, while never neglecting his defensive duties with a game-leading 10 duels won and four tackles. Gareth Southgate will be delighted with the form of the 32-year-old, amid concerns over England’s right-back options heading into the World Cup.

Kieran Trippier for Newcastle against Tottenham:

Tarkowski has been a brilliant addition to Everton’s ranks and produced another performance of commitment and character against Palace, crunching into challenges and showing defensive desire in duels both in the air and on the ground.

A reliable leader, his approach to the game has been well appreciated on Merseyside this season with the centre-back leading the division for blocks (25). He also ranks highly among Premier League defenders for clearances (2nd), aerial duels (2nd) and interceptions (3rd) with his free transfer addition having been among Everton’s best business of recent times.

Leicester’s mini-revival continued with a thumping win over Wolves, who were plunged further into relegation trouble after a 4-0 humiliation to their Midlands rivals.

The Foxes have now kept four clean sheets in their past five games, with Wout Faes having been at the centre of their upturn in results. The Belgian defender is aggressive in the challenge and calm under pressure, as he navigated the Wolves press and put Leicester on the front foot with some impressive passes into midfield.

In six games without Faes this season Leicester failed to win or keep a clean sheet. With him, they’ve taken 10 points from the same number of games and had four shut-outs. It’s a stark contrast.

Luke Shaw has risen to the challenge of Tyrell Malacia’s arrival and found his form in recent weeks, with the Manchester United left-back producing another strong performance of ball progression and creativity at Chelsea.

Shaw made nine ball recoveries and four interceptions in a resolute defensive performance, while his creative talents were evident with 16/18 final third passes completed. With the World Cup looming, he has picked a perfect time to make his claim as England’s best left-back.

Crosses of the quality he provided for Casemiro’s equaliser will be well-appreciated in an England team that has struggled for goals of late.

What a ball for Casemiro. 🤩 pic.twitter.com/flsFCokuhv

Casemiro has quickly become irreplaceable to Manchester United, who – for the first time in some time – have an elite anchor in their midfield ranks.

The Brazilian continued his fine form with a dominant showing in the 1-1 draw at Chelsea, one in which he was destructive out of possession and proactive in it. He regained possession on more occasions (10) than any other player on the pitch, while he also led the contest for duels won (9) in an impressive outing.

WHAT A HEADER FROM CASEMIRO 🤯

United now have a midfield to channel attacks through, with Casemiro brilliant defensively and forward-thinking on the ball. He has brought balance and a touch of class to a previous area of concern.

Steve Cooper said Ryan Yates’ performance against Liverpool should be used as an example to the club’s academy prospects, after the local lad delivered an outstanding display in the club’s 1-0 win at the City Ground.

The midfielder set the tone for his side with relentless work-rate and combative challenges, as he paid little attention to the reputation of the visitors. The 24-year-old has had his fair share of critics, but a run of impressive performances are beginning to prove his critics wrong.

If Forest are to survive this season, the club will need players with Yates’ intensity. He hounded Liverpool’s midfield all afternoon in a captain’s performance.

Alex Iwobi is having an outstanding season at Everton and was the heartbeat of the club’s best performance of the campaign to date this weekend.

The Nigerian has been reinvented in a more central role this season and was the Toffees’ most creative outlet during the 3-0 win over Crystal Palace. Full of energy and invention, he created the first goal with a slipped pass into Dominic Calvert-Lewin, before an intelligent back-heel teed up Dwight McNeil following brilliant work from the winger.

Just keeps on getting better. 📈 pic.twitter.com/CbDAHc3Nns

It’s now five assists for the season for Iwobi, who mustered just four across the previous three Premier League campaigns for Everton. Only Kevin De Bruyne (9) has more in the Premier League this season.

Another electric performance from a footballer brimming with confidence at present. Almiron was Newcastle’s match-winner as Eddie Howe’s team continued their strong start to the season with a statement win at Spurs.

It’s now six goals in 12 league appearances for Almiron this season, with the Paraguayan’s goal at Spurs a fine individual effort as he skipped past Clement Lenglet inside the area before firing home.

Almiron’s all-action industry is now coming alongside improved end product, with only Erling Haaland having scored more Premier League goals in October. Jack Grealish might just have unleashed a monster.

What must Steven Gerrard have made of this?

Three days after his sacking, Aston Villa were a team transformed. Rampant inside the opening exchanges, Villa cruised into a three-goal lead inside 14 minutes to set the tone for a 4-0 win over Brentford.

Leon Bailey did the damage early on, opening the scoring from a well-worked set-piece with a finish lashed past David Raya. The Jamaican then set up Danny Ings for the second has he ghosted inside Mads Roerslev with a well-timed run, and was the creator for the fourth as he picked out Ollie Watkins who eventually fired home at the third attempt.

"I'm just really happy that we were able to deliver." 💌 @LeonBailey pic.twitter.com/VeHLhWMw9o

Bailey was a danger all afternoon for the Bees and demonstrated the levels that Villa need to coax out more often.

Two more goals for the inevitable Erling Haaland, who is already on his way to a quite absurd total this season.

Manchester City were not at their best in the win over Brighton, but in Haaland and Kevin De Bruyne boast two of Europe’s finest footballers and the devastating duo proved the difference at the Etihad.

Adam Webster found out first hand how hard it is to stop Haaland, whose raw pace and power proved problematic all afternoon for the Seagulls. It’s 17 league goals already for the Norwegian before the season’s pause for the World Cup. That’s just six less than the Golden Boot-winning figures from last season.