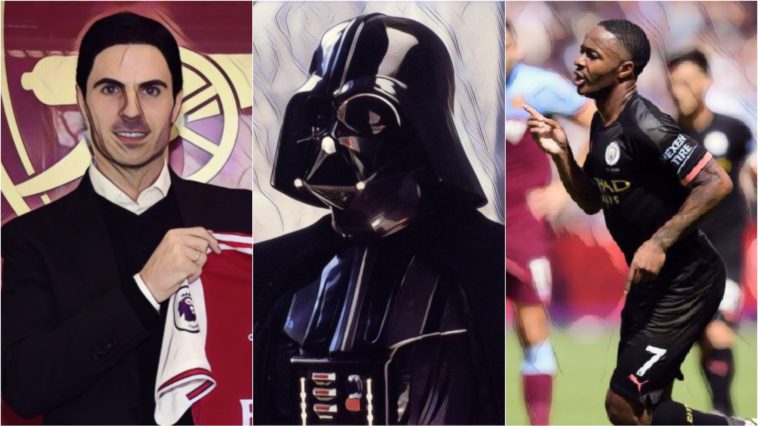 The best and funniest tweets from the world of football this week, featuring Mikel Arteta’s arrival at Arsenal, Erling Haaland in Manchester, Raheem Sterling shows some Christmas spirit, ketchup on pizza, and Darth Vader gives the most foul-mouthed team talk of all-time.

Arteta is here, and he’s not going to take your guff.

In the distant future, when people look back on this incredible Liverpool season, in between all the victories they’ll see they lost 5-0 to Aston Villa and be really confused.

Liverpool fans are getting an insight into what life as an Arsenal fan is like in 2019. Thankfully for them, it is only their U12 side.

Raheem Sterling is a class act.

I thought the whole point of being a professional footballer was that you didn’t have to study for school.

When you’re handed carpet samples and trying to avoid just saying: “I don’t give a fuck, whatever’s the cheapest”

A preview of Liverpool vs Atletico Madrid in the Champions League next February.

Ally McCoist is a national treasure.

"Tactically, she has got it all wrong."

"You CANNOT put ketchup on a pizza!"

Ally McCoist is not happy with events at Easter Road 😂

Cristiano Ronaldo’s leap was fairly good, but not everyone was impressed with it.

Wow, he jumped like the ground was a court summons. https://t.co/5Dj5XSPlvP

Brian Clough is back!

“You can throw all your parliamentary seats in the bin, because you won them all by cheating.” https://t.co/c7xDPdZ92M

A real low point for the Uber Eats Ligue 1.

Goal-line technology will not be operational in tonight's Ligue 1 clash between Nice & Toulouse because rats have eaten through some vital electric cables. (France Bleu)

We need more mashups of football and pop culture references, to be quite honest with you.

"And you can pair up if you like. And you can fucking pick someone else to help you, and you can bring your fucking dinner. Because, by the time I’m finished with you, you’ll fucking need it. Do you fucking hear what I’m saying or not?" https://t.co/q5non54T9M

Read: How every English team has fared in the Club World Cup