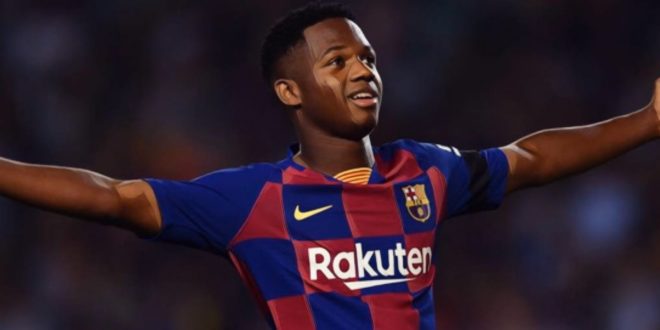 There are a host of young players who are getting us very excited about the next decade in European football.

It can be difficult to predict which footballers are going to be successful from a young age, but we do know this about the five lads we’ve listed – they are bloody good fun to watch.

These are the kind of players who make us want to watch whatever match they’re involved in, who have us glued to the television set every weekend just to see what they are going to do next. And we can’t wait to see what they do over the next few years as they hopefully blossom into superstars.

Five of the most exciting young footballers to watch in Europe:

The most talked-about 19-year-old in world football this season, Erling Haaland is the most exciting teenager to come about since Kylian Mbappe’s outrageous breakthrough season for Monaco in 2016/17.

Those are the two names that look destined to dominate the footballing landscape for the next decade, but it is the Norwegian who is the current flavour of the month, having attracted attention from a host of major clubs in the January transfer window just gone.

That came about because of his ridiculous scoring feats for Salzburg in the Champions League, which earned him a move across the border to Borussia Dortmund, for whom he has been scoring goals at a phenomenal rate. So far he has seven in five Bundesliga games, but only two of them have been starts and he’s only completed the full 90 minutes once – meaning he’s scored at a rate of 2.79 goals per 90.

Dortmund aren’t short for exciting young prospects these days either, possessing the highly impressive Jadon Sancho and Achraf Hakimi, both of whom we could have easily listed here. But it’s the Leeds-born maestro who gets our blood going the fastest.

How Borussia Dortmund recovered from the brink of destruction

Newcastle United may be a dour, defensive, awful team to watch, but they possess one of the most fun players in the Premier League right now – Allan Saint-Maximin.

The wide forward, who arrived from Nice last summer, hasn’t tallied many goals or assists in the league – just the one on both counts – but he regularly gets himself into good positions to score as well as creating chances for others.

But the main thing is, he is a delight to watch in full flow. The Frenchman has a strong Twitter game, but his skills are even better, as he recently showcased against Oxford United in the FA Cup.

Saint-Maximin also scored this thunderbolt of a strike in the same game, using his excellent footwork to put himself into a position to shoot from range. It would be great to see the 22-year-old in a better team where he can really show off what he’s got.

One of the most promising footballers to come onto the Scottish football scene in years, Odsonne Edouard has taken the Premiership by storm since joining permanently from PSG in 2018.

Over the course of three seasons, the French striker has scored 58 goals for Celtic, but that only tells half the story. Edouard always seems to be able to make something happen, no matter the scenario, using his considerable ability on the ball to get out of a tricky situation. Not only does he score all types of goals, but he puts in the hard graft too.

Many are wondering whether he can be as good as his predecessor at Parkhead, Moussa Dembele, but having exceeded his compatriot’s comparative goal total, the focus should be on how quickly he can exceed him.

One of the most talented young players to come through in Serie A in the past two years, Nicolo Zaniolo is an all-action attacking midfielder with splendid ball retention and ball playing skills. The Italian holds no fear when taking the ball into contact or going on a rampaging run. Even if he does go down the odd blind alley, he is a delight to watch.

At 20-years-old, Zaniolo has already played 58 top level games for Roma and tasted Champions League football. His recent cruciate injury was a huge blow to the Italian outfit, who are far better with him in the starting line-up. The question is: can he return to his best after his recovery?

This is the Nicolò Zaniolo we can’t wait to see back on the pitch soon… 💪 pic.twitter.com/lep6rkUnAd

When the season began, no one expected Barcelona would be pinning their attack on a 17-year-old. And yet, following injuries to Luis Suarez and Ousmane Dembele, that is pretty much the situation the club finds themselves in.

Although the Catalan outfit are looking to make an emergency transfer for a new forward, they still have a talented attacker in the form of Ansu Fati. Obviously manager Quique Setien doesn’t want to put all of the burden on his young shoulders, but he has already shown supreme coolness and precision in front of goal for his age, scoring four times in 13 league appearances this season.

Perhaps the most talented player to come through La Masia since Lionel Messi, the Guinea-Bissau native recently illustrated his ability in the cup defeat to Athletic Club, breaking away with a clever flick as three defenders closed in on him.