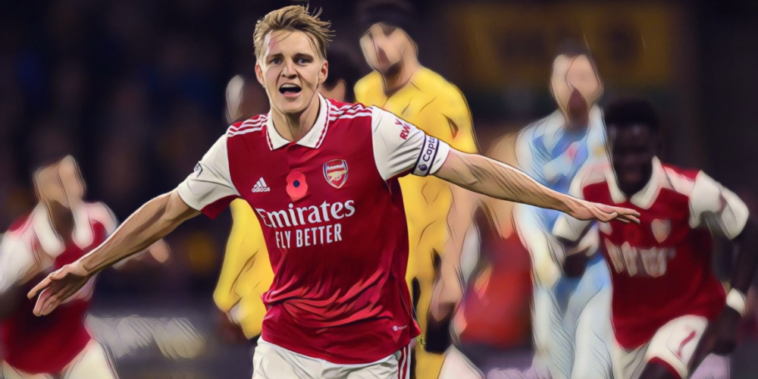 Brentford secured the shock of the weekend with a win at Manchester City, as Ivan Toney sent a statement to Gareth Southgate following his England exclusion. Arsenal took advantage to extend their lead at the top heading into the World Cup break, while Spurs came from behind to win a thriller with Leeds.

Leicester continued their fine form with an impressive win at West Ham, a fourth in five games for Brendan Rodgers and his side.

Danny Ward has epitomised the improvement from the Foxes in recent weeks, with the goalkeeper having bounced back from a difficult start to the season. Ward recorded another shut-out after a number of smart saves at the London Stadium, as he made vital stops from Said Benrahma and Lucas Paqueta.

No goalkeeper has kept more clean sheets in the Premier League this season than Danny Ward (6).

Cementing his spot as the Foxes’ number 1. 🦊 pic.twitter.com/ntazVWnFuN

Ward now has six clean sheets this season, with no goalkeeper in the division boasting more. It’s a remarkable turnaround for Leicester’s number one, who conceded 22 goals in just six games to start the season.

Arsenal extended their lead at the top of the Premier League with a win at Wolves, underlining their credentials as title contenders at Molineux.

Mikel Arteta’s side ground out another three points and clean sheet, with the Gunners possessing the joint-best defensive record in the division this season. Ben White continued his impressive form at right-back and celebrated his England call-up with a performance full of involvement and influence.

At the heart of it all again. 😮‍💨 pic.twitter.com/KSV15LAGvk

The 25-year-old has been excellent at right-back this season and led the contest for touches, total passes, final third passes and possession won. White produced a highlight reel pass over the top to release Gabriel Jesus and his versatility and progressive passing could prove an asset to Gareth Southgate in Qatar.

Brentford produced the result of the weekend with a 2-1 win at Manchester City, with the Bees snatching a late win at the Premier League champions.

Ben Mee was outstanding against his former side and showed great desire to create the opener, as the centre-back powered over Manuel Akanji to head a long ball into the path of Ivan Toney. The centre-back was solid in defence as Thomas Frank’s side dug deep to frustrate the hosts and has proven a bargain signing for Brentford since his free transfer arrival last summer.

Definitely the best result I’ve ever had at that stadium as an away team that’s for sure. 😁💪 pic.twitter.com/eFlcKD2Jfb

His leadership and experience has been invaluable to the Bees’ backline.

Sven Botman shrugged off the disappointment of his World Cup exclusion with a brilliant performance to keep alive Newcastle’s hopes of Champions League qualification.

Botman was excellent in the 1-0 win over Chelsea, as he was 100% successful in his tackles (2/2), ground duels (3/3) and headed clearances (2/2) at St James’ Park. An authoritative presence in the division’s best defence, Botman has already shown this season why Eddie Howe took a patient approach to landing his top defensive target.

He’s been an outstanding addition at Newcastle and one who has helped turn the Magpies into genuine contenders for a European return.

Robertson was back to his best as Liverpool recorded a 3-1 win over Southampton at Anfield, with the Scotland captain given space to roam forward into the final third.

The 28-year-old was a marauding presence down the Liverpool left and provided two assists. He curled in a fantastic free-kick for Roberto Firmino to head home the opener, before Darwin Nunez slid in an inviting cross from Robertson.

Andy Robertson has equalled Leighton Baines as the defender with the most assists in #PL history (53) 🎯#LIVSOU pic.twitter.com/LbQYpWDIYJ

Robertson’s brace of assists means he has now levelled Leighton Baines for the most assists in Premier League history among defenders. He has achieved the feat in 190 games fewer than the former Everton left-back. An incredible creative presence.

Spurs’ record of slow starts continued against Leeds, with Antonio Conte’s team once again required to come from behind to earn a result.

The north Londoners trailed on three occasions, but fought back to edge a 4-3 thriller in the capital. Rodrigo Bentancur has been a driving force of the Spurs side this season and his forward runs contributed to the comeback.

The Uruguayan is developing a welcome habit of scoring crucial goals and netted a late brace to turn defeat into victory. He chested down and rifled in an equaliser with nine minutes remaining, before converting from Dejan Kulusevski’s cut-back for a dramatic winner just moments later.

He has come up clutch on more than one occasion so far this season.

Martin Odegaard pulled the strings as the league leaders extended their advantage at the top of the division, scoring both goals in Arsenal’s 2-0 win over struggling Wolves at Molineux.

The Norwegian orchestrated proceedings with a confident creative class and found himself in the right place to convert Fabio Vieira’s cross for the opening goal. Odegaard scored a second with a crisp finish through a number of bodies to seal the result and improve Arsenal’s cushion at the top of the table.

Gone up a level. 📈 pic.twitter.com/MleVi2bj56

He will be watching from home as the World Cup gets underway this weekend, with the focus on ensuring Arsenal regain their momentum after the break.

Rodrigo Bentancur stole the headlines with a late brace to rescue Spurs this weekend, but it was arguably the contribution of Dejan Kulusevski that was the catalyst for the club’s comeback against Leeds.

How Spurs have missed the Swedish winger, who was a menacing threat all afternoon as he burst past defensive challenges and showcased intelligence and invention in the final third. He led his teammates for penalty area entries via passes (5) and carries (4) against Leeds, with no other Spurs player managing more than one on either metric.

Kulusevski created the winner with a wondrous piece of wing play, as he skipped past Robin Koch to tee up Bentancur. Only Kevin De Bruyne has created more goals than Kulusevski (13) since the turn of the new year and the £45m Spurs invested to sign the 22-year-old and Bentancur from Juventus has proven a steal.

Darwin Nunez continues to grow in stature as a Liverpool player and was on the scoresheet with a double during the Reds’ win over Southampton.

Operating on the left of Liverpool’s front three, the Uruguayan proved a real handful for the visitors as he bullied the Saints’ defence with pace and purposeful running. Nunez took both goals in brilliant fashion, as he first cushioned Harvey Elliott’s clipped pass into the far corner.

The 23-year-old slid in a second from Robertson’s cross and could have had an assist after Mohamed Salah was denied from Nunez’s dangerous ball across the face of goal. He has now averaged a goal involvement every 88 minutes this season and will head to the World Cup in confident mood.

Darwin Nunez is averaging a goal contribution every 88 minutes this season 😳 pic.twitter.com/1oT1p11lsK

Ings was the match-winner as Aston Villa recovered from an early setback to come from behind and win at Brighton.

The forward was sharp in his movement and link-play at the Amex Stadium, while he made it four goals in four league appearances with a brace. Ings slammed home his 100th career league goal from the penalty spot to equalise, before ensuring Unai Emery’s reign began with back-to-back league wins with a second.

Villa have struggled to get their forward line working as a cohesive unit, but there have been encouraging signs since Emery’s arrival.

If Ivan Toney wanted to send a statement to Gareth Southgate, this was it.

Toney was an unfortunate exclusion from England’s World Cup squad, but responded with an outstanding centre-forward performance at the Etihad.

Toney terrorised the Premier League champions on occasion, who could not live with his aerial threat and intelligence as a link-man to get Brentford up the pitch. He scored both goals in the Bees’ 2-1 win, heading home an opener as City failed to deal with a long ball forward, before tapping home to complete a counter in stoppage time.

Callum Wilson’s own form has warranted inclusion in Qatar, but there is an argument that Toney offers the closest all-round game to Harry Kane. Throw in his threat from set-pieces and flawless record from the spot for Brentford and it appears odd that he has been overlooked given Southgate’s style.