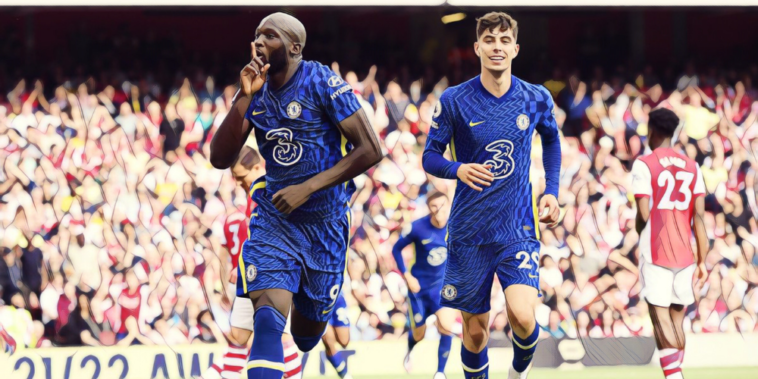 Each week we delve through the Premier League’s weekend action and compile our divisional Team of the Week, with the latest round of fixtures seeing Chelsea secure London derby success take an early lead at the top of the table.

Liverpool, Brighton and Tottenham all maintained their winning starts to the new season, whilst champions Manchester City got their campaign up and running with a 5-0 thrashing of newly-promoted Norwich at the Etihad.

A quick scan of the weekend’s scores and you’d be forgiven for thinking Liverpool’s 2-0 win over Burnley was a routine result, but the Clarets – winners in this fixture last season to end the Reds’ 68-game unbeaten home run – proved awkward opposition across the opening 45 minutes.

Sean Dyche’s side carved out some good opportunities with Alisson in fine form to deny Dwight McNeil and Chris Wood, whilst a late save from Ashley Barnes ensured a second successive clean sheet for the Brazilian.

The 28-year-old was in a commanding mood to deal with the aerial threat of the visitors and with Liverpool‘s leading centre-backs having returned from injury, the Reds have a solid foundation on which to build a title challenge once again.

Excellent throughout as Chelsea secured a 2-0 win at Arsenal to move top of the Premier League, providing a constant outlet down the right-hand side and giving Kieran Tierney a torrid time.

James laid on the opening goal for Romelu Lukaku with a perfect low ball across the penalty area, before sealing the win with an emphatic second as he lashed the ball beyond Bernd Leno.

Alongside his goal and assist the 21-year-old finished the clash with nine crosses, six duels won and four chances created, a complete wing-back performance from one of England’s abundance of options at right-back.

Credit must also go to Trent Alexander-Arnold, whose seven chances created for Liverpool against Burnley – including an assist – was the most created by a Premier League defender across the past six seasons.

Shane Duffy has breathed new life into his Brighton career over the opening fixtures of the season, returning from a testing loan spell at Celtic to step into the void vacated by Ben White’s departure to Arsenal.

The centre-back was commanding in a back three alongside Lewis Dunk and Adam Webster during the 2-0 win over Watford, netting his first goal for Brighton since November 2019 with a thumping header to open the scoring at the Amex Stadium.

Duffy’s skillset may be different to the man he has replaced in Brighton’s centre-back line-up, but the Ireland international has showcased what he can bring with impressive performances to start the season.

Remarkably, only teammate Dunk and Virgil van Dijk have scored more goals than Duffy amongst Premier League centre-backs since the start of the 2018/19 season, despite the defender spending last season in Scotland.

Not quite as comfortable in possession as the recently departed Jannick Vestergaard, but Stephens stood strong as Southampton bounced back from an opening defeat to draw with Manchester United.

The centre-back worked well alongside Mohammed Salisu to repel the visitors, whilst he played a crucial role in the Saints’ goal with a high press that will have left Ralph Hasenhuttl delighted.

Stephens capitalised on hesitation from Bruno Fernandes to rob the midfielder of possession in a dangerous area and tee up Che Adams, whose deflected effort secured Southampton their first point of the season,

Andy Robertson’s return to the substitutes’ bench was a welcome sight for Liverpool this weekend, though the performances of Kostas Tsimikas over the opening two fixtures have shown the Reds have a more the capable deputy.

Tsimikas was excellent during the win over Burnley, with the left-back’s tenacity in regaining possession and marauding runs forward from left-back making the 25-year-old a popular figure amongst the returning crowd at Anfield.

Liverpool’s ‘Greek Scouser’ provided a wonderful cross to assist Diogo Jota for the game’s opening goal and was handed an ovation from the home crowd following his late substitution.

Robertson remains arguably the number one left-back in the Premier League, but Tsimikas could hardly have done more to stake his claim for a regular role during the Scot’s absence.

Brighton have held onto the services of Yves Bissouma throughout the transfer window so far, with the midfielder having attracted interest from some of the Premier League’s leading sides this summer.

Those in need of a midfield presence could do far worse than firm up that interest in the Mali international, who was the best player on the pitch as the Seagulls opened a top-flight season with successive wins for the first time after beating Watford.

Bissouma covered every blade of grass in an all-action performance, with his anticipation and aggression leading to Neil Maupay’s goal following the regaining of possession in a dangerous area.

Confident, combative, and with a poise in possession, Bissouma will be central to Brighton this season if he remains out of the clutches of interested suitors.

But for the obvious optics of Harvey Elliott’s boyish looks, it would have been difficult for any unknowing viewer to pinpoint the full Premier League debutant during Liverpool’s win over Burnley.

Elliott was handed his first start in the division during the Reds’ 2-0 win on Saturday lunchtime, with the teenager producing an impressive performance as the link between the Liverpool midfield and front three.

The 18-year-old rode some robust early challenges as Burnley welcomed Elliott to the rigours of top-flight football, but failed to hide with the midfielder demanding possession from his more senior teammates.

Much has been made of Liverpool’s quiet transfer window, but the return of Elliott from a productive loan spell in the Championship could represent a new signing – if you can excuse the tired cliché.

It’s early days in the reign of Nuno Espirito Santo at Tottenham, but could we be witnessing the renaissance of Dele Alli following a testing period?

The midfielder showed glimpses of his old self during the 1-0 win at Wolves, with a trademark ghosted run into the penalty area seeing the Spurs star brought down inside the box.

The 25-year-old stepped up confidently to send Jose Sa the wrong way from the spot, whilst his defensive work – including some superb defensive blocks – proved crucial to a hard-fought win at Molineux.

Alli has adapted well to an unfamiliar deeper role in the early part of the Nuno era at Spurs, with the Portuguese seemingly getting a tune from a midfielder in need of a career kick-start.

Gabriel Jesus has been linked with an exit from Manchester City this summer, but the forward showcased what he can bring to the Premier League champions with a fine performance against Norwich.

Featuring from the right-hand side of a front three, Jesus was the architect of a five-goal thrashing of the Canaries at the Etihad, creating the first with a driven cross from the right flank before providing assists for both Jack Grealish and Raheem Sterling.

The Brazil international saw a third assist ruled out following consultation with VAR, his performance providing food for thought for Pep Guardiola amongst an abundance of wide options.

The potential arrival of Harry Kane had appeared to indicate Jesus’ days were numbered, but his new-found role on the right could yet to lead to more regular minutes – regardless of whether a new centre-forward arrives before the transfer deadline.

Everton’s minimalist transfer business has proven underwhelming give the vast sums splashed on new signings in recent campaigns, but Demarai Gray’s early performances for the Toffees have been encouraging.

Signed for just £1.7m after a move to Bayer Leverkusen from Leicester failed to work out as hoped, the winger shapes as a potential bargain if he can replicate his performance at Leeds this weekend.

The 25-year-old was electric down the Everton left with his pace and purposeful dribbling threatening throughout at Elland Road, with Gray capping an impressive showing with his first goal for the Toffees.

Chelsea’s record signing wasted little time in making an impression on his second debut for the club, opening the scoring during the Blues’ 2-0 win at Arsenal after just 15 minutes.

It was the perfect start for a player who needed less than 90 minutes to showcase what he will bring to this Chelsea side, with the 28-year-old dominating his battle against Arsenal’s centre-back duo in what proved a huge mismatch.

Pablo Mari struggled for a second successive game for the Gunners as he was bullied by the burly Belgian, whose summer arrival can help transform Chelsea from would-be contenders into potential champions.

Arsenal’s backline will not be the last that struggles to contain Lukaku this season.