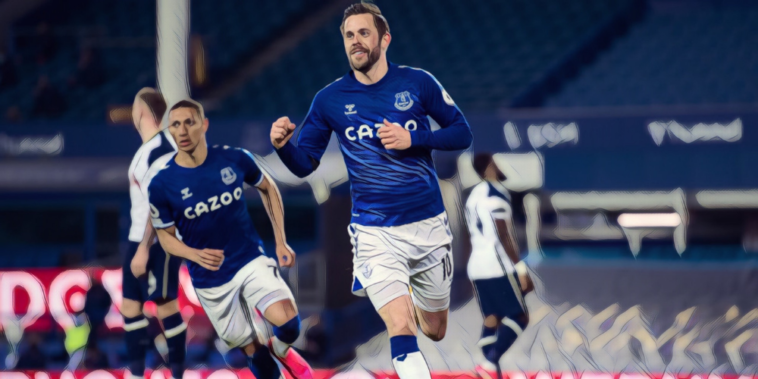 The FA Cup’s semi-finals meant only five Premier League fixtures were played across the weekend, the first of which saw Everton and Tottenham play out an entertaining 2-2 in the race for a top-four finish.

Wolves’ win over Sheffield United saw the Blades’ relegation to the Championship confirmed, whilst Fulham’s hopes of avoiding an instant return to the second tier were dealt a blow after conceding a late equaliser at Arsenal.

Tottenham‘s hopes of qualifying for the Champions League suffered a setback after a 2-2 draw at fellow hopefuls Everton on Friday evening, a result which, in truth, suited neither side as they bid to close the gap to the top four.

The north London side could have returned home on the wrong side of the result, however, had it not been for a strong goalkeeping display from club captain Hugo Lloris.

Lloris saved excellently to deny Richarlison and James Rodriguez in the first half, before another intervention prevented Josh King from scoring his first Everton goal and ensured Jose Mourinho’s side escaped from Merseyside with a point.

It’s been a mixed debut season for Nelson Semedo at Wolves, in a campaign in which Nuno Espirito Santo’s side have failed to reach the heights of the last two seasons.

The Portugal international arrived in a big-money deal from Barcelona and has struggled to showcase his finest form on a consistent basis, though this was an encouraging display as the full-back impressed against Sheffield United.

Semedo was crucial to the defining moment in the 1-0 win over the Blades, making a superb block to deny Enda Stevens before initiating the counter-attack for Willian Jose to score the game’s only goal.

Semedo was an outlet throughout and continued his recent improvement, a right flank of the 27-year-old and Adama Traore a handful for any side in the division.

Fulham’s hopes of a great escape were dealt a cruel blow after conceding a 97th-minute goal to draw at Arsenal, the west Londoner’s defensive display coming agonisingly close to securing an upset at the Emirates.

Joachim Andersen was once again Fulham’s leader at centre-back and marshalled the backline throughout, with bigger clubs likely to be monitoring the on-loan defender closely as Scott Parker’s side edge closer towards the drop.

Andersen has led by example for much of the campaign and could barely contain his disappointment post-match, as time starts to run out for Fulham to climb their way out of the bottom three.

Willy Boly returned to the Wolves side after missing two fixtures through self-isolation and the club are undoubtedly stronger with the towering Ivorian in the starting side.

Nuno Espirito Santo’s side secured a 1-0 win over Sheffield United with their back three helping to ensure the only clean sheet of the Premier League weekend, Boly dominant for large periods and coming close to scoring with an improvised flicked finish.

Newcastle fans have often struggled to identify with the side in recent seasons, but Matt Ritchie remains a player who gives his all to the cause whenever selected.

The wing-back’s return to the side has coincided with an upturn in results as the Magpies have moved away from the relegation places, and the Scotland international showed the quality he can provide when afforded space to deliver from wide against West Ham this weekend.

Ritchie’s corner had earlier been spilled by Lukasz Fabianski to allow Joelinton to put Newcastle 2-0 ahead, before a brilliant ball from the defender was met by Joe Willock to score a dramatic winner after the Hammers had fought back to level.

Carlo Ancelotti’s strengthening of his midfield options has been a large part of Everton’s improvement during his first full season in charge and the return of Allan was evident as the Toffees’ drew 2-2 with Tottenham on Friday.

The summer signing added bite and energy to the club’s midfield options and gave the Spurs midfield little time to settle, finishing the contest with more tackles than any other teammate.

Allan’s presence alongside him also led to a more assured performance from Tom Davies, whilst his determined defensive work provided the perfect screen to allow the likes of Gylfi Sigurdsson and James Rodriguez to flourish further forward.

Sigurdsson netted both goals as Everton drew with Tottenham in a clash between the top four hopefuls, firstly stepping up confidently to send Hugo Lloris the wrong way from the spot, before a wonderful finish from Seamus Coleman’s cross as the ball came across his body.

The Iceland international was central to his side’s best pieces of attacking play as he shared the creative responsibility alongside James Rodriguez, the midfielder also unfortunate not to claim an assist after a brilliant pass into the Colombian.

Gylfi Sigurdsson is the second player this season to score a #PL brace against a side they've previously played for in the league, after Wilfried Zaha in September vs Man Utd#EVETOT pic.twitter.com/zjPRubA1GK

Sigurdsson dropped into spaces between opposition lines throughout as Spurs struggled to contain their former player, who has now provided 10 goal involvements (6G, 4A) in just 18 league starts this season.

Just a matter of weeks ago and Newcastle looked doomed, a thrashing at Brighton leaving the club dangerously close to the bottom three and in the midst of a nightmare run of form.

Allan Saint-Maximin’s impact off the bench sealed all three points at Burnley last time out and the Frenchman was his side’s creative spark once again after returning to the starting side on Saturday.

Saint-Maximin was the best player on the pitch as the Magpies moved a huge step closer to safety by beating West Ham this weekend, the winger electric once more with his speed and skill tormenting the visitors.

It was the 24-year-old’s run that led to Issa Diop’s own goal for Newcastle’s opener and he ran the Hammers ragged for much of the contest, his importance to Steve Bruce underlined in recent weeks.

Newcastle have won 37% of the fixtures Saint-Maximin has been available for this season, a record that drops to just 15% in his absence.

Manchester United‘s bright spark in a much-improved performance from the forward, who threatened throughout as Ole Gunnar Solskjaer’s side beat Burnley 3-1 at Old Trafford.

Rashford was menacing for much of the contest and created several opportunities for his side, including laying on Mason Greenwood’s opener after one signature run from deep down the left.

The 23-year-old has not always found consistency in his performances this season but remains amongst the Red Devils’ most important players when on song, his assist this weekend taking Rashford to 28 goal involvements in all competitions so far this season.

Just where would Spurs be without Harry Kane?

The England captain continued his superb individual season with a clinical brace against Everton on Friday evening, Kane presented with two chances that were taken in ruthless fashion to secure his side a point.

Jose Mourinho will be praying the ankle injury sustained by Kane is not serious ahead of next week’s Carabao Cup final, a chance for the forward to end his long wait for major silverware.

The 27-year-old is a world-class talent and a cut above an average Spurs side at present, the uncertainty surrounding his future only likely to increase as he continues to bail out Mourinho’s mediocrity.

This was more like the version of Mason Greenwood who delighted fans during a brilliant breakthrough last season, scoring twice as Manchester United beat Burnley.

His first was a chance tailor-made for his finishing ability, coming on to Marcus Rashford’s pass to fire home emphatically, before getting a slice of luck on his second as a low strike deflected in off Jack Cork.

Greenwood’s goal extended the Red Devils’ unbeaten run to 12 games and saw him level Wayne Rooney’s record of 15 Premier League goals for the club as a teenager – a record you’d expect him to shatter before his 20th birthday in October.

It’s also now 36 goal involvements in just 57 starts for Manchester United in all competitions, frightening figures for a 19-year-old whose potential appears to have few limits.