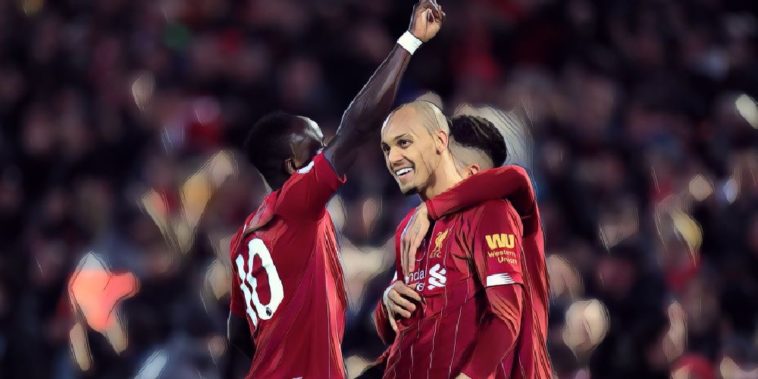 Liverpool took a significant step towards an elusive league title with victory over the champions at Anfield, opening up an eight-point advantage at the top of the division in an enthralling Sunday of Premier League action that also saw Wolves claim the bragging rights in a Midlands derby at Molineux.

Elsewhere, Watford’s long wait for a league victory came to an end at Norwich, their defeated opponents replacing the Hornets at the foot of the division and looking in danger.

It’s back-to-back places in our Team of the Week for the Watford goalkeeper, who followed up last weekend’s impressive performance in defeat to Chelsea with another stand-out showing.

The veteran goalkeeper made five saves to maintain his side’s clean sheet, providing the platform for Watford to secure a first win of the season which lifted them off the bottom of the Premier League.

Part of the league’s best defence and always a threat going forwards, there aren’t many more complete full-backs in the Premier League than the Leicester right-back.

The Portugal international impressed once again in his side’s 2-0 victory over Arsenal at the King Power Stadium, relentlessly getting forward in a win that moved Leicester into second place. Brendan Rodgers’ side have been in brilliant form of late, it is now eight wins in their past 10 fixtures.

Who’s a better right-back than Ricardo Pereira right now? He’s so well rounded I can’t think of one major weakness. Glides past players, always chooses the right pass and is defensively switched on.

Back-to-back goals for the Newcastle defender, who has contributed at both ends of the pitch as Steve Bruce’s side have secured consecutive wins over West Ham and Bournemouth.

The Irishman ghosted into the area to score the winner during his side’s 2-1 win over the Cherries at St James’ Park, impressing since returning to the side in recent weeks and is now remarkably the club’s top scorer.

It’s just one defeat in their past five fixtures for Newcastle, who will hope to continue climbing after the international break.

Sheffield United‘s fine start to the season continues, Chris Wilder’s side having adapted seamlessly to top-flight football and now sit in fifth in the Premier League following their 1-1 draw at Tottenham this weekend.

Central to their success was defender Basham, who impressed in his innovative role as an overlapped centre-back and was the club’s furthest forward player as George Baldock’s cross deflected in.

A vital cog in a well-oiled machine, the Blades continue to thrive at Premier League level.

Kept busy by Bernardo Silva defensively, though the Scotland international was once again amongst key to Liverpool‘s success at both ends of the field.

A constant problem for Manchester City with his relentless running forwards, it was Robertson’s pass that sent Mane racing away in the build-up to Fabinho’s opener, whilst his cross for Mohamed Salah’s goal was pinpoint perfection.

The Liverpool midfielder has had his fair share of plaudits this season and rightly so, and he produced another huge performance to help his side extend their advantage at the top.

The Brazil international provides the defensive screen in front of Liverpool’s back four, and thrived alongside midfield partners Jordan Henderson and Georginio Wijnaldum in shutting down their opposition at Anfield.

He would also open the scoring with a magnificent strike, a key contributor all over the park.

What a start for the Premier League leaders – but Man City are furious!

A player unfairly maligned outside of Anfield, the Liverpool captain led by example in a terrific midfield display against Manchester City.

Tenacious in the tackle and typically industrious, Liverpool’s midfield three provided the platform for a huge win which could have huge implications on the title race.

His cross for Mane’s third goal was brilliant, whilst his combinations with Trent Alexander-Arnold down the right-hand side channel have been a major factor in the club’s recent successes.

What an assist from Jordan Henderson.

Mad to think there’s people out there who still don’t rate him. pic.twitter.com/iCCx7DBYVg

Wolves‘ flying machine was once again at his rampaging best against Aston Villa on Sunday, completing a remarkable 10 take-ons against a Villa defence which simply couldn’t cope with the winger.

A steam-train of a player when in full flight, the 23-year-old won the free-kick that led to Wolves’ opener before providing the assist for Raul Jimenez to score the second.

There have been signs in recent weeks that the former Barcelona youth prospect is beginning to improve his often much-lamented end product, which will be a worrying sight for Premier League defences.

Adama Traoré completed 10 take-ons against Aston Villa, no player has completed more in a Premier League game this season.

The Adama we all love to see. ? pic.twitter.com/jT5xIuqs46

Struggling West Ham will be glad to see the back of the Burnley winger after a disappointing day at Turf Moor.

The 19-year-old was a constant menace down the left-hand side, creating chance after chance for his welcoming teammates during Sean Dyche’s sides impressive 3-0 home win.

Possessing a wand of a left foot, McNeil provided the assist for Chris Wood’s goal with a fine cross, whilst it was his corner that also led to Ashley Barnes’ opener.

Another superb delivery was headed home by Wood only to be flagged for an offside, the Burnley forwards sure to have been pleased with the excellent service provided by the teenager.

Watford are finally beginning to show signs of recovery following a woeful start to the campaign, with the club registering their first win of the season over a Norwich side who are similarly struggling.

Key to their success was Deulofeu, who, when at his best, can provide the creative spark to take the Hornets away from danger. It’s now back-to-back goals for the Spaniard, who opened the scoring at Carrow Road before providing the assist for Andre Gray’s second.

The former Barcelona star is difficult to contain when at his best, and should prove crucial in Watford’s hopes of staying up.

What a start for the bottom club!

Deulofeu robs Buendia in possession and gives Watford the lead within 76 seconds!

It’s proving some season for the Leicester forward, who was once again in the goals as Brendan Rodgers’ side moved up to second in the Premier League table with an impressive 2-0 win over Arsenal at the King Power Stadium.

It was a typical Vardy finish to open the scoring, before the 32-year-old rolled a perfect pass into the path of James Maddison for Leicester’s second.

It’s now 20 goals in just 22 appearances for Vardy since Rodgers was appointed manager in February, and he’s the early leader for a maiden Golden Boot after netting 11 for the season already.

Well-worked build-up and a clinical finish for Leicester