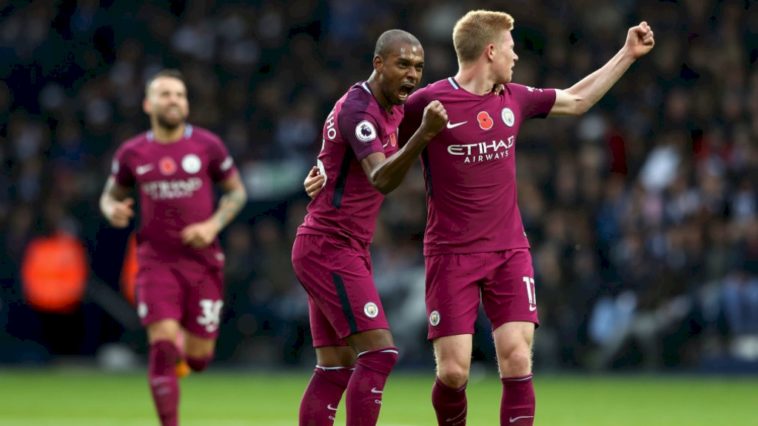 October saw just three Premier League game weeks due to the international break and there was mixed fortune for many of the big hitters. Here’s our team of the month.

There might have only been three Premier League game weeks in October but there was plenty of action. October saw two managerial casualties in Craig Shakespeare and Ronald Koeman meanwhile Manchester City smashed seven past Stoke.

It was an interesting month for Manchester United who kept clean sheets in big games against Spurs and bitter rivals Liverpool. However, they surprisingly fell victim to a tenacious Huddersfield Town.

Meanwhile, Tottenham broke the Wembley curse after they beat Bournemouth 1-0 and Liverpool 4-1. They also ended the month with the equal best defensive record, conceding just two goals. On the other hand, Glen Murray and Leroy Sané were October’s top goal scorers with a tally of three.

So here is our combined Premier League team of the month for October;

Manchester United kept two clean sheets from three games in October against rivals Liverpool and Spurs. He also pulled off an outstanding reflex save to ensure Liverpool were denied all three points.

It was important to ensure Spurs kept a clean sheet against Bournemouth to finally get their first win at Wembley and he was a big part of that. He was also impressive in the 4-1 victory over Liverpool in which he registered an assist.

As with Trippier, Alderweireld was important in Spurs’ vital Wembley win. He was also a big part in ensuring Spurs had the equal best defence in October.

Manchester United kept impressive clean sheets against two of the Premier League’s best attacks in Liverpool and Spurs which he was instrumental in. Had he not have been forced off through injury against Huddersfield it could have been three clean sheets from three.

There were no clean sheets for Arsenal in October but he was impressive throughout the month. The match against Swansea was particularly impressive where he scored the first goal and assisted the other.

Despite only scoring once and assisting once in October he created more chances than anyone else in the Premier League. He also scored the winning goal against Bournemouth.

Manchester City scored an impressive 12 goals in October including 7 against Stoke which de Bruyne was highly involved in. He assisted three of those goals and is arguably the best player in the league at the moment.

An unusually high scoring month for the Brazilian as he notched two goals in three games. He also provided the base and helped launch City’s countless chances.

One of Manchester City’s most important players in October as he scored and assisted in all three games. He also ended the month as equal top goal scorer.

An excellent month for the Brighton man as he finished equal top goal scorer with three goals. Two of which came in an impressive 3-0 dismantling of West Ham.

The league’s top goal scorer continued his good form, netting two goals in October. Whilst he may have missed the Manchester United match, he made up for it with excellent showings against Bournemouth and Liverpool. The latter he scored his two goals against.