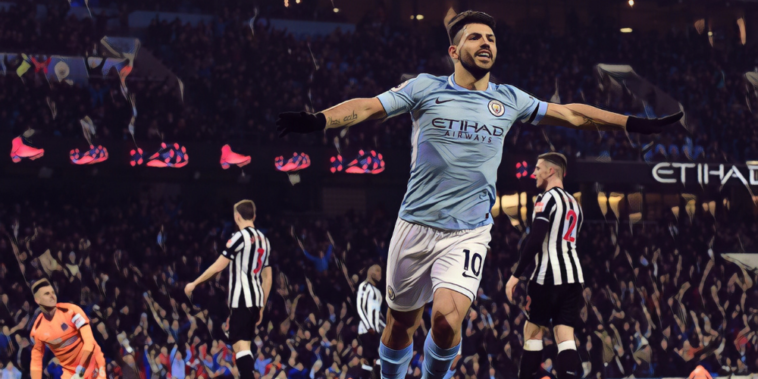 While nothing is a certainty in football, there is at times something seemingly inevitable about a particular player scoring against certain opposition, with some Premier League stars appearing to thrive year after year against the same club.

Strikers, in particular, seem able to develop a knack of consistently haunting the same opponent, whether it be from the start or off the bench, they always manage get themselves on the scoresheet.

Even for those prolific forwards who simply love to score, they always appear to have a favoured opponent or even a favoured away ground where they can continually wreak havoc.

With that in mind, let’s take a look at the Premier League strikers who’ve scored the most goals against a single opponent.

For many, Leicester City are a side hard not to like, with a manager that plays attractive football and an owner who seemingly runs the club in the right way. For Harry Kane, however, it would seem he has made it his mission to cause the Foxes misery, such is his haul of goals against them.

Perhaps he simply holds a personal vendetta against the club, following his failed loan stint under Nigel Pearson back in 2013, while Leicester were in the Championship.

Whatever the case, the statistics don’t lie that the current FA Cup holders are the 27-year-old’s whipping boys, netting his first goal against them back in December 2014.

He fired a hat-trick against them later that season, before netting four in a 6-1 win in the penultimate game of the 2016/17 season, as part of a blistering late surge towards the Golden Boot.

Almost exactly a year later, the Tottenham Hotspur striker added two to his collection on a barnstorming final day clash at Wembley, as the two sides playing out a thrilling 5-4 encounter that eventually swung in the host’s favour.

Kane’s most recent outing against the Foxes saw the England skipper contribute towards the club’s failure to secure a top-four finish, netting a first-half equaliser in a 4-2 final day win at the King Power Stadium as Leicester dropped out of the Champions League places.

It’s likely that Newcastle United fans will be breathing a huge sigh of relief following Sergio Aguero’s exit from the Premier League, such has been his devastating impact against them over the past decade.

The now Barcelona star arrived in England back in 2011 to join Manchester City, helping the club to five Premier League titles across the past decade and becoming their all-time record goalscorer, all while serving as a constant pest for Magpies fans.

His first against the club came just under ten years ago, though his best and most clinical performance against them undoubtedly came in 2015, as the Argentine hit five against Steve McClaren’s winless side at the Etihad.

The hosts had fallen behind early on, yet the forward dragged City level three minutes before the interval, before going on to net four more in the space of just 13 second-half minutes, the game eventually finishing 6-1 with Kevin De Bruyne also getting on the scoresheet amid the flurry of goals.

Two seasons later, Aguero was once again collecting the match ball following another Etihad triumph over the Magpies, this time netting a treble as City ran out 3-1 winners in January 2018.

With injury curtailing his influence in recent seasons, his 15th and last goal against the Magpies came back in January 2019, in what was a shock 2-1 defeat for Pep Guardiola’s side at St. James’ Park.

What is it about Newcastle, eh?

The Premier League’s second-top scorer of all-time, Wayne Rooney often saved his best for the Magpies and scored some iconic goals against Newcastle throughout his career in the division.

His first came as a teenager in a 2-1 win for Everton at Goodison Park, before he bagged a brace in a 3-1 win away from home during his debut campaign at Manchester United.

That same season also saw ‘Wazza’ net one of his greatest goals in the reverse fixture at Old Trafford, the youngster taking his anger out on a dipping ball to fire a fierce volley into the roof of the net.

Notable goals against the north east club also came in the form of a brace in a 5-1 win en route to the title during the 2007/08 season, while he also netted twice more in the 2015/16 season, including a stunning 20-yard strike in an eventual 3-3 draw.

The current Derby County boss scored his last goal against his favoured opposition in his solitary season back at Everton in 2017/18, the ageing forward pouncing on a Karl Darlow error to tap home from just a few yards out.

That love affair with scoring against the Toffees began in the 1992/93 season, as he bagged the second of his four Premier League career hat-tricks in the 5-3 win at Goodison Park, the forward later admitting that the haul was all the more sweet after having received horrific racist abuse from the home crowd.

He scored in both fixtures against Everton during the 1994/95 campaign, before repeating the feat the following season after signing for Newcastle United, the change of clubs not impacting his steady stream of goals against Everton.

Even after another switch, this time to Spurs in 1997, the powerful striker remained a consistent nuisance, scoring both home and away once again in the 1998/99 season, including one in a 4-1 win at White Hart Lane.

Something of a journeyman in his later career, his final strike against the club came for Leicester in the 2003/04 campaign, albeit it proved to be a late consolation as the Foxes lost 3-2.

Ferdinand’s former Newcastle and England teammate, Alan Shearer also enjoyed a fine record against the Toffees, the club proving to be his second most prolific opponent.

The Premier League’s all-time top scorer began life at Southampton, before making the move to Blackburn Rovers just prior to the first Premier League campaign, going on to hit a brace against Everton in a 3-2 defeat during the 1992/93 season.

He hit five more goals for Blackburn against the Merseyside club, four of which came at Ewood Park, before making the move to boyhood club Newcastle in 1996, scoring once in a 4-1 win over Everton during his debut campaign at St James’ Park.

Arguably the best goal of his career would come against the Toffees in 2002/03, the lethal marksmen firing in a wonderful effort on the volley from just outside the box to drag his side level with six minutes to go, before Craig Bellamy snatched a late winner.

Despite his advancing years, Shearer’s best season against Everton came a year later in 2003/04, scoring a brace in a 2-2 draw at Goodison, before repeating the feat in a 4-2 home win in the reverse fixture.

Unsurprisingly for a man who has 260 Premier League goals to his name, Shearer has a second place on this list, the former Three Lions skipper holding the record for the most league goals scored against a single opponent – that opponent being Leeds United.

His stunning record of 20 goals in just 19 league games began back in December 1992 as he netted twice in a 3-1 win, before missing the reverse fixture due to a cruciate knee ligament injury.

Back to full fitness the following season, Shearer netted the first of his 11 top-flight hat-tricks in a 3-3 draw with Leeds at Elland Road in 1993, going on to hit a brace in a 2-1 win at home later that season.

With seven goals in his first three Premier League games against the club, he did somewhat ease off in the years that followed, although notably netted braces home and away in the 1999/2000 season, albeit with neither clinical display earning the three points for his side.

His 20th and final Premier League goal against the Yorkshire side came in a 1-0 home win in 2003/04, with the opposition spared having to face him for the remaining two years of his top tier career as they slipped to relegation to the Championship.

To be fair to Leeds – and Everton – they weren’t the only teams to suffer at the hands – or rather the feet – of Alan Shearer in his 14-year Premier League career, as he also netted 14 against each of Tottenham, Coventry and former club Southampton.