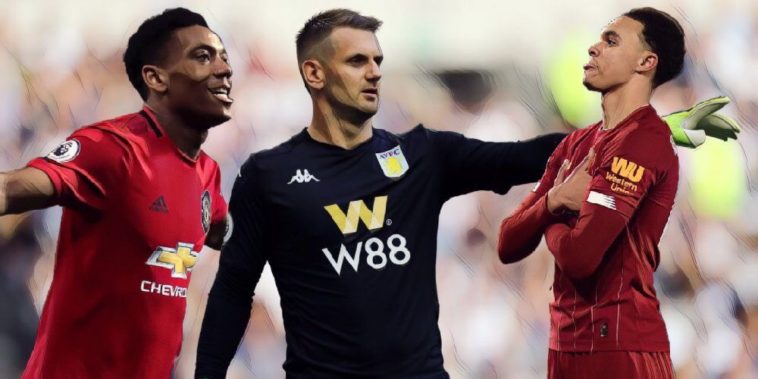 The Premier League’s traditional Boxing Day fixtures failed to disappoint, with a huge victory for leaders Liverpool at Leicester in the clash between the division’s top two.

Elsewhere struggling Aston Villa and Southampton both recorded precious wins, whilst Manchester United finally worked out how to beat a side below them in the table.

Aston Villa opted to bolster their goalkeeping ranks with top-level experience this summer, despite the play-off heroics of Jed Steer in helping to guide the club to promotion last season.

The signing of England international Heaton has proven an inspired one for the club, the veteran bringing a calming presence to the backline and he produced a fine performance in their crucial win over fellow strugglers Norwich.

The 33-year-old former Burnley goalkeeper has not been error free this season, but against the Canaries at Villa Park he was at his best, making five saves to preserve a clean sheet and secure a vital 1-0 victory.

Dean Smith’s side remain in the bottom three but are now just one point from safety, and the club will need their most experienced talents to step up as they battle to avoid the drop in the coming months.

The Liverpool youngster is some talent.

It can be hard to remember that Alexander-Arnold is just 21-years-old, given the experience the full-back has gained in recent seasons, but he continues to shine as a key performer for Jurgen Klopp’s league leaders.

Against Leicester the West Derby-born player was at his sensational best, providing two assists and getting on the scoresheet, whilst also winning the penalty with another wicked delivery from a set-piece.

No player has provided more than Alexander-Arnold’s 20 assists since the start of last season, the England international the playmaker of this formidable Liverpool side and already the finest attacking right-back in world football.

Trent Alexander-Arnold has registered 20 assists in the #PL since start of last season – more than any other player#LEILIV pic.twitter.com/ymMILXkojb

Tyrone Mings’ absence handed an opportunity to Kortney Hause for a huge six-pointer with Norwich on Boxing Day, and the defender impressed at the heart of Dean Smith’s side to help secure a vital victory.

The 24-year-old has had to be patient for his opportunity at Villa Park but stated his case for regular inclusion against the Canaries, his aerial ability standing out and giving Teemu Pukki scraps to feed on.

Hause made nine clearances, three blocks and five tackles in a solid defensive display, the former Wolves player a key figure in a win which lifts struggling Villa ever closer to safety.

Southampton’s hopes of securing Premier League safety have been hugely boosted with back-to-back wins over the festive period, the Saints taking advantage of Chelsea‘s recent wobbles to seal a shock victory at Stamford Bridge on Boxing Day.

The Blues persistence in floating crosses towards Tammy Abraham suited the towering defender perfectly, Stephens marshalling the defence superbly to help earn a victory that lifts Ralph Hasenhuttl’s above the likes of West Ham, Bournemouth and Brighton, three points clear of danger.

Overshadowed by the brilliant performance of teammate Alexander-Arnold on the opposite flank, Robertson still produced a display of defensive solidity despite some difficult moments from the rampaging Ricardo for Leicester.

The importance of Liverpool’s full-back duo has been well documented in recent times, though their drive and energy is a crucial part of the Reds style of play.

Robertson’s delivery is also a huge weapon for Jurgen Klopp’s side, and it should have led to a hat-trick for Roberto Firmino who spurned an easy opportunity from a glorious cross at the King Power Stadium.

Liverpool’s comfortable win at Leicester was an ominous warning to the rest of the Premier League, their challengers facing a hugely difficult task to overhaul a side in such formidable form.

Captain Henderson was in fine form as the Reds dominated proceedings at the King Power Stadium, his passing range and vision helping to dictate the play as Jurgen Klopp’s side took complete control of proceedings.

A late injury picked up was a concern, and Liverpool will hope the 29-year-old is fit to return for another huge clash with Wolves this weekend.

Danny Ings prolific run in front of goal has drawn the headlines for Southampton in recent weeks, but just as key to their hopes has been the form of midfielder Ward-Prowse.

The 24-year-old combines work-rate with superb technique, and few players will be more influential to the Saints fight for survival.

Against Chelsea he was once again a stand-out performer for his side, covering more ground and making more tackles than anyone else, his industry vital to his side’s success in claiming a crucial 2-0 victory at Stamford Bridge.

James Ward-Prowse made nine tackles against Chelsea, the most any player has managed in a Premier League game against a 'Big Six' side so far this season.

Much more than a set-piece wizard. 👏 pic.twitter.com/TB6tuvqs6U

Aston Villa’s hopes of staying in the Premier League may hinge on their ability to keep hold of their influential captain, Grealish seemingly adding to his price-tag for potential suitors with each passing performance.

Against Norwich the 24-year-old was once again the star of the show, driving his side forward having been given a licence to drift into dangerous areas by manager Dean Smith.

Grealish registered his fifth assist of the season for Conor Hourihane’s winner, and England recognition is likely to come sooner rather than later for a player who possesses a skillset few midfielders in the division can match.

There were some brilliant Premier League goals during the Boxing Day fixtures, but Crystal Palace’s Ayew must surely take the credit for scoring the very best following his stunning individual effort to down West Ham.

Ayew had earlier provided the assist for Cheikhou Kouyate to equalise against his former club with a lovely cushioned header, before producing a moment of magic to seal victory for Roy Hodgson’s side late on.

The Ghanian showed superb skill and footwork to spin and twist past three West Ham defenders, before showing his composure to dink the ball beyond goalkeeper Roberto.

The Brazilian forward has found his goalscoring form at just the right time for Jurgen Klopp’s Liverpool, scoring winning goals in the Club World Cup semi-finals and final before his two-goal haul downed nearest challengers Leicester in the Premier League.

Firmino would ghost around the back post to head the Reds in front following Trent Alexander-Arnold’s pinpoint delivery, before finding space in the box and meeting the same player’s cross with a deft touch and finish to extend Liverpool’s advantage to three.

The club’s 4-0 victory was an emphatic statement in this season’s title race, and do the Merseyside club now have one hand on the league title?

Bobby Firmino's second goal against @LCFC was our 500th scored under Jurgen Klopp in all comps! 😍 pic.twitter.com/JfTmhRcc2d

Manchester United’s topsy-turvy season produced its latest positive result, Ole Gunnar Solskjaer’s side comfortably dispatching of a side below them in the table in a display that is likely to ease concerns about their ability to break down stubborn opponents.

Newcastle are set-up to defend first and foremost, though they could not deal with United’s attacking forward line with Martial the star turn.

The French forward scored twice to help seal a 4-1 victory, including a lovely deft finish to capitalise on a defensive error to make it four, working in tandem alongside the equally impressive Mason Greenwood and Marcus Rashford.

The 24-year-old also showed a willingness to chase and press which is not always evident in his game, an encouraging display for a player keen to be the Red Devils attacking focal point.