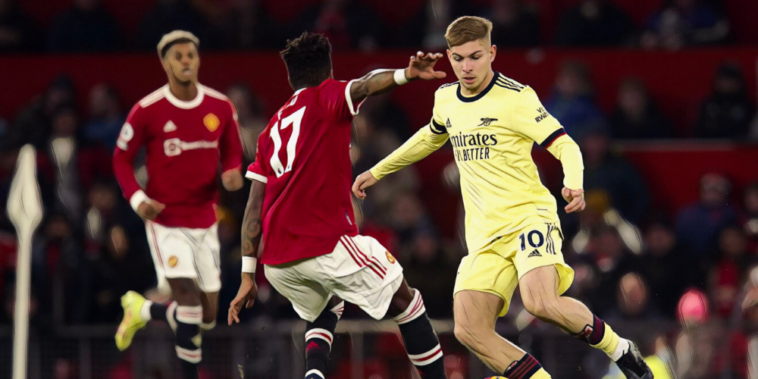 Once again we’re back to preview the Premier League’s weekend action and discuss some of the division’s major talking points.

It’s a huge round of fixtures with massive clashes across the Premier League, including a top four showdown between old rivals at the Emirates and a Merseyside Derby featuring two teams in opposite spirits.

There are also all-Midlands and all-London affairs in a weekend of derby match ups and ahead of the action we’ve picked out some Premier League talking points.

Despite recent comments to the contrary, Arsenal and Manchester United’s duopoly of the Premier League at the turn of the millennium remains the division’s most compelling rivalry.

Ferguson vs Wenger, Keane vs Vieira, the Battle of Old Trafford and pizza-gate, there was no end of captivating moments as the two powerhouses of the Premier League collided.

Both teams find themselves on the outside looking in at England’s elite at present, having fallen on harder times since those golden years two decades ago.

Their latest meeting this weekend could be one of the most important in recent seasons, however, a must-not-lose shootout in the race for Champions League football.

United, in particular, could be out of the top four race with defeat at the Emirates and will start as outsiders against an Arsenal team buoyed by a midweek win at Chelsea.

It might not be the thrilling theatre it once was but this weekend’s Arsenal-United clash will not be one to miss.

Aston Villa have been frustratingly inconsistent since Steven Gerrard’s arrival as manager, each run of momentum having been suddenly halted with a loss of form.

Villa had looked to be climbing towards a potential top-half finish after a run of three consecutive wins without a goal conceded, but have since followed that with four straight losses to drop to 15th.

Focused on the weekend. 💪 pic.twitter.com/E2IfSg4VPz

Gerrard’s side were well beaten at home to Tottenham last time out and the Villa boss will need more from his side defensively this weekend, ahead of a Midlands match-up at Leicester.

Ezri Konsa’s recent form has been a concern and the centre-back could benefit from time out of the side, with Callum Chambers a contender to come in alongside Tyrone Mings.

Gerrard should be given time to make his mark after arriving at Villa Park in mid-season and the club’s inconsistencies will have helped him make key decisions ahead of an important summer transfer window.

Pep Guardiola knows there is no room for error from his side at present, having returned to the top of the Premier League with a 3-0 win over Brighton on Wednesday.

Liverpool’s thrashing of Manchester United the previous evening had upped the pressure, but City held their nerve to break through Brighton’s resistance and take another step towards the title.

“We have just one month to finish the Premier League and we know what we have to do,” Guardiola told Sky Sports after the game.

“If we drop two points Liverpool will be champions. We have real tough fixtures ahead of us.”

Kevin De Bruyne proved the difference in creating two goals against the Seagulls and the Belgian midfielder continues to be the champion’s go-to man.

However, Guardiola will demand more from De Bruyne’s supporting cast with City’s recent performances having lacked the spark shown earlier in the campaign.

With Liverpool in fine fettle and ready to capitalise on any slip, this weekend’s clash with Watford – a side City have won the last 14 meetings with at an aggregate score of 53-7 – provides a good chance to find form again.

Christian Eriksen has returned to his best at Brentford to help inspire the Bees’ climb away from danger, with Thomas Frank’s side in pursuit of a top-half finish after four wins from five games.

The Denmark international will meet up with familiar faces as Brentford take on former side Spurs this weekend, whilst the North Londoners are now under the management of the Dane’s old Inter Milan boss Antonio Conte.

Without him they were winless in eight Premier League games, losing seven and getting dragged into a relegation battle.

The club have since won all five matches he's started 🙌 pic.twitter.com/H8gUCHmQ1o

It’s the latest chapter in Eriksen’s remarkable return and Spurs will know better than most the danger that the 30-year-old will pose to their Champions League chances.

Beaten at home to Brighton last weekend, Spurs can ill-afford another slip-up against an in-form Brentford and their former fan favourite.

Brighton and Southampton might not quite be considered a traditional derby clash, with some 64 miles separating the sides on the South Coast.

As the two teams renew rivalries of sorts this weekend, however, Brighton will be hoping to improve on a wretched recent record against Southampton.

The Seagulls have won just one of the 10 meetings in all competitions since their promotion to the Premier League and have been beaten in four of the five encounters at the Amex Stadium.

Looking ahead to Sunday. 👀 GP discusses the fine margins behind our home and away form. 👇 pic.twitter.com/kGai7Nclq8

Graham Potter’s team will need to improve on a poor home record this season to improve those statistics, with only Watford and Norwich having taken less points than the Seagulls in home fixtures this season.

Goals have been a problem and their total of just 10 at home is the lowest of any Premier League side in 2021/22.

The defeat continued the club’s recent wobbles in home fixtures, though Tuchel’s excusing of his side failed to hide another disappointing display from the West Londoners.

It’s now three consecutive home defeats for Chelsea, a sequence that has seen 11 goals conceded with both Brentford and Arsenal hitting four.

Thomas Tuchel has now lost as many Premier League home games in charge of Chelsea as José Mourinho did during his two spells at the club:

West Ham will fancy their chances against an uncharacteristically vulnerable Chelsea defence this weekend, having come from behind to win 3-2 in the reverse fixture.

Tuchel’s problems are greater than a poor pitch at present, with Chelsea’s home record only the ninth best in the division. The German has now lost five of his 25 home games in the Premier League, as many as Jose Mourinho lost in 106 games across his two spells with the club.

Merseyside moods could hardly be more contrasting ahead of Sunday’s derby at Anfield, with Liverpool in fine form and challenging for multiple honours as their city neighbours scrap for survival.

It’s been a torrid season for Everton who are just a point outside the Premier League’s relegation places and this weekend’s clash points towards a convincing win for Liverpool on home soil.

Everton ended their Anfield hoodoo against a depleted Liverpool in last season’s fixture, but Jurgen Klopp’s quadruple-chasing team are another beast this time around.

A dazzling Merseyside derby display from the Reds in 2019 🤩 #LIVEVE pic.twitter.com/RjKm9zp5lA

Liverpool are unbeaten at Anfield this season and boast the Premier League’s best home record, ahead of the visit of an Everton side with just one win on the road and bottom of the division’s away standings.

Form can go out of the window in derby meetings, but it looks unlikely that Everton can cause an upset this weekend.

‘Overtrained’ Leeds have had chance to rest

Jesse Marsch opened up on Marcelo Bielsa’s infamous training demands earlier this month, stating his belief that the Argentine overtrained the squad he inherited at Leeds.

“The injury issue had a lot to do with the training methodologies,” Marsch told talkSPORT.

“These players were overtrained. It led to them being physically, mentally, psychologically and emotionally in a difficult place to recover from week to week, from game to game.”

In a season packed full of congestion, Leeds have had the rarity of significant time to rest and will take on Crystal Palace on Monday after a 16-day break.

That room to recover should have provided Marsch with ample time to reinvigorate his team and implement his methods, as the American looks to build on a promising start at Elland Road that has included three wins and a draw from their last four games.

Not quite safe despite a five-point barrier to the bottom three, a refreshed Leeds will hope to pull further clear with three points at Selhurst Park.