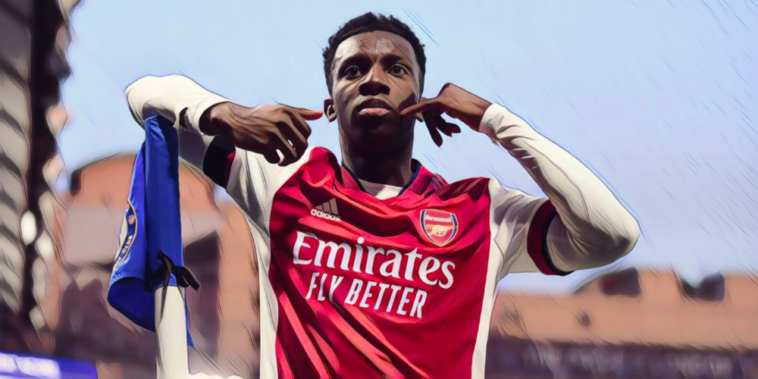 Each week we delve through the Premier League’s weekend action and compile our divisional Team of the Week, with our latest XI combining the best performers from the midweek fixtures.

Liverpool thrashed Manchester United for a second time this season in a dominant performance at Anfield, though Manchester City moved back to the top with a 3-0 win over Brighton the following evening.

There was a thrilling London derby clash between Chelsea and Arsenal, whilst Everton left it late to snatch a precious point against Leicester.

A confident Cruyff turn inside his own area set the tone for a performance in which Alisson was rarely troubled, as Liverpool beat Manchester United 4-0 at Anfield.

The Brazilian’s distribution was excellent throughout including a brilliant drilled pass into Luis Diaz, with Alisson remarkably having more touches, making more passes and completing a higher pass percentage than any Manchester United player on the pitch.

Not a single Manchester United player had more touches, passes, or a higher pass percentage than Alisson 😳 pic.twitter.com/miNKZDqkWk

He remained alert as the visitors added some pressure early in the second half, including a fine double save from Anthony Elanga and Marcus Rashford to deny goals that would have counted despite the lineman’s flag.

Eddie Howe has had some impact at Newcastle, with a number of forgotten figures having returned to prominence since the former Bournemouth boss’ arrival.

Among them has been Krafth who in recent weeks has won over his doubters, following a superb showing against Leicester last weekend with another solid outing in the 1-0 win over Crystal Palace.

John Stones has been arguably Manchester City’s most consistent performer in recent weeks and certainly their most impressive defensively, with the England international again a stand-out during the champion’s 3-0 win over Brighton.

Liverpool’s win the previous night had upped the pressure on Pep Guardiola’s side, but a patient approach paid dividends as City scored three second-half goals to move back to the top of the Premier League table.

Stones was a composed figure at centre-back before moving to right-back, where he showcased his confidence and versatility with a number of enterprising advances down the flank.

Substituted with muscle tightness in the second period, Guardiola will hope it is not an issue that sidelines Stones ahead of a crucial period.

One of the shrewdest signings of the January transfer window, Newcastle’s winter window recruitment has all but assured safety after reaching the 40-point mark with a win over Crystal Palace.

Dan Burn has been an excellent addition to the side and produced another strong performance against the Eagles, dealing with the visitor’s threat and winning a huge five aerial duels.

Rival fanbases ridiculed the unfashionable arrivals of Burn, Chris Wood and Matt Targett in January after the promise of marquee names arriving at St James’ Park, but the trio have added to a side that have grown in spirit and confidence to challenge for a top 10 finish.

🗣 "I thought to a man everyone was brilliant again."

Robertson’s endless energy and tenacity helped set the tone for a dominant Liverpool showing, bounding down the left flank in signature fashion throughout.

The Scotland captain’s interception and driving run forward led to the Reds’ third goal of the evening, before another regaining of possession started the move for Liverpool’s fourth.

Robertson remains the best in the business when it comes to Premier League left-backs and his style is tailor-made for Jurgen Klopp’s demands.

Mohamed Elneny has never been the most fashionable footballer at Arsenal but the Egyptian came in from the cold at Chelsea to help his side to a crucial win.

The Egyptian was making his first appearance since New Year’s Day and was crucial to the Gunners’ 4-2 win at Stamford Bridge, a win that has reignited their hopes of a top four finish.

Full of hustle and tenacity at the centre of the side, his selfless running helped provide the foundation for three points and should have earned him another chance ahead of a huge showdown with Manchester United this weekend.

Thiago Alcantara was on another level as Liverpool thrashed Manchester United at Anfield, his first half in particular exceptional as he completed 59/60 passes for a 98% pass accuracy, created three chances and completed 100% of his attempted take-ons.

The Spaniard had the visitors on strings and orchestrated a huge game with the nonchalance of a man enjoying himself on the big occasion, earning a deserved standing ovation after he was substituted in the second period.

Stop what you’re doing and start your day in style with this @Thiago6 masterclass against Manchester United 😍 pic.twitter.com/RriT59CUdQ

Liverpool have not lost a game in which Thiago has started this season and he will be crucial to the Reds’ hopes of chasing down Manchester City in the title race.

Took hold of the game when Manchester City needed it most, ensuring the club’s clash with Brighton failed to get nervy.

De Bruyne showed strength and speed to stay on his feet amid pressure and set up Riyad Mahrez for the crucial opener, before excellent awareness was followed with a subtle touch to tee up Bernardo Silva’s goal.

Very proud to have played my 300th game for this club. On to many more pic.twitter.com/x4e9QkdBNy

When it really matters it is often De Bruyne who delivers for this side and the Belgian has found form at a crucial time in City’s championship challenge.

Mohamed Salah silenced the doubts over his recent form with a return to his best this week, scoring two and creating another to inflict more misery on Manchester United.

After scoring a stunning hat-trick in the reverse fixture at Old Trafford, Salah again proved a nightmare for the Red Devils and teed up the opening goal for Luis Diaz inside five minutes.

He scored the second after a wonderful pass from Sadio Mane, before adding the fourth with a deflected effort beyond David de Gea.

On this form a front three of Salah, Mane and Diaz look almost impossible to stop.

Opened the scoring in the opening exchanges of Liverpool’s win over Manchester United in another performance that proved he belongs in this side.

Diaz was full of direct and dangerous running, causing problems all evening with his willingness to take on defenders on the inside or out.

He was involved in the build-up to the second goal before teeing up Sadio Mane for the third, his endeavour appreciated from the home crowd as he received a raucous ovation upon his substitution.

Eddie Nketiah has been vocal in his frustration over a lack of opportunities at Arsenal, but the forward took his chance in style during the 4-2 win at Chelsea.

In just his second start of the Premier League season the 22-year-old scored twice to earn the Gunners a win at Stamford Bridge, first capitalising on a mistake from Andreas Christensen to open the scoring.

What a performance from the No. 30. pic.twitter.com/YafE2fnMTm

He added a second to restore Arsenal’s advantage after bundling his way into the box and Arteta admitted afterwards he has not ‘been fair’ to the forward in terms of chances in his side.

After his match-winning performance at Chelsea, Nketiah – out of contract at the end of the season – could now have the chance to fire Arsenal’s Champions League chase.