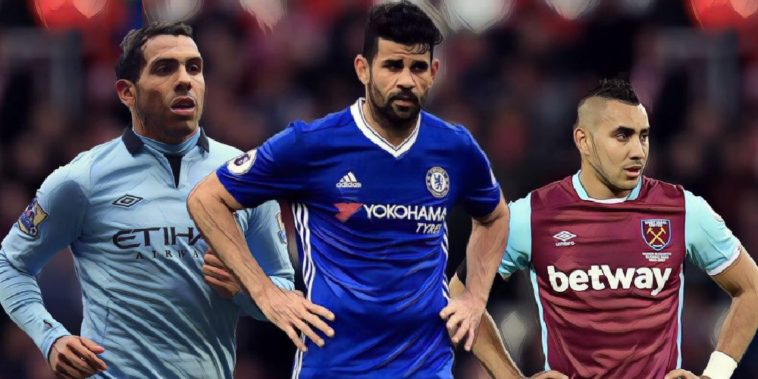 Player-power is perhaps at an all-time high, with contracts in modern football being worryingly disrespected.

Footballer’s now live in an era of wanting and getting, with agents perhaps the driving force in public displays of unrest.

Throughout Premier League history we’ve seen several stars throw their proverbial toys out of the pram, throwing a protracted sulk to engineer moves away.

Harry Kane is the latest player to take drastic action, with the England captain failing to return to Tottenham training for pre-season as he bids to engineer an exit to Manchester City.

Following the forward’s refusal to train with the north London side, we look at six Premier League players who previously went on strike.

Following the Foxes’ rejection of a January deadline day bid from Manchester City for his services, Mahrez went AWOL, going on a two-week strike and being fined £240,000 by the club.

City returned in the summer and eventually signed the Leicester star for a then club-record £60m, as Mahrez finally secured his move to the reigning Premier League champions.

Tevez famously refused to come on as a substitute during Manchester City’s Champions League clash with Bayern Munich in 2011, sparking a furious response from manager Roberto Mancini.

It was the first public display of unrest between the pair, with Tevez going on strike in his native Argentina following the fall-out from the incident.

Tevez’s unscheduled mid-season break to Buenos Aires is believed to have cost the forward over £9m in wages, with City fining the star who seemed perfectly happy enjoying his leisure time in his homeland.

Despite his career with the club appearing all but over, Tevez remarkably returned to City after a move to Serie A fell through and played a crucial role in the club’s end to the season, remaining a City player until a move to Juventus in 2013.

A player who has long divided opinion and remains one of the true sh*t-houses in the modern game, Diego Costa had enjoyed a successful spell at Chelsea before manager Antonio Conte decided he was surplus to requirements.

An infamous text from Conte, informing Costa he had no future at the club, sparked a period on strike with Costa remaining in Brazil as pre-season began in 2017.

Having scored 52 league goals in just 89 appearance and played a crucial role in two title triumphs, Costa was rightly upset after being ostracised and accused Chelsea of ‘treating him like a criminal’, the forward eventually securing a return to former club Atletico Madrid in the winter window.

Anyone who has been present during any of Raheem Sterling’s subsequent returns to Anfield will be in no doubt over the Liverpool fans’ views on the England winger, an intense chorus of jeers having greeted his every touch.

The ill-feeling comes from Sterling’s refusal to join the club’s pre-season tour of the Far East and Australia in 2015, amid reported interest from Manchester City.

The then 20-year-old informed manager Brendan Rodgers that he had no plans to be included on the tour, eventually forcing through a £50m move to the Etihad.

Liverpool fans were outraged at what they perceived to be a young player disrespecting the club, Sterling’s refusal a tactic to engineer a move to the Manchester side.

Few players in the Premier League-era have been as warmly received at West Ham as the supremely talented Frenchman, with the Hammer’s faithful taking the playmaker to their hearts during a short-lived spell at the club.

After a stunning debut season Payet had been in-demand, a host of Europe’s clubs circling further following some outstanding performances at the 2016 European Championship for France.

Payet was reportedly unsettled following his return from the tournament and it wasn’t long before his unrest became publicly apparent.

The fan’s affection towards Payet made his strike that much harder to take, with the playmaker informing the Hammers he would ‘never kick a ball again’ for the club following a rejected bid from Marseille.

Payet had cited being homesick as a reason for his desire to leave, though West Ham were determined not to lose their influential star.

Payet’s refusal to even train eventually forced West Ham’s hand however, and the midfielder was sold to former club Marseille in 2017.

Arsenal captain Koscielny’s refusal to join the club’s pre-season tour sent shockwaves through the club’s fanbase, the French defender having been a true servant of the club during a nine-year career at the Emirates.

Koscielny was keen to return to his native France after almost a decade in the Premier League and requested to leave amid interest from Lyon, Bordeaux and Rennes.

Arsenal’s refusal to sanction his sale saw the defender subsequently go on strike, refusing to join up with the rest of the squad for their pre-season tour of the US.

The 33-year-old had requested to be allowed to leave the club on a free transfer, despite having a season remaining on his contract at the Emirates.

Despite an initial reluctance to allow his departure, Arsenal eventually sanctioned Koscielny’s sale to Bordeaux in a deal worth £4.6m, with the Gunners’ fanbase left further outraged following a controversial player reveal that saw the centre-back remove an Arsenal shirt to unveil the colours of his new club.