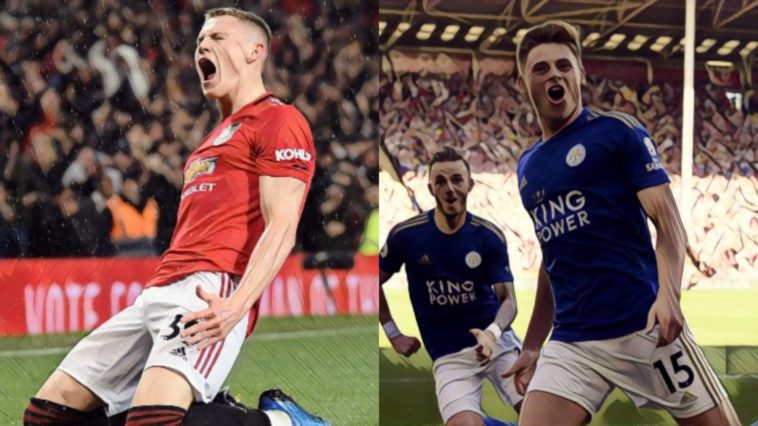 The scenes at the end of the Manchester Derby, following Scott McTominay’s goal to secure Manchester United‘s a 2-0 victory over Manchester City, were absolutely top quality. We love a bit of limbs, so we do.

While everyone has been busy bigging up the likes of Jack Grealish, Mason Mount and James Maddison, Harvey Barnes has been having a real coming-of-age campaign for Leicester City. He performed really well on loan at West Brom in the Championship in the first half of last season, came back in January and did some bits for the Foxes, and now he is flying it.

Barnes scored two goals, won a penalty and generally ran the show against Aston Villa on Monday night, bringing his tally for the season to six goals and six assists. He’s only 22 years of age, but surely he is in the conversation to make England’s Euro 2020 squad now.

Everton got thoroughly splatted by Chelsea on Sunday afternoon, and the best goal of the lot was Willian‘s long-range strike that whistled past Jordan Pickford. The Brazilian is in “give me a new contract” form at the moment.

We are big fans of Bruno Fernandes‘ cheeky free-kick to set up Anthony Martial’s goal against City. One of the highlights of the weekend.

Everyone is talking about that double save by Dean Henderson this past weekend, and while it was indeed impressive, everyone seems to have ignored this top class double save by Southampton‘s Alex McCarthy against Newcastle United.

Never give up. #MondayMotivation pic.twitter.com/QKu3y0mSvv

Premier League Team of the Week for GW29

Clearance of the Week

We’ve invented a new award to give praise to this exceptional James Milner goal line clearance. The man is 34-years-old yet still pulling off moments like this.

Dominic Calvert-Lewin was one-on-one with Chelsea goalkeeper Kepa Arrizabalaga in a terrific position to shoot on goal, but he scuffed his shot wide with a terrible effort. Given his recent excellent form, you would have expected the Toffees striker to bury it.

What is it with the goalkeepers in the Premier League this year? Half of them are making world class saves every week, the other half are dropping clangers like there’s no tomorrow. This gameweek we have a goalkeeping howler for each day:

Saturday: Hugo Lloris was the chief culprit on Saturday, failing to keep a hold of a long range shot, spilling the ball right into the grateful feet of Chris Wood to score the game’s opener in Burnley’s 1-1 draw with Spurs.

Sunday: Ederson followed that up with a poor effort at a save to allow Anthony Martial score the opener in the Manchester Derby the very next day, before literally throwing the ball to McTominay for the second. Palm, meet face.

Monday: And then Pepe Reina completed the set with a rush of blood to the head, rushing out to meet the speedy Harvey Barnes, before inevitably getting done by the youngster.

PEPE MATE WHAT ARE YOU DOING pic.twitter.com/WXF4Rku1MU

We are rapidly finding out that society is ill-equipped to deal with the potential public health crisis that is the Coronavirus, but not even the small things are being handled well. Let’s take the Premier League’s new handshake policy, for instance, which effectively banned the pre-match shaking of hands that has long been tradition in football.

It’s a sound policy in and of itself; lessen the amount of skin contact players have with each other, which will hopefully slow down any potential for the spread of COVID-19.

Whereas this just looks silly… pic.twitter.com/toumbYVXRd

But what about all of the physical contact that happens within a match itself? Or what about scenes such as the ones filmed in the video at the top of this article, where players not only celebrated in a big huddle, but were also in contact with supporters?

We’re not expecting the Premier League to solve the problems this poses at the snap of a finger, but surely more thought should have been put into it. In any case, football might be stopped altogether soon enough…

Read: Tino Asprilla was mad as a bag of spiders, but he was brilliant, too

See Also: How Sky ignited a Premier League revolution in the nineties