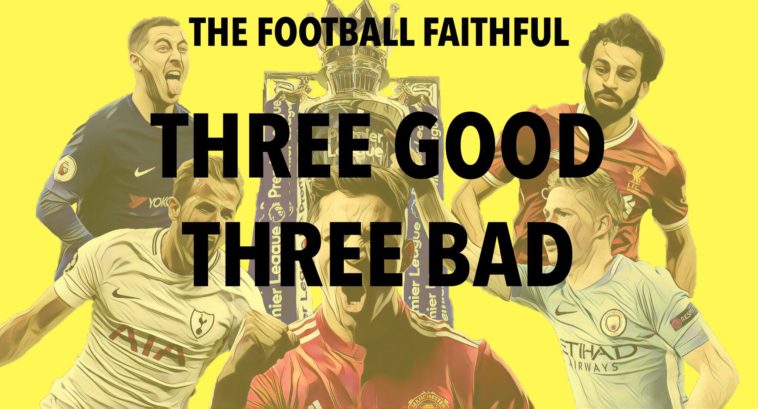 The veteran forward has followed in the footsteps of Jamie Vardy, Rickie Lambert and Charlie Austin by forging a Premier League career for himself after years in the lower reaches of the football league.

At 34, Murray plays with the shrewdness of a man who knows his limitations all too well. He is not quick, obviously, but he possesses a neat first touch and has an eye for a tidy finish. His goal on Sunday against Manchester United was yet another feather in the cap for Brighton’s popular forward. Arriving in front of Lindelof, he was able to steer the ball beyond De Gea, a very difficult finish that he made look very easy indeed.

They will need men of his experience to do that with sufficient frequency if they are to stay up. He is off the mark now and should be full of confidence after an excellent display.

Not a great day at the office for Ivorian defender. In fairness, he was not helped by his partner Lindelof down at The AmEx, however, you would have expected so much more composure and better decision making by the centre-half. He looked shaken and rattled in the first half onslaught by Brighton and was way out of position for the opener.

He was all at sea for the second goal and guilty of an awful piece of judgement which gave away the penalty at 2-1, which effectively killed the game. He looked like a man playing without knowledge of his craft. With a man running away from goal, and with a lot to do to score from a difficult angle, Bailly dived in, getting nowhere near the ball and gave the referee the easiest call you’ll see for a penalty.

Mourinho will be concerned by how rash and panicked his defender looked on the day. Worrying signs for United, they will hope to see rapid and dramatic improvement.

Superlatives are being rapidly exhausted when it comes to the Argentine. Yet another hat-trick for the world-class striker as he helped to shunt Man City back to the top of the league. Every week they look dangerous and with a man as evergreen as Aguero, they remain very much in pole position to regain their title.

One of the most impressive things about their number 10, is his ability to score all kinds of goals. Anywhere this man is in the final third, is dangerous and he is always looking to shoot no matter what the score is. Huddersfield in fairness tried to get close, but they were ultimately undone by a top-class player, at the very top of his game.

Good is a bit of understatement.

From one title winner to another, but for once Jamie Vardy had a day to forget in Leicester colours. Leicester may have picked up an important win, but it was a victory with something of a blemish. In the second half, the England striker dived in recklessly to win the ball with his side in control and ahead at home to Wolves.

It was not the kind of thing we have come to expect from Vardy, and in all seriousness, he could have caused Doherty some serious harm as he connected with the defender’s standing leg. A straight red was as thoroughly deserved as the tackle was unwarranted. Thankfully Doherty got up and carried on, but it could have been a real horror moment so early in the season.  It could also prove to be a costly suspension for Leicester.

Howe is a man who simply keeps on defying the odds.  At just 40 years old, he is both the Premier League’s youngest, and longest serving manager. More impressively he has achieved his success at Bournemouth on his own terms.  The football played by the club is admirable and brave, but they have never really looked in trouble and are already off to a wonderful start this season.

The club’s turnaround at West Ham was fairly typical of Howe’s men. Despite going a goal down, they didn’t panic and continued probing for openings. Wilson’s wonderful goal at the end of an audacious dribble past five opposing players is a sign that his manager is happy for this team to express themselves on the pitch.

Now in their fourth season, Howe may well feel emboldened to take sides on with more ambition, and with the squad he has assembled it is little surprise that they are going to West Ham and getting thoroughly deserved victories. The future is bright for the south coast club and their young manager.

As stinkers in the Premier League go, Kennedy’s performance against Cardiff is up there.  The Brazilian winger, on loan from Chelsea, did little to help his top flight credentials. Benitez will be rueing his late penalty miss, but that was only really the icing on the cake. It truly was an awful penalty though, devoid of any composure or confidence, and it could really have given his side a much needed three points.

In a match which more resembled a mid-table Championship clash, Newcastle fans would have hoped for so much more from their Brazilian number 15. His role is to create and be an attacking threat throughout. He duly managed to miss almost every pass he played forward at Cardiff and then subsequently should have been sent off for a hideous kick out on Victor Camarasa. It was a nasty incident which showed a petulant side to Kennedy and it could have been so very costly to his team on the day. Newcastle will need a lot better from him this season.