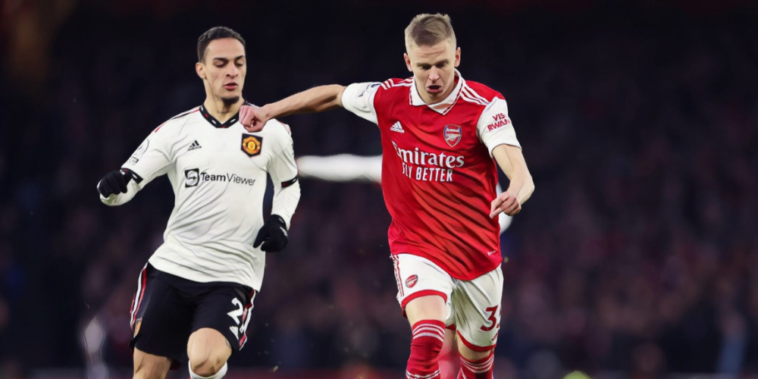 The ‘Big Six’ mini-league can have a decisive outcome on the Premier League table, with fixtures between the division’s top sides often important in the outcome of the title and race for Champions League football.

Arsenal have continued their strong season this month with crucial victories over Tottenham and Manchester United, extending their impressive record in the biggest games.

Following those wins, we’ve decided to compare each of the ‘Big Six’ and their records against each other this season.

Antonio Conte has faced questions over Tottenham’s mentality this season and the north Londoners have struggled when coming up against the rest of the ‘Big Six’.

In six games against the Premier League’s top clubs this season, Spurs have taken just a single point. That draw came with a last-gasp Harry Kane equaliser at Chelsea in August, with Spurs having since lost all five meetings with Arsenal (twice), Manchester United, Liverpool and Manchester City.

Tottenham have now played the five other teams in the big six at least once in the Premier League this season:

It is a record that Conte will know must improve. Spurs took 11 points from their ten games against the ‘Big Six’ last season, a record which included home and away wins against Manchester City. This time around Spurs have failed to win in six fixtures, scoring six goals and conceding 15 times.

Chelsea are also without a win in ‘Big Six’ match-ups this season, but have taken three points from their five fixtures to date.

The west Londoners have drawn with Tottenham, Manchester United and Liverpool, while suffering defeats to title-chasing Arsenal and Manchester City.

However, four of Chelsea’s five ‘Big Six’ contests have come on home soil and with trips to the Etihad, Old Trafford, the Emirates and Tottenham Hotspur Stadium still to come this season, improvements will be required from Graham Potter’s struggling side.

Chelsea have scored just three goals in their five fixtures against ‘Big Six’ sides this season and have won just two of their last 11 games in the Premier League. Tenth in the table, the pressure is on Potter to turn around the club’s fortunes.

Liverpool went unbeaten in games against the ‘Big Six’ in 2021/22, securing four wins and six draws against the Premier League’s leading sides.

Jurgen Klopp’s side have struggled to replicate those levels this time around however, and are ninth in the Premier League table. It’s been a mixed record in clashes against the ‘Big Six’, as the Reds have recorded two wins, a draw and two defeats.

Liverpool lost at both Manchester United and Arsenal, but beat Spurs in north London and secured a hard-fought 1-0 win over Manchester City at Anfield. A goalless draw with Chelsea last weekend made it seven points from five games against the ‘Big Six’ this season.

Manchester City dominated the ‘Big Six’ mini-league last season on their path to being crowned Premier League champions once again.

City won six, drew two and lost two of their ten games last season, with their victories including home thrashings against Arsenal (5-0) and Manchester United (4-1). This time around City have beaten Manchester United, Spurs and Chelsea, but have suffered defeats on the road at Liverpool and in the reverse Manchester Derby fixture earlier this month.

Right back in it! 💥@Mahrez22's first goal of the night was a belter 🙌 pic.twitter.com/fKt65LcckZ

Pep Guardiola’s side are second in the table, five points behind Arsenal having played a game more. The title challengers have not faced off this season to date, in two fixtures which could have a decisive impact on the destination of the title.

City first travel to face Arsenal on February 15, before their second showdown at the Etihad on April 26. The two teams will meet in a dress rehearsal in the FA Cup’s fourth round this weekend.

Manchester United have made progress this season with the club’s 13 points in ‘Big Six’ encounters already more than the Red Devils amassed in 2021/22 (11).

Erik ten Hag’s team have shown encouraging signs and underlined their improvement with a 2-1 win over Manchester City this month, with the Citizens, Tottenham, Liverpool and Arsenal having all departed Old Trafford without a point this season.

Marcus Rashford has been in fine form for Ten Hag’s team and has five goals against the ‘Big Six’ during the current campaign.

After the club’s worst ever Premier League season in 2021/22, United are showing shoots of recovery under their new head coach.

Arsenal have turned the ‘Big Six’ mini-league on its head this season, topping the head-to-head games after finishing bottom last season.

The Gunners earned just nine points from ten ‘Big Six’ games last season, but have won five of six this time around in what has been the club’s best ever start to a league season. That figure is the more than in any full season since 2007/08 (18) and has contributed to the north Londoners lead in the Premier League title race.

Mikel Arteta’s side have shown a steel and mettle that has been lacking in past Arsenal teams, opening up a five-point advantage at the top of the division with a game in hand.

Bukayo Saka has now scored or assisted against every ‘Big Six’ side that he has faced this season, after scoring a stunning effort in last weekend’s win over Manchester United. Arsenal have already faced both United and Spurs twice this season, with no other team having already played two of the other ‘Big Six’ clubs home and away.