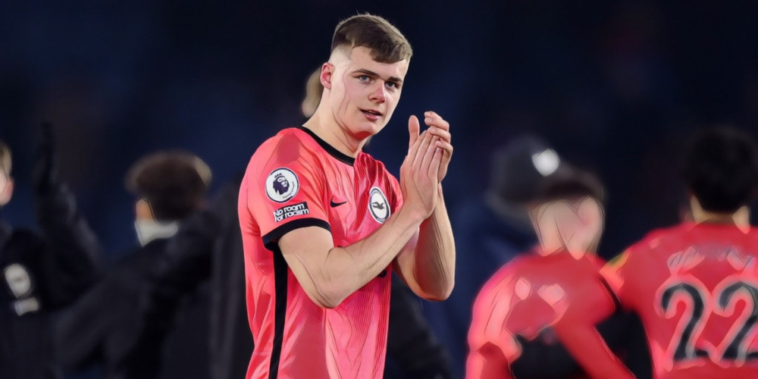 It often takes a special talent to make an impression at Premier League level as a teenager, but this season has proven a breakthrough campaign for several starlets at top-flight clubs.

English football is home to some brilliant prospects right now and we’ve decided to look at the teenage talents embracing the fearlessness of youth and making their mark during the current campaign.

Here are eight teenagers impressing in the Premier League this season.

Wilfried Gnonto has become a fans’ favourite at Leeds this season with the summer arrival having provided a number of exciting cameos for Jesse Marsch’s side.

Gnonto signed for Leeds after scoring ten goals during FC Zürich’s title-winning campaign last season and has made an instant impression on the Elland Road crowd.

After a period of adaptation, the 19-year-old has shone across the past month, scoring his first Premier League goal in the 2-2 draw with West Ham on January 4. He followed that up with a brace as Leeds beat Cardiff in their FA Cup replay, with his double including a stunning scissor-kick to open the scoring.

Gnonto is already a favourite with Roberto Mancini at international level, having earned eight caps for Italy since his debut last summer. He became the Azzurri’s youngest-ever goalscorer after netting against Germany in June 2022, breaking a 64-year-old record.

Have Brighton found the solution to their centre-forward problem?

The Seagulls have been a frustrating watch in recent seasons, with the club’s fine work in the final third undone by a wastefulness around goal. Brighton might just have found the answer in Evan Ferguson, who has shone at the Amex Stadium this season.

Ferguson has taken his chance in the side and is thriving under the management of Roberto De Zerbi, having scored four goals and laid on a further three assists in eight appearances across all competitions.

The 18-year-old – who made his League of Ireland debut for Bohemians aged just 14 – has averaged a goal involvement every 40 minutes in the Premier League this season, the best ratio of any player to have played 90+ minutes.

He became the second-youngest player in Premier League history to both score and assist in the fixture earlier this month, with only Michael Owen (17y 364) having done so at an earlier age.

It’s early days, but Ferguson looks a class act and has the potential to develop into the perfect focal point for De Zerbi’s front-footed side.

Manchester City boast arguably the most talented squad in European football right now, a situation which makes the emergence of Rico Lewis even more impressive.

The Bury-born defender made his first-team debut as a 17-year-old in August and has since emerged as a reliable option for Pep Guardiola this season. Lewis has stepped into the City side with ease, appearing at home in the demands of Guardiola’s system.

The teenager – who captained City’s u-18 side to the Premier League 2 title last season – became the youngest player to score on his first Champions League start against Sevilla in November and has made 13 appearances in all competitions this season.

No teenager to have attempted 200+ passes in Europe’s top five leagues has recorded a better accuracy (93.9%) than Lewis this season and his evolution has seen the 18-year-old oust Kyle Walker from the starting side in recent fixtures.

Lewis – who was nicknamed ‘little Philipp Lahm’ by Guardiola earlier this month – even featured in midfield against Wolves and has a combination of tactical intelligence and confidence that is rare for a footballer of such inexperience. His ability to perform either role, often simultaneously in the demands of Guardiola’s tactical plan, has seen his stock sharply rise.

Chelsea have been a production line for talent in recent seasons, with Mason Mount, Tammy Abraham, Reece James, Conor Gallagher, Fikayo Tomori and Marc Guehi among the names to have come through the club’s ranks before earning England honours.

Lewis Hall is the latest Cobham graduate who has been given a chance at Chelsea, with Graham Potter having provided the teenager with a run in the side this season. The 18-year-old has started each of the club’s last four league games, impressing despite often featuring in an unfamiliar role at left-back.

Hall’s favoured role is in midfield, but he has been used on the left flank in recent games with Potter having preferred the academy prospect to £62m recruit Marc Cucurella. It’s a testament to the tenacity Hall has shown that he is receiving regular minutes and, while raw, has shown a confidence that will stand him in good stead moving forward.

Omari Hutchinson is another teenager who will be hoping for more regular involvement, having proven a cut above PL2 level. The summer signing from Arsenal impressed during Chelsea’s preparations for the season’s restart.

Liverpool’s midfield malaise has provided Stefan Bajcetic with a chance to impress this season and the teenager has shown encouraging signs in recent games.

The 18-year-old arrived at Anfield from Celta Vigo in 2020 and became Liverpool’s youngest-ever Champions League debutant against Ajax in September.

Bajcetic has made ten appearances in all competitions this season and scored his first Premier League goal against Aston Villa on Boxing Day, becoming the second-youngest Spaniard to score in England’s top division, after Cesc Fabregas.

He was named man-of-the-match as Liverpool won an FA Cup replay at Wolves this month, with his aggression in the press and composure in possession having been lacking in a lacklustre Liverpool midfield this season.

Stefan Bajcetic has got a bright future ahead of him! 🙌 pic.twitter.com/d21cFToRtz

Such has been his impact, he was selected ahead of Fabinho and Jordan Henderson against Chelsea last weekend, emphasising Jurgen Klopp’s faith in a footballer set to be fast-tracked into Spain’s u21 side.

Alejandro Garnacho is having a breakout campaign at Manchester United. The teenager was the star of the club’s FA Youth Cup triumph last season and made his senior debut in April, before earning a regular role in the first team under Erik ten Hag.

The exciting Argentine has proven to be a game-changer for the Red Devils, often impacting games off the bench with his explosivity in the final third. He scored his first senior goal against Real Sociedad in the Europa League, before netting a stoppage-time winner against Fulham to open his Premier League account.

The 18-year-old has two goals and four assists in 17 appearances this season, of which just six have come from the start. It is an average of a goal or assist every 102 minutes across all competitions.

Erik ten Hag says 18-year-old Alejandro Garnacho is unlike many players in the Premier League 👀 pic.twitter.com/C4XGvPmXqo

Garnacho came off the bench to assist Marcus Rashford’s winner against Manchester City this month, becoming the youngest player to create a goal in the Manchester Derby.

United are aiming to tie the teenager down to a new long-term deal, with some of Europe’s top clubs monitoring his progress at Old Trafford. Garnacho has a match-winning spark that is sure to attract interest from rival clubs.

Manchester City’s decision to allow Romeo Lavia to leave last summer has proven to be Southampton’s gain, with the midfielder soon proving he is capable of an impact at Premier League level.

With a path to first-team football blocked at the Etihad, Lavia has taken an alternative route to regular minutes at St Mary’s and has made 12 appearances for the Saints this season. Aggressive off-the-ball and intelligent in possession, Lavia has proven a fine fit in the centre of the Southampton side.

Southampton had success in poaching prospects from ‘Big Six’ clubs last season, with both Armando Broja and Tino Livramento impressing on the South Coast. Lavia looks set to be the next talented teenager to thrive with regular minutes and his performances of tenacity and control have already won admirers.

He is comfortable taking possession in dangerous areas and has the confidence and cool to step away from challenges in a press-resistant manner. Always willing to demand the ball and attempt progressive passes, he has a bright future in a Southampton side placing huge faith in talented youngsters.

City included a buy-back clause in the £10m deal that saw Lavia leave the Etihad last summer and the defensive midfielder’s value has already risen sharply. Chelsea are understood to have seen a £50m offer turned down last summer, just weeks after his initial arrival at Southampton.

Levi Colwill is viewed as one of the most exciting graduates to have emerged from Chelsea’s academy in several seasons and has began to thrive after a tough start on loan at Brighton.

Colwill shone during a loan spell at Huddersfield last term as the Terriers reached the Championship play-off final, before signing for Brighton last summer ahead of a first campaign at Premier League level.

The 19-year-old started the season on the bench, but has been a central part of the Seagulls’ side in recent weeks after earning a regular role under Roberto De Zerbi.

He shone during the recent 3-0 win over Liverpool at the Amex Stadium and The Athletic are reporting that Gareth Southgate is giving ‘serious consideration’ to giving Colwill a first senior call-up with England.

Left-footed and comfortable on the ball, he has recorded an 89.8% pass accuracy this season and is ideally suited to progressing the ball from a left-sided centre-back role.

It appears an oversight that Chelsea have invested such huge sums on defensive additions in recent windows, given the potential of the Cobham-produced Colwill.