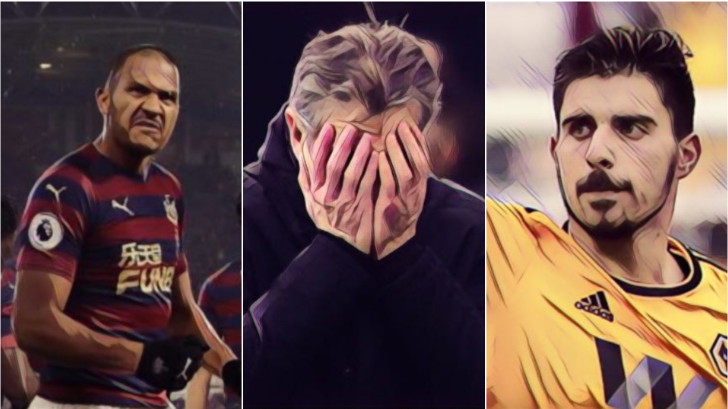 Have you even had time to digest all of the Premier League madness yet? Let us help you with that. Warning: This article contains copious amounts of Wolves vs Leicester City. Enjoy.

Only just seen this.

You know it’s a good week in the Premier League when there are two seven-goal thrillers in the one day, but Liverpool vs Crystal Palace falls just short in this category. But only just.

As entertaining as the game at Anfield was, there was a feeling of inevitability about the end result. Wolverhampton Wanderers 4-3 win over Leicester City on the other hand, couldn’t be beaten for competitiveness or sheer drama, even if the football itself was lacking in quality.

Wolves raced into a 2-0 lead in the first-half and it seemed for all the world that it was game, set and match after 12 minutes. The Foxes found some fight in the second-half to bring it back to 2-2 before another pair of goals appeared to settle the tie and reward each side with a deserved point. That was until an injury time winner from hat-trick hero Diego Jota sent Molineux into raptures.

The theatrical nature of it all was perfectly encapsulated in the emotional reactions of the two managers throughout the game, but especially at the end.

Nuno Espirito Santo instinctively ran towards his players in celebration with a look of pure ecstacy on his face, while Claude Puel buried his head in his hands in despair. The contrast could not have been more stark. More on the Frenchman later.

Goal of the Week:

This is possibly the toughest choice I’ll have to make this season, with numerous viable candidates for the week’s best goal.

Do I go with Marcus Rashford, whose wonderful finish from an acute angle won the game for Manchester United? Do I plump for Fabian Schar, who cut a hole through the Cardiff City defence before executing a terrific finish? Or do I go with Demarai Gray, who, in similar fashion to Schar, used pace, skill and sheer force of will to score the best effort in a goal fest?

Any one of those could win this category on any given week, but I’m going for Callum Wilson‘s thunderbolt against West Ham United. Sure, it didn’t require as much skill as the other nominees, but the Bournemouth striker’s composure and the sweetness of the strike edge it for me. There will hardly be a more satisfying thwack in the Premier League this year.

Pass of the Week:

There’s a reason why Man City apparently want Ruben Neves so badly, and it’s because of passes like this one to Diego Jota.

Manager of the Week:

Ole Gunnar Solskjaer isn’t reinventing the wheel at Man United, but he is reinvigorating the club as a whole. The Norwegian became the first Red Devils manager to win his first six league games, and now a Top Four spot doesn’t seem so outlandish. Imagine saying that a month ago?

If Speroni plays the 1970s will maintain its record of being the only decade to provide players for every single PL seasonhttps://t.co/ECaYXXhqEu

The Argentine goalie is also the longest-serving player in the Premier League, having made his debut in 2004 against Everton.

Claude Puel is not exactly a man who wears his heart on sleeve every Saturday, his reserved and calm nature more reminiscent of a university lecturer than a propah football man. But on Saturday afternoon we saw more emotion from the Frenchman in 90 minutes than we have in the three years he has been in England. The importance of this result was evident in his reactions on the touchline.

A few weeks ago I wrote about the dilemma facing Leicester City when it comes to their manager, Claude Puel. Do they plump for stability under a tactically boring manager, thus accepting mid-table mediocrity? Or do they do a Southampton and sack Puel in the hope that their ambition can be quenched by a coach with a more expansive style of play?

While this game didn’t quite clear up that conundrum, it didn’t necessarily help Puel’s cause. It was a damn sight more exciting than the majority of performances during his tenure, but it reinforced the inconsistency inherent in his squad this season. The team’s inability to get results out of games such as these may be his undoing come season’s end.

Bullshit Transfer Rumour of the Week:

It’s that time of year when all sorts of transfer tomfoolery emerges online, and we must all brace ourselves for the overwhelming smell of bullshit. Thankfully much of it is confined to football forums tucked away in the corner of the internet or the ITK Twitter accounts which the majority of us thankfully have the good grace to ignore.

Sometimes, however, the poisonous gas leaks out into the atmosphere and the air we breathe becomes polluted. That’s what happened last week when Giuseppe Rossi to Spurs was mooted as a possibility, accompanied by the ever-helpful refrain “according to reports”.

Despite being a unsubstantiated rumour based off nothing but a random combination or factors – in this instance, Team X have an injury, Player Y is available – it still made its way into the mainstream. The rumour was put to Mauricio Pochettino, who predictably shot it down, but his mere acknowledgement of the question was enough for every online outlet to report on this ‘update’.

Donkey of the Week:

This most esteemable of prizes goes to referee Chris Kavanagh, who sent off Wolves manager Nuno Espirito Santo for running onto the pitch after his side’s late winner against Leicester. Although it’s a tad bit cruel to punish someone for celebrating, the rules are the rules and you could hardly fault the ref for enforcing them.

The problem is that the same rule was not applied to Jurgen Klopp when he sprinted onto the pitch and into the arms of Alisson Becker following Liverpool’s last gasp winner against Everton in December.

The referee that day? Chris Kavanagh.

Inconsistency at its finest by Premier League referees.

Klopp runs onto the pitch to celebrate the winner against Everton – nothing happens.

Nuno Espirito Santos runs over to his players to celebrate the winner today – sent off.

Klopp was charged by the FA and fined £8,000 for his actions, and the same is in store for Nuno who has charged with misconduct on Monday. Everyone understands the need to enforce the rules, but I must tell you, dear reader, the rules suck.

A Charlton fan accidentally took out one of their own players in the celebrations. 😂pic.twitter.com/g2efPt2ZjA