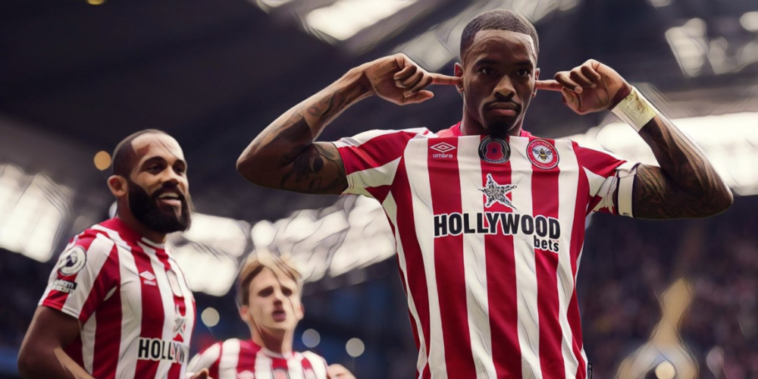 Antonio Conte will be concerned with Spurs’ slow starts, but his team have at least demonstrated powers of recovery in recent weeks.

Spurs showed spirit to come from behind and earn a crucial win this weekend, having trailed on THREE occasions before fighting back to beat Leeds.

It was enthralling entertainment at the Tottenham Hotspur Stadium, a chaotic clash that saw Rodrigo Bentancur score twice late on to turn defeat into victory for the home side.

The Uruguayan’s winner came just moments after his equaliser, as Spurs snatched it late on to claim a dramatic three points in the capital.

It was the first a Premier League team had trailed three times before coming back to win since December 2012.

Are you watching, Gareth Southgate?

Ivan Toney’s exclusion from the England squad made headlines this week, with the forward left out of the Three Lions’ plans for the World Cup in Qatar.

Rarely has there been such noise around an uncapped player, after Toney failed to make his debut during a first senior call up in September. His continued excellence in the Premier League has led to criticism of his omission, however, with the 26-year-old offering up the ideal response this weekend.

Toney was outstanding as Brentford won at Manchester City, scoring twice – including a stoppage-time winner – to provide the sting for the Bees. His all-round performance was brilliant, as City struggled to deal with his physical threat and intelligent link-play as Brentford’s focal point.

Saturday: Ivan Toney scores his 20th goal of the year… against Man City.

Up against the Premier League champions, Toney appeared unplayable on occasion as he bullied the host’s backline at the Etihad. Brentford’s direct approach was rewarded as the Bees utilised the threat of their talisman, who has now scored 18 league goals in 2022. Only Harry Kane has scored more among English players. Only one of those names, oddly, will be on the plane to Qatar.

Joe Willock was at the heart of a statement win at St James’ Park, as Newcastle strengthened their position in the top four with a 1-0 win over Chelsea.

Willock scored the decisive goal with a stunning strike from the edge of the area, as he arrived to slam home the winner. The midfielder’s bursts forward were a threat all game for Newcastle and he will be disappointed the World Cup break has arrived as he has begun to hit top form.

It’s back-to-back goals in the Premier League for Willock, who is part of a Newcastle team increasing in confidence. Eddie Howe’s team have now faced five of the ‘Big Six’ so far this season and have lost just once.

Liverpool improved their hopes of a top four finish with a 3-1 win over Southampton as Anfield, as Roberto Firmino’s opener and Darwin Nunez’s brace earned all three points.

However, the Reds – not for the first time this season – required an excellent performance from Alisson in goal. The Brazil international has been Liverpool’s most consistent performer this season and made a number of saves against the Saints, including a brilliant reactive stop to palm away Che Adams’ headed effort.

3 – Lewis Dunk has conceded a penalty in three of his last four appearances in the Premier League, having not given away a penalty in any of his first 182 games in the competition beforehand. Rut. pic.twitter.com/uGsT1q0FPk

It’s been an unwanted distraction during Erik ten Hag’s debut campaign, but there appears no coming back from Ronaldo’s latest outburst. Cristiano’s cringeworthy supporter Piers Morgan will no doubt have reveled in this exclusive, one in which Ronaldo criticises the club and admits he has no respect for Ten Hag.

It’s time to cut ties, with Ronaldo’s relationship with the Red Devils a sour sideshow that has surely reached its conclusion.

Emotions were high for those on the South Coast this weekend, as the traveling Everton fans voiced their anger at another poor performance from their side.

Thrashed in the Carabao Cup at Bournemouth just days earlier, those who made the long trip to the same venue saw another sorry showing as the Toffees crashed to a 3-0 defeat.

Everton’s attempts to apologise at full-time were not well received, with one fan throwing back the consolation shirt offered up by Alex Iwobi. Perhaps not the ideal time to present a souvenir to the supporters…

Everton fans throw Alex Iwobi’s shirt back at him 😭😭
pic.twitter.com/lnhIvZuJCr

Jordan Pickford endured a performance to forget against the Cherries. England’s number one gifted the home side the opening goal, as he spilled Domonic Solanke’s tame effort to allow Marcus Tavernier to poke home an opener.

It was a moment that set the tone for the Toffees, who hover nervously outside the bottom three as the season pauses for the World Cup.