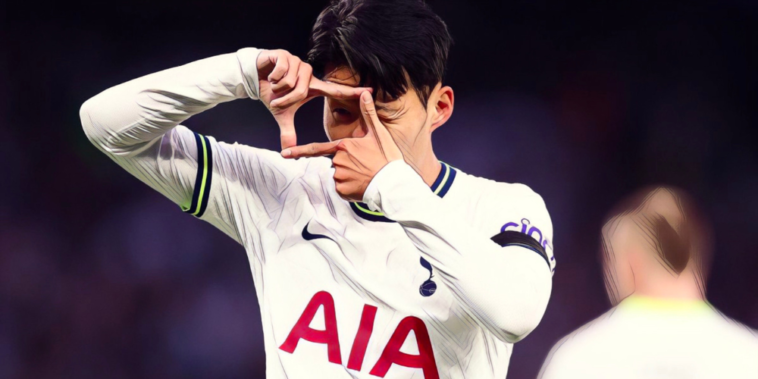 There was a record-breaking moment in the closing stages of Arsenal’s 3-0 win at Brentford, as fifteen-year-old Ethan Nwaneri came off the bench to become the youngest player in Premier League history.

Nwaneri was given his debut as the Gunners moved back to the top of the Premier League table, with the travelling north Londoners fittingly echoing out into a chorus of ‘he’s got school in the morning’.

A special moment for the @Arsenal youngster 👏 pic.twitter.com/KUNKy1iO6u

The midfielder became the first u16 player to make an appearance in the Premier League and at 15 years and 181 days old, obliterated the previous record held by Liverpool’s Harvey Elliott, who was 16 years and 30 days when he made his debut in the division for Fulham in 2019.

To put into context Nwaneri’s achievement, he wasn’t even born when the Emirates Stadium was opened in 2006.

It turned out to be bus-like case of waiting for Son Heung-min, who after eight games without a goal for Spurs helped himself to three at once.

The South Korean started as a substitute against Leicester after a poor run of form, but made a devastating contribution from the bench as he scored a second-half hat-trick for Antonio Conte’s side.

Spurs were ruthless after the break to pile the pressure on the struggling Foxes, with Son’s treble including two sensational finishes bent beyond Danny Ward from distance. Perhaps only Kevin De Bruyne in the Premier League can lay claim to being as equally two-footed when shooting at goal, with Son’s first two goals coming off either foot from outside the area.

He then completed his treble after racing onto Pierre-Emile Hojbjerg’s pass to slide home, as he became just the seventh player to score a Premier League hat-trick as a substitute. Class is permanent.

A collection of candidates for this week’s award, with Son’s opening two goals and a piledriver from Fulham’s Joao Palhinha unfortunate to miss out.

Fabio Vieira takes our Goal of the Week accolade, after opening his Premier League account in fine fashion for Arsenal at Brentford. The midfielder made his first league start for the Gunners and marked the occasion with a brilliant bending finish, one which clipped the post on its way in for added aesthetic.

Fábio Vieira with a fantastic goal on his full Premier League debut! ⚽pic.twitter.com/GbqD3s2I8C

Bournemouth are on the rise under the management of interim boss Gary O’Neill and the Cherries are now unbeaten in three games after a 1-1 draw at Newcastle.

The introduction of Neto into the starting side has contributed to their increased defensive strength, with the experienced Brazilian an impressive performer at St James’ Park.

Neto signed from Barcelona during the summer and showcased the pedigree that has seen him enjoy a long career at a number of leading clubs, including this athletic double save from Joelinton and Ryan Fraser.

Leicester City are in serious trouble after a 6-2 thrashing at Tottenham, with the Foxes rock-bottom of the division following a winless start to the campaign.

Brendan Rodgers is under huge pressure after six consecutive Premier League defeats, while the manner of those losses – including back-to-back humiliations against Brighton and Tottenham – have seen the Northern Irishman’s odds to depart significantly shortened.

22 – Leicester's 22 goals conceded is the most any side has shipped after seven games of a Premier League season, and the most in the top-flight since 1965-66 (West Ham, also 22). Trouble. #TOTLEI pic.twitter.com/Vbvp6NaKlq

Leicester have now conceded a staggering 22 goals in the season. No side in Premier League history has ever conceded more at this stage of a campaign.

There was added praise from Frank for William Saliba, who has made a fantastic impact since returning from a loan spell at Marseille last season.

What a season William Saliba is having 🧱 pic.twitter.com/iHMCQ0Poa1

Erling Haaland won admirers for his outrageous kung-fu inspired goal for Manchester City in midweek, but it’s fair to say that Wolves’ Nathan Collins got his own martial art-themed moves all wrong this weekend.

The Republic of Ireland international was sent off inside 33 minutes against Manchester City, leaving his team – already two goals down against the champions – with a mountain to climb.

Collins crashed into Jack Grealish with a ludicrously high challenge, the result a painful stud-shaped imprint on Grealish’s mid-rift and an early bath for the centre-back.

Nathan Collins is sent off for this challenge on Jack Grealish 😳 pic.twitter.com/wKZqsEzERx

The 21-year-old has impressed since arriving from Burnley during the summer, but this was a lesson learned for Collins after a rash moment at Molineux.