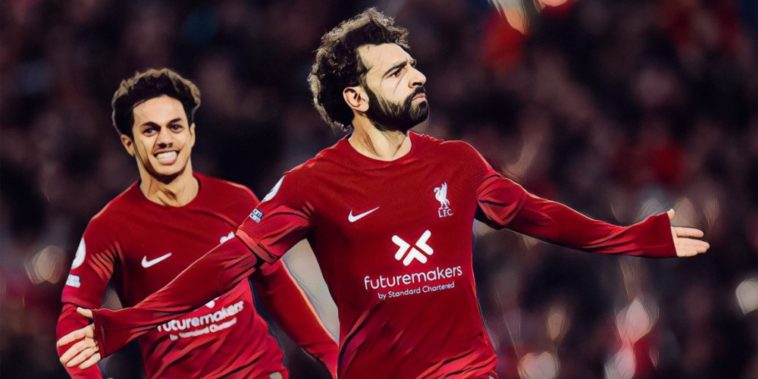 The weekend’s biggest game swung on a decision from the match officials, as Manchester City saw an opener ruled out in the club’s 1-0 loss at Liverpool.

Phil Foden thought he had handed City the lead after converting from an acute angle, but the goal was disallowed as VAR ruled there had been a foul on Fabinho in the build-up. The pull from Erling Haaland on Fabinho was penalised and there was unrest from City over the re-refereeing of a subjective incident, when Antony Taylor had initially allowed play to continue,

🗣️ "What we expect from referees is consistency" 😤

The reprieve for Liverpool lifted the Anfield crowd, who saw Mohamed Salah turn an over-committed Joao Cancelo with ease and race through to score a winner soon after.

The biggest fixtures often swing on the finest margins and Liverpool rode their luck to seal a morale-boosting and much-needed win. Had Foden’s goal stood, it would have been the eighth time in 13 fixtures this season that Liverpool had conceded the first goal.

How that would have impacted their confidence, against a City side who dominated possession, will never be known.

Liverpool’s win over Manchester City ended the last unbeaten record in the Premier League this season, with a number of stand-out performers for the Reds in an enthralling encounter.

Alisson was excellent in goal and Joe Gomez and Virgil van Dijk outstanding in dealing with the threat of Erling Haaland, but it was Mohamed Salah who proved the decisive figure at Anfield.

Jurgen Klopp used the club’s leading scorer in a more central role and it was a tactical tweak which worked perfectly as Salah’s darting runs caused countless problems. Salah came close to opening the scoring as Ederson saved superbly when faced with the Egyptian one-against-one, but the former made no mistake with a winning goal which showcased his brilliant best.

A HUGE GOAL FOR LIVERPOOL!

Mohamed Salah with the goal ⚽ pic.twitter.com/8Oab0vebHx

The 30-year-old cushioned Alisson’s long kick forward on the spin to leave Joao Cancelo in his wake, before he kept his cool to score a crucial winner for the home side.

Salah was electric in moments and should have had an assist after a wondrous cross for Diogo Jota, as Liverpool’s talisman came to the fore on the big occasion this weekend.

Ivan Toney celebrated his 100th appearance for Brentford in fine fashion, as he scored both goals in the Bees’ impressive 2-0 win over Brighton.

It’s now 55 goals in all competitions for Toney since his arrival at Brentford, with the 26-year-old enhancing his chances of a place in England’s World Cup squad.

Toney took his total to eight league goals for the campaign with a match-winning brace, the first of which came in sublime fashion as he improvised to back-heel home Frank Onyeka’s cross.

Kepa has had a turbulent time across three-and-a-half seasons in west London, having mixed fine performances with a struggle to deal with the expectation of his world-record price-tag.

He has returned to prominence under Potter and looks to have cemented his status as number one, after an outstanding individual display at Villa Park. The Spaniard made six saves in the first half alone, including this triple-stop to preserve Chelsea’s narrow lead.

Just moments later he produced an even better effort, as he somehow kept out Danny Ings’ header from point-blank range. His seven saves were the most a Chelsea goalkeeper has recorded in a Premier League fixture since the 2017/18 campaign.

Manchester United fell three points adrift in the race for the top four after a goalless draw with Newcastle at Old Trafford, with the Red Devils disappointing in the final third during a flat performance.

Cristiano Ronaldo dropped deep in search of involvement and saw two goals disallowed, before showing his exasperation after being substituted for Marcus Rashford 18 minutes from time.

The 0-0 draw was United’s 31st in the Premier League since Sir Alex Ferguson’s retirement, more than any other side in the division.

31 – Today was Manchester United’s 76th Premier League goalless draw, 31 of which have come since Alex Ferguson’s retirement in 2013 (41%) – the most of any side in the competition since the start of 2013-14. Stilted. pic.twitter.com/cQUsbCemII

Shithousery of the Week

Nottingham Forest’s pre-game taunt of Wolves appeared brave given the club’s precarious position at the bottom of the Premier League and it was one which came back to haunt Forest’s social media admin.

Ruben Neves’ penalty decided the game at Molineux, while Wolves’ own admin ensured it was two wins from two against Forest for the week.

How it started. How it ended. pic.twitter.com/iuw3al5yfo

With the pressure increasing on Steven Gerrard and Aston Villa, the centre-back picked an awful time to gift Chelsea an early lead at Villa Park this weekend.

Mings’ misjudged header came under no pressure and allowed Mason Mount to open the scoring, in a moment the defender will want to forget.

The England international’s error was the fifth he has made leading to a goal since the start of the 2019/20 season, more than any other outfield player in the Premier League.