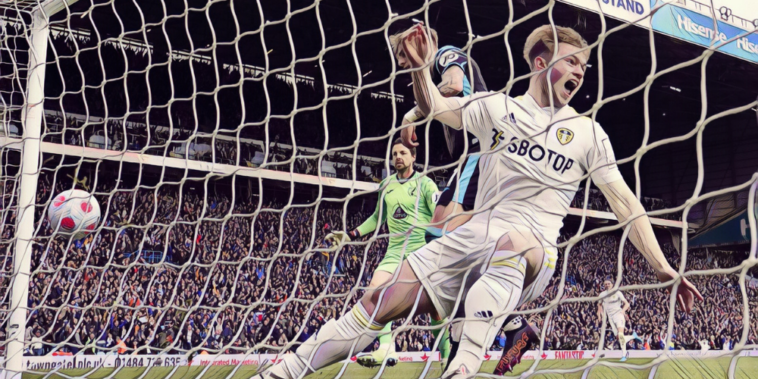 There was huge emotion at the London Stadium as West Ham opened the scoring against Aston Villa, the Hammers’ goal coming from the left boot of Ukraine international Andriy Yarmolenko.

The 32-year-old was named on the bench for the first time since Russia’s invasion of his home nation and it was perhaps written in the stars that Yarmolenko would come off the bench to put his side ahead.

It was a brilliant goal of touch and technique from Yarmolenko, who was overcome with emotion and moved to tears following his contribution to the Hammers’ 2-1 win.

It was a poignant moment and reminder of what is truly important amid the often all-consuming pressures of the Premier League.

"To be honest, I don't know what to say. I'm just so emotional and want to say thank you to my teammates, West Ham fans and all British people, because we feel your support."

An honourable mention must go to Joe Gelhardt and his last-gasp winner for Leeds at Elland Road, a chaotic conclusion to the club’s clash with Norwich ending in a much-needed three points.

Jesse Marsch is up and running after replacing Marcelo Bielsa at Leeds and the American will no doubt have been delighted with the mental strength his side showed after conceding a 91st-minute equaliser to the Canaries.

🤩 "Gelhardt is the hero!" pic.twitter.com/wh1RT4tjuu

It was a frantic finale and one that saw Elland Road erupt, the home side having squandered a host of chances before Gelhardt’s stoppage-time heroics earned Leeds a vital three points.

Cristiano Ronaldo produced his best performance since returning to Manchester United this weekend, a vintage showing from a goalscoring great to keep alive the club’s hopes of Champions League football.

Ronaldo has rarely been far from the headlines this season, with continued debate as to whether his presence has hindered or helped the Red Devils’ development this season.

The 37-year-old was on a run of one goal from ten games heading into a must-win showdown with top-four rivals Tottenham this weekend, but provided an emphatic response to his doubters with a hat-trick in a 3-2 win at Old Trafford.

14 – Cristiano Ronaldo scored his second Premier League hat-trick and first since January 2008 against Newcastle. His two trebles were separated by 14 years & 59 days, the longest gap between hat-tricks for a player in Premier League history. Longevity. pic.twitter.com/UaOf7CU3yU

It was a classic performance from a man who has now scored more goals than any other player in football history, each demonstrating an aspect of Ronaldo’s clinical qualities.

A long-range stunner was followed with a predatory second and a towering header to claim the match-ball, a display which saw Ronaldo use sheer personality to get his side over the line.

Only Mohamed Salah has now scored more Premier League goals this season than Ronaldo, and attentions now turn towards his favourite tournament and a Champions League last-16 second leg with Atletico Madrid.

Ronaldo’s rocket to open the scoring against Spurs was a worthy contender for this accolade, but the brilliance of Kai Havertz’s winner for Chelsea is our Goal of the Week.

Newcastle had frustrated Chelsea for much of the contest at Stamford Bridge and looked to be heading towards a goalless draw, before Havertz produced a moment of nonchalant genius to seal all three points for the west Londoners.

Kai Havertz wins it for Chelsea in spectacular fashion, 𝗦𝗖𝗘𝗡𝗘𝗦! 🤯

There was a certain Dimitar Berbatov-feel to Havertz’s 89th-minute winner, an adhesive first touch and finish that saw the Germany international make the extraordinary look effortless.

Aaron Ramsdale has proven an inspired signing for Arsenal this season with the goalkeeper registering his 12th clean sheet of the campaign in the 2-0 win over Leicester.

That figure has already matched the Gunners entire total from last season and Ramsdale produced a strong save from Harvey Barnes’ point-blank header to ensure another shut-out at the Emirates.

Brendan Rodgers – who saw Ramsdale keep out James Maddison’s free-kick in excellent fashion during the first meeting between the sides this season – provided a brilliant reaction after seeing the 23-year-old thwart his side once again.

Brendan Rodgers' reaction to that Aaron Ramsdale save in the first half 😂 pic.twitter.com/FcgVnZ2u6j

The Leicester boss was full of praise for Ramsdale post-match and believes the Gunners’ goalkeeper should be in contention for the England number one shirt ahead of March’s international break.

“For me he’s the best English keeper at the moment,” Rodgers said post-match. “He’s top. His progression since he came to Arsenal, he’s dealt with that really well. He’s got a really nice calmness to his game.”

It’s beginning to look bleak for Frank Lampard and Everton, who now sit outside the Premier League’s relegation places only on goal difference.

Lampard’s arrival has failed to turn around the fortunes of a struggling side and it’s five defeats in six Premier League fixtures since the 43-year-old’s arrival at Goodison Park.

The threat of relegation is getting increasingly more real for Everton, whose 22 points from 26 games is their lowest ever total at this stage of a league campaign.

22 – Everton have 22 points from 26 Premier League matches this season, their lowest ever tally at this stage of any league campaign (assuming 3 pts/win all-time). Duldrums. pic.twitter.com/3qDZelxWum

Everton look a sinking ship and their cause has not been helped with inconsistent tactics and poor performances.

This weekend’s defeat to Wolves was another blow to their chances of survival, with Jonjoe Kenny’s red card all but ending hopes of a comeback.

The defender picked up two bookings inside just four second-half minutes, the second for a brainless lunge at Raul Jimenez that handed the referee an easy decision to make.

Having been the one pushed in front of the cameras to give Everton a rallying cry after last week’s 5-0 thrashing at Tottenham, it was not a good look for the full-back as he made his side’s challenge an even greater one.