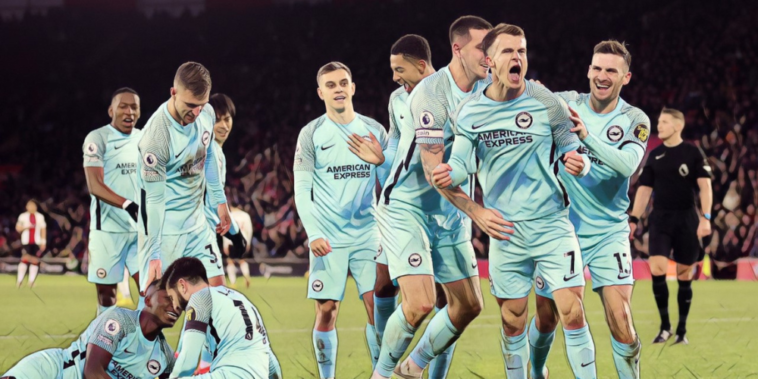 Our weekly Premier League awards honour the best – and worst – of the football action from the Boxing Day fixtures.

Wolves left it late to secure Julen Lopetegui a debut win as manager, snatching the points late on in a dramatic six-pointer with fellow strugglers Everton.

Lopetegui’s new side could hardly have begun in worse fashion as Yerry Mina headed in an opener for Everton after just seven minutes, but Wolves bit back to come from behind and claim a priceless win.

Rayan Ait-Nouri scored a stoppage-time winner to spark jubilant scenes from the visitors, who secured a first away win of the season to move off the bottom of the Premier League.

The late, late drama lifted Wolves and piled the pressure on Frank Lampard and Everton, who have lost three consecutive Premier League games and six of their last eight.

An honourable mention goes to Bruno Guimaraes, who celebrated this, somewhat trivial, block as if the full-time whistle had just blown in a victorious cup final.

There’s something simultaneously amusing and commendable about players celebrating the less glamorous side of the game, and his willingness to work epitomises a Newcastle team daring to dream.

Bruno Guimarães is one of a kind 😍 pic.twitter.com/iXTdXdV4U2

Fulham’s impressive return to the Premier League continued with a 3-0 win at Crystal Palace, as the Cottagers capitalised on two red cards for the home side to record a comfortable win.

It was the menace that is Aleksandar Mitrovic that did the damage for Fulham, as the forward helped himself to a goal and two assists.

He created the first goal with a brilliant cross for Bobby Decordova-Reid to glance home a header, before demonstrating his threat in the air to nod down a set-piece and assist Tim Ream’s second.

Palace were bullied and bruised as Mitrovic dominated duels and proved a threat in the air, with the Serbian rewarded for his centre-forward clinic with a goal of his own.

Mitrovic’s goal was his tenth in the Premier League this season, just one short of the career-best haul he managed during the 2018/19 campaign. He now has a staggering 125 goals and assists in 190 appearances for Fulham, who sit just outside the European places.

Solly March has had to wait some time for a Premier League goal.

Since scoring away at Aston Villa in November 2020, the Brighton winger has waited 766 days and 62 shots on goal to next hit the net. His 27 shots without scoring was the most in the Premier League this season, but it’s fair to say his drought-breaking effort was one to remember.

What a goal from Solly March!

Miss(es) of the Week

Jurgen Klopp insisted that Darwin Nunez played an ‘incredible game’ despite his wastefulness around goal during Liverpool’s 3-1 win at Aston Villa.

As ever, the centre-forward caused chaos for the opposition backline with his raw mix of pace, power and industry, but lacked the composure required when presented with goalscoring chances.

His four big chances missed were the joint-most in a Premier League fixture this season.

Darwin Nunez missed as many big chances (4) as he completed passes (4) vs. Aston Villa.

The away team is now unbeaten in the last 11 Premier League meetings between the teams.

Southampton and Brighton have faced each other 11 times in the Premier League… did the home team win?

There was little festive cheer for Crystal Palace fans this Boxing Day, as the Eagles suffered a humbling home loss to Fulham.

Things went from bad to worse for Palace, who conceded an early goal to Bobby De Cordova-Reid before seeing Tyrick Mitchell sent off for a high challenge before half-time.

James Tomkins then gave the home side a mountain to climb with a second booking, as the central defender put a high arm across Aleksandar Mitrovic. Sure, the Serbian striker made the most of it, but it was a stupid moment from an experienced player, already on a caution.

Palace are down to nine! 😳