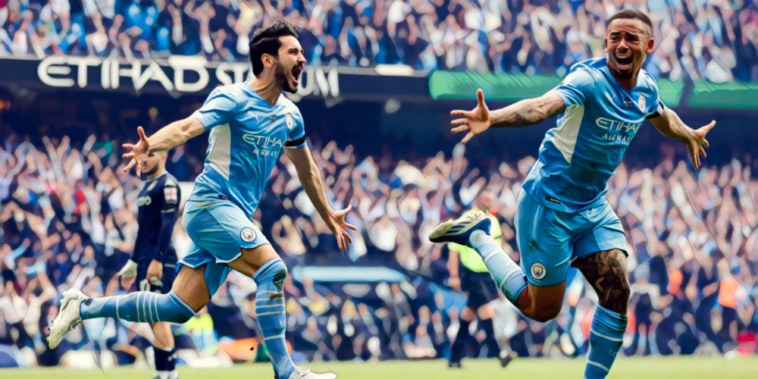 Could it be anything else?

Four times Manchester City have needed to win on the final day of the season to win the Premier League and each time have done so, though once again, the newly-crowned champions did it the hard way.

City saved one of their poorest performances of the season for their title-decider with Aston Villa and for 76 minutes it looked like the visitors were set to end the club’s Premier League hopes.

Guardiola’s side were two goals down at the Etihad, before five minutes of madness saw City turn the game around in a thrilling conclusion to their championship campaign.

Time to take a look behind-the-scenes at the dressing room celebrations! 🎉🎥 pic.twitter.com/REq70Uqsq9

It was pure footballing theatre on the final day of the Premier League season as City endured a rollercoaster ride to seal their fourth league title in five seasons.

In need of a hero, Manchester City found one in Ilkay Gundogan.

The midfielder has been linked with an exit this summer, but should he depart will do so having played an instrumental role in one of the club’s great Premier League moments.

Gundogan came off the bench to inspire the club’s turnaround from two goals down against Aston Villa, scoring twice including the title-clinching winner at the Etihad.

The German’s ghosting runs from midfield helped transform the game for a City side who had struggled to break down the visitor’s stubborn rearguard, with his header at the back post proving the catalyst for their comeback.

His second – turned in after an exquisite cross from Kevin De Bruyne – could be his final in City colours and it will be one the 30-year-old will never forget.

Spurs earned a big win at Norwich to secure a top four finish and Champions League football, with a perfect afternoon for Antonio Conte’s side including a double for Son Heung-Min.

A world class way to win the Golden Boot 👏 pic.twitter.com/OsFVjxxdm5

The 29-year-old’s second was something special as he bent a superb finish into the far corner, curling an effort beyond Tim Krul from the edge of the area.

Meanwhile, in the same game, Dejan Kulusevski earns our Miss of the Week accolade, after the Sweden international squandered a glorious chance in Spurs 5-1 win at Norwich.

The 22-year-old raced through on goal before rounding Tim Krul, but lost his footing when presented with the simplest of tasks of rolling the ball into an open goal.

His feeble effort allowed Max Aarons to recover and clear from the goal-line, though he redeemed himself moments later with an unstoppable finish into the top corner to bring an end to an impressive first six months in the Premier League.

Mohamed Salah missed out on the Premier League title this weekend, but there were individual accolades for the Egyptian after another brilliant campaign.

Salah claimed the FWA Footballer of the Year award last month, a recognition of a season that has seen the 29-year-old lead the Premier League for both goals and assists.

He shares the Golden Boot alongside Son Heung-Min on 23 goals for the campaign, whilst the Liverpool star also edged teammate Trent Alexander-Arnold for the Premier League’s Playmaker Award.

Salah becomes just the fourth player to finish top for goals and assists in the same season, after Andy Cole, Jimmy Floyd Hasselbaink and Harry Kane.

Ilkay Gundogan sent a classy tribute to title rivals Liverpool in the aftermath of Manchester City’s thrilling win over Aston Villa, congratulating the Premier League runners-up on another strong season.

The Reds finished one point behind City for the second time in four seasons and Gundogan believes the level of Liverpool has pushed the champions and made the Premier League more ‘attractive’ as a result.

🗣 “I think they [Liverpool] played an incredible season.”

Referee of the Week

Ok, this award isn’t a regular feature and will more than likely never be repeated, but we couldn’t let this final full-time whistle from Mike Dean go without a mention.

An emotional looking Dean blew the final whistle on his Premier League career after Chelsea’s 2-1 win over Watford and did so in trademark theatrical style.

Mike Dean’s final Final Whistle. We may never see his like again… 🙏 pic.twitter.com/xJjJ4DKs53

Defeat at Crystal Palace was a sixth straight away loss for United, their longest run in more than four decades and a result that brings an end to the club’s worst-ever Premier League campaign.

West Ham’s failure to win at Brighton ensured United did not drop out of the Europa League places, the sole consolation from a poor performance at Selhurst Park.

The watching Erik ten Hag will be more than aware that he faces a major rebuilding job, following his first glimpses of the struggling side he will inherit this summer.